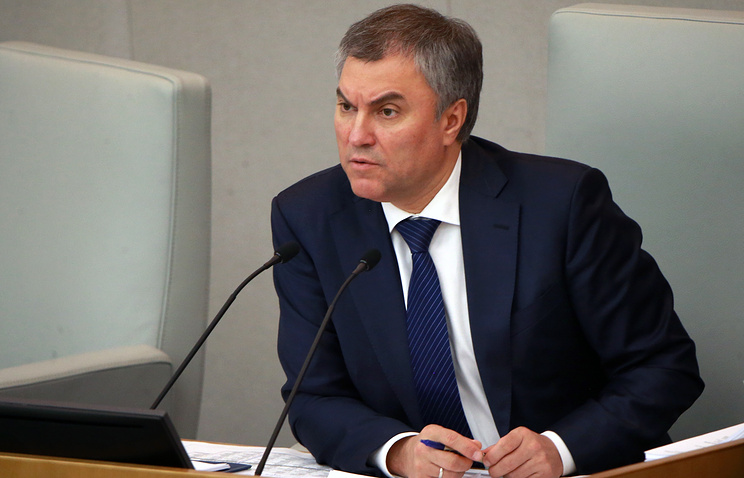 MOSCOW, may 24. /TASS/. Russia should protect the rights of their fellow citizens who live in Ukraine. This was stated by the speaker of the state Duma Vyacheslav Volodin, commenting on the adopted by the lower house an address to the parliamentary Assembly of the OSCE to condemn the President of Ukraine on the ban on its territory the popular Russian social networking and Internet resources.

“We must protect the basic human rights in Ukraine, in other countries, because we are members of the European community and our colleagues in the OSCE parliamentary Assembly and other parliamentary institutions must understand what is happening – fundamental human rights are violated”, – he said.

“Ukraine is our neighbor, where our compatriots. It is important that there the rights of citizens preserved”, – said the speaker.

The adopted appeal to the OSCE PA, deputies of the state Duma urged to condemn “the illegal actions of the Ukrainian authorities and to request the cancellation of their decisions that violate the fundamental rights and freedoms of man.” In the document, the parliamentarians condemn the lock on the territory of Ukraine in social networks “Vkontakte” and “Classmates”, as well as all the resources of Internet services “Yandex” and Mail.ru.

“As a result of this decision, millions of users in Ukraine were deprived of the opportunity to communicate freely and to Express their position, to support cross-border familial and professional contacts,” the letter reads. Thus, says the state Duma “in the eyes of the international community the formation of an authoritarian state, based on ideas of national supremacy, xenophobia, ethnic and religious hatred, suppressing dissent, freedom of speech and severely limiting unfettered access to information.”

The appeal States that the decision of the President of Ukraine also violates the Constitution of this country, which proclaims that “everyone has the right freely to collect, store, use and disseminate information by oral, written or other means of their choice”.