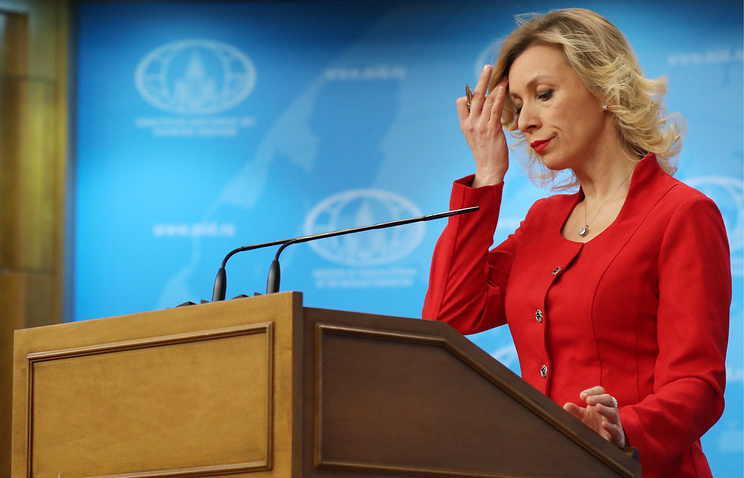 MOSCOW, may 30. /TASS/. Ratification by the Netherlands of the Association Agreement between the EU and Ukraine will let Kiev still some time to feed the Ukrainians with tales of the “bright European future”. This was stated by the official representative of Russian foreign Ministry Maria Zakharova.

“As for the Kiev authorities, ratification of the ill-fated agreement will give them some time to continue to feed the Ukrainians with tales of the “bright European future”, which was significantly poorer after taken to ensure ratification of the legally binding decision of 28 countries-EU members, – said Zakharov. – Let me remind you that it clearly stated that the Association does not grant Ukraine the status of a candidate country to the European Union”.

“While Kiev continues to ignore the rapid transformation of Ukraine from industrialized countries into agrarian and raw materials appendage of the EU. Hope is the wisdom of the Ukrainian people, who will be able to understand”, she said.

Zakharova also said that the Dutch people, saying “no” to Association with Ukraine, “wrapped around your finger.” The diplomat stressed that Russia does not interfere in questions of mutual relations of third countries. She noted that the leadership of Russia immediately after the start of provisional application of the agreement between the EU and Ukraine has taken adequate and at this point extensive measures to protect the domestic market.

“It should be recalled that to save in the new conditions of the Russian-Ukrainian trade and economic relations we were offered to settle in a legally binding form of the Russian concern associated with the introduction of the rules and regulations of a deep and comprehensive free trade area EU – Ukraine. The fact that Brussels was found by a legally binding decision that paved the way for the ratification of the Association Agreement in the Netherlands, refutes the claims of our opponents about the impossibility of such a settlement”, – noted Zakharov.

“Over the past year in Russia – and the world – watched with interest as the supporters of the so-called European future of Ukraine fourteen months sought a way out of the situation after the referendum in the Netherlands, where Dutch people have clearly and unequivocally stated its rejection of the idea at any cost to tie Ukraine to the European Union, – continued the diplomat. And that happened in spite of a powerful indoctrination on the part of Brussels (not only Brussels) strategists, own leaders and political assault from Kiev.”

According to her, is to leave “the conscience has lost face Dutch politicians of their, to put it mildly, controversial methods”.

“Predictable at a recent debate all again reduced to unsubstantiated allegations about provocative actions of Moscow, the words to a pan-European solidarity in the face of the mythical “Russian threat” and the like”, – said the representative of the guardian. “However, follows from all this sad conclusion: the Dutch people, saying “no” to Association with Ukraine, was duped, she stated. – Did it of his own leaders, once again employed the openly Russophobic propaganda, which, incidentally, is a direct confirmation of the anti-Russian essence of the Association Agreement EU – Ukraine, how much would any of us have claimed to the contrary”.