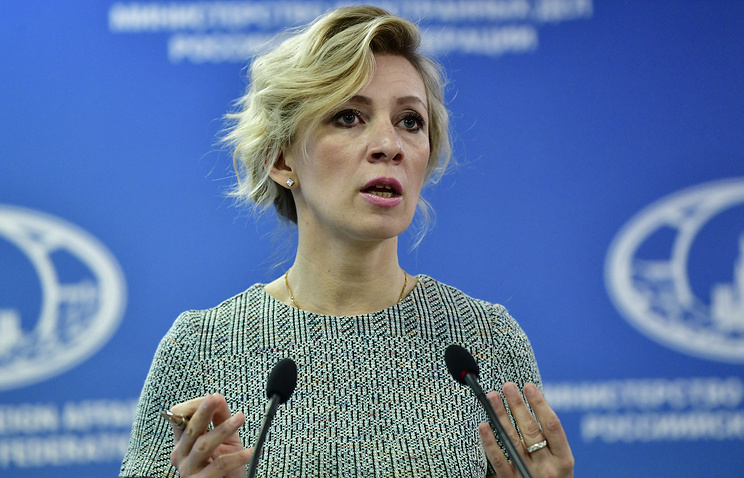 VLADIVOSTOK, June 8. /TASS/. The official representative of Russian foreign Ministry Maria Zakharova invited leading CNN’s Christiane Amanpour to visit Syria and to take an honest interview with a Syrian boy, Omran Dachnica who suffered during the alleged airstrike in Aleppo.

As noted Zakharova, numerous players in the region and beyond are trying to use fake information to implement the idea of regime change in Syria. “This obsession has nothing to do with the efforts that should be concentrated all the potentials we are talking about terrorism, the diplomat said. – Playing on the feelings and emotions of the audience, they set up the international community in the right way in order to be able to produce real and virtual agenda, completely forgetting about the principles of morality and impartiality”.

“You remember the famous picture of a boy from Eastern Aleppo Omran Dachnica who call themselves rescuers from pseudo-humanitarian organization “White helmets” pulled from the wreckage of the house in dust and blood after alleged strike of government aircraft, she said. His photographs became a symbol of the struggle with the regime, and the eternal wrongness of Moscow”. “We were able to learn about what it was for the story, reporters found a family of that boy, – continued the diplomat. – It turned out that the boy is alive and, despite what we were told, he was still healthy, the whole situation around him was perverted by Western reporters, and the family is not in opposition to the regime.”

Zakharov said that now the family of Omran Danisha receives death threats. “Those who exploited the image of this boy, did not think neither about his life nor about what awaits him then, because he is in a country that for many years torn apart by fighting terrorists, she said. – Have you thought about it (leading CNN Christiane) Amanpour? Of course not, she thought only about how to help the democratic party and democratic candidate to become President of the United States.”

“If Christiane Amanpour started this story in the public space, maybe she will have enough courage, journalistic ethics and human conscience and terminate? Namely, to go to Aleppo to find this family and make a real story about this boy, about how his photograph and the fate of Syria the American media is manipulated by many years – was proposed by the Russian diplomat. – We have asked our Western colleagues to visit Syria, are ready to provide all available opportunities.”

“I understand that you don’t want, which is useful every day to disperse the fake story, but you caught by the arm guys have to answer,” – concluded Zakharov.