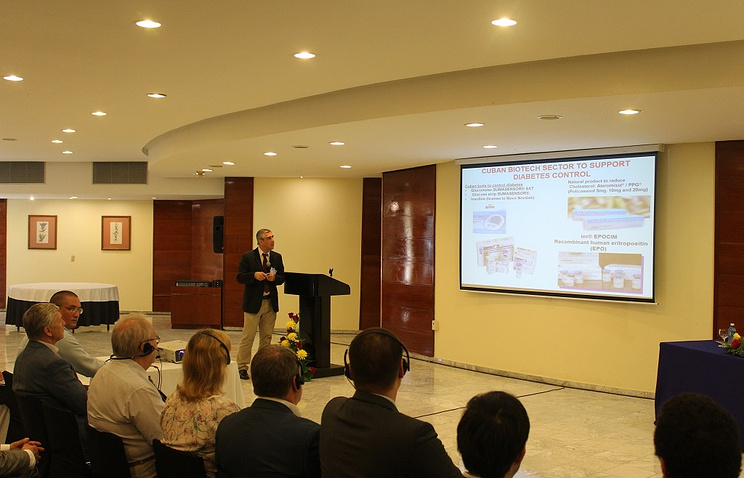 HAVANA, June 16. /Offset. TASS bekrenev Andrei/. The first Russian-Cuban medical pharmaceutical business forum opened on Thursday in Havana. Its goal is the development of cooperation between Russia and Cuba in the field of medicine, pharmaceuticals and biotechnology, the presentation of industry companies as well as networking between universities, research institutes and technological parks of the two countries.

From the Russian side the forum was attended by representatives of the Ministry of health and CEOs of the largest pharmaceutical manufacturers and research institutions, including Scientific center of expertise of medical application products, SKOLKOVO Fund, Association of Russian pharmaceutical manufacturers, Saint-Petersburg Institute of vaccines and sera, “Microgen”, “Biocad”, “pharmasyntez”, “Eidos-Medicine” and “Petrovax farm”, Saint-Petersburg national research University of information technologies, mechanics and optics.

“Cooperation between Russia and Cuba in the field of biotechnology and pharmaceuticals has great potential. This forum will help to determine the projects that would collaborate Russian and Cuban companies. We want Cuba to use Russian biotechnology and pharmaceutical development, and Russia – Cuba,” – said in an interview with a TASS correspondent Eduardo Martinez, President of a leading Cuban biomedical group BioCubaFarma (“Biocubator”), which includes more than 90 companies and industrial associations. Martinez expressed hope that the forum will become annual and will be held alternately in Cuba and Russia.

The President of the BioCubaFarma told that among the unique products of the Cuban pharmaceutical industry, used in particular in Russia, the lung cancer vaccine CIMAVAX-EGF, a drug for the treatment of diabetic foot Heberprot-P, which allows to avoid amputation of limbs, as well as natural product, PPG to reduce cholesterol, derived from sugar cane.

“The Cuban biotechnology industry has 30 years of experience. The level of healthcare Cuba is not inferior to most developed countries,” said Martinez.

Objectives of the forum

The forum participants plan to discuss issues of bilateral cooperation in pharmaceutics, including the certification of Cuban pharmaceuticals for their implementation on the Russian market, the creation in Cuba of joint enterprises for production of medicines, opening of branches of the Cuban pharmaceutical companies in special economic zones and technological parks of Russia for drug development together with the Russian manufacturers and research institutes.

The forum is supported by Russian and Cuban ministries of health, embassies and trade mission of Russia in Cuba and the Trade-industrial chamber of the Russian Federation.

Development Director, cluster of biological and medical technologies of “SKOLKOVO” Ruslan altayev told to the correspondent. TASS that in the framework of the forum the Foundation has two main objectives. “The first task is to help the Cuban projects, which are under R & d, to find Russian partners, they are together become participants of “SKOLKOVO” and was able to get support in developing their new drugs and medicines. The second objective was to help companies – participants “SKOLKOVO”, which already have developed the technology or with the introduction in the Cuban market and, through him, to the markets of other countries in Latin America,” said altayev.

As noted in the interview with TASS, Russian trade representative in Cuba Alexander Bogatyr, this forum is very useful for Russian companies. “Many Russian participants had a first opportunity to directly meet the condition of the Cuban biotechnology industry and was pleasantly surprised by the high level of research and development of Cuban biotechnology”, – said the trade representative.

According to him, Cuba, despite the relatively limited financial resources, and American economic sanctions, has managed to create in the pharmaceutical industry and now exports its pharmaceutical products to 30 countries.

Russian trade representative also reported that many Cuban and Russian companies operating in the pharmaceutical sector, are now exploring opportunities for cooperation. “This is the case when cooperation is mutually beneficial. Cubans have the experience, achievements and developments, which are at a high international level and in which we are interested,” said Hercules. According to him, we can talk about Russian-Cuban cooperation in the field of scientific research, production of pharmaceutical products and their distribution on international markets.

The forum, which will end on 17 June, includes a visit to pharmaceutical companies and medical institutions, as well as the special economic zone in the port of Mariel, located 45 km West of Havana.