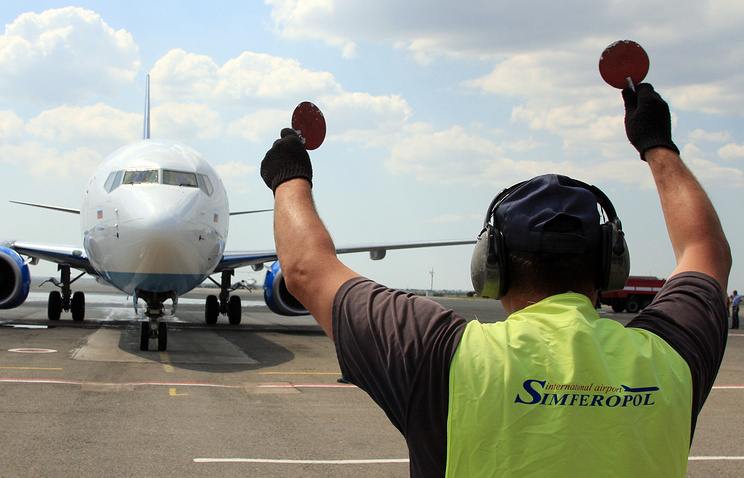 Subsidized tickets to Crimea are sold in all areas, the deficit is not observed, said to experts interviewed by TASS in the regions. Power of the subjects noted that at this moment there are no prerequisites for repeating problems in 2016, when the airline has not used the funds of the subsidies, creating artificial scarcity of places at special rates during the peak summer air travel.

This year the regional government together with the Federal air transport Agency ensure that the situation is not repeated. According to Rosaviation, for the program of subsidized transportation in the Crimea this year was allocated about 475 million rubles.

According to the latest information, the flow of tourists from January to may 2017 in the Crimea remained almost at the level of the last year on the Peninsula rested 807,6 thousand. Traditionally most tourists since the beginning of the year visited the southern coast of Crimea – 56% of the total. The West coast of the Crimea took 16% of the tourists, the East – 12%.

The preferential tariff in the Crimea

They added that in the six months of the program of subsidizing transportation to the Crimea, airlines will be able to send at discounted prices 141,5 thousand passengers.

“In 2017, the subsidy program was amended. Thus, the special tariff for flights in the Crimea is valid from 15 may to 30 November (previously from June 1 to November 30), total subsidies may be exercised in respect of the 61 route. The limit value of the specific rate in one direction per person depends on flight distance, ranging from 2.5 thousand to 12.5 thousand rubles. The flights are operated by domestic and foreign aircraft of type Boeing 737, Aerobus A319/320/321, Emblaer 190, An-148, Tu-204, Yak-42,” said the Federal air transport Agency.

According to authorities, the right to purchase tickets at a special rate are the Russians up to the age of 23 years, as well as pensioners, people with disability group I and accompanying persons, as well as the adults accompanying disabled children and disabled since childhood of II or III group.

In the regions where they sell discount tickets to Crimea have not yet seen their deficits. Sales dynamics at the level of last year. “The situation with the sale of subsidized tickets for flights from Kaliningrad is safe and is under permanent control, – TASS was told in the Ministry of infrastructure development of the Kaliningrad region. – Tickets are in all areas of subsidized transportation, there is continuous monitoring of the situation. The region exercises control in cooperation with Rosaviation”.

“At the moment there are no preconditions repeating problems in 2016, when the airline didn’t use the subsidies creating an artificial scarcity of places at special rates during the peak summer air travel,” added the Ministry.

The number of tourists at the level of 2016

According to the Executive Director of the Novosibirsk Association of travel organizations Svetlana Fomenko, in Siberia quite quickly sold out discounted tickets to the Crimea. How many of them left at the moment, the Association does not know, however, according to them, most likely find these tickets will be available only in September. “In September, the demand is less, including preferential categories, as the school year begins, and the flow of family tourists subsides. However, this does not mean that discounted tickets are not sold – they are bought and in September,” – said Fomenko.

According to her, due to limited quantity of discounted tickets that they are available to not all, so it’s better to warn about the plans of the tour operator in advance.

Additional flights to the Crimea and entered from St. Petersburg: “Rossiya airlines” increases number of flights to Simferopol on four nights a week. As explained by the official representative of the company, additional flights introduced in the summer due to the high demand of this trend as the residents of St. Petersburg and Simferopol. Flights under the SU code will be operated on Wednesdays, Thursdays, Fridays and Sundays on Airbus A319 two-class configuration: 8 seats in business class and 120 seats in economy class.

According to the Minister of resorts and tourism of Crimea Sergey Strelbitskogo, the situation in the airline industry, will allow to keep the number of tourists at the level of 2016.

“We do not sell subsidized tickets, as air and rail. If we talk about the dynamics of the tourist flow to the Crimea, from 1 January to 16 June 2017 we have served 1,173 million tourists, which is 3.8% lower than in the same period of 2016. The decrease of tourist flow I associate with access to the tourist market of our new – old partners, such as Turkey. Plus, the decline in tourist flow in the Crimea influenced the weather situation in June was rain,” – said strelbitskiy.

He added that at the moment Crimea is a plus of 32 degrees, the sea is warm, the weather has stabilized. “As we expected, and the expected arrival in the Crimea this year about 5.6 million tourists, like in 2016,” he added.

According to Dmitry Popov, Deputy General Director of tour operator “Alian”, to support the tourist flow to Crimea may be at the expense of expanding the category of tourists applying for subsidized tickets. Earlier in conversation with the correspondent. TASS he said that he was mainly flying to the Crimea to rest solvent people in the age of 25-30 years and above with children of preschool and school age. Popov noted that if this category of citizens had the right to purchase subsidized tickets, you would have observed increasing numbers of tourists in Crimea, because the Peninsula from many regions of the Russian Federation can only be reached by plane.

Chechen tour operators hope that already in 2018 the region will be able to get into the program of subsidized air travel to the Crimea, to which the Republic is closely cooperating in the field of tourism. Meanwhile, the Republic’s authorities have come up with an alternative discounted tickets: 1 April between Grozny and Sevastopol by bus with a stop in Krasnodar, Anapa, Kerch, Feodosia, Simferopol, Alushta, Yalta and Sevastopol.

Another region that has not become a participant of the program of subsidized transport Crimea – Belgorod oblast. Flights from June began to implement three of the carrier. Before opening direction, even unsubsidized tickets were sold out about half.

The Komi Republic was also unable to join the program of subsidized transportation in the Crimea – none of the airlines had not filed an application. The Ministry of industry, natural resources, energy and transport of the region are pinning their hopes on next year.

From 30 April, JSC “Russian Railways” (RZD) has also opened the sale of single tickets to the Crimea, which suggest a mixed transport of passengers using rail and sea transport. Selling the ticket will be carried out in seven cities: Kerch, Simferopol, Feodosia, Sudak, Evpatoria, Yalta and Sevastopol. Railways from April 30 to September 30, 2016, moved about 410 thousand passengers on a single ticket to the resorts of the Crimea.

Earlier, Deputy Prime Minister Arkady Dvorkovich noted that in summer the most popular routes to the South of the country. According to him, in the summer from Russia to places of recreation in the Crimea, Krasnodar Krai and the black sea coast of the Caucasus it is planned to appoint an additional 400 flights as last year. This is a flight of approximately 20 cities. Dvorkovich reported that further planned to relocate about half a million children to places of recreation. A special feature this year will be that reduced fare will be available only in second-class carriages.