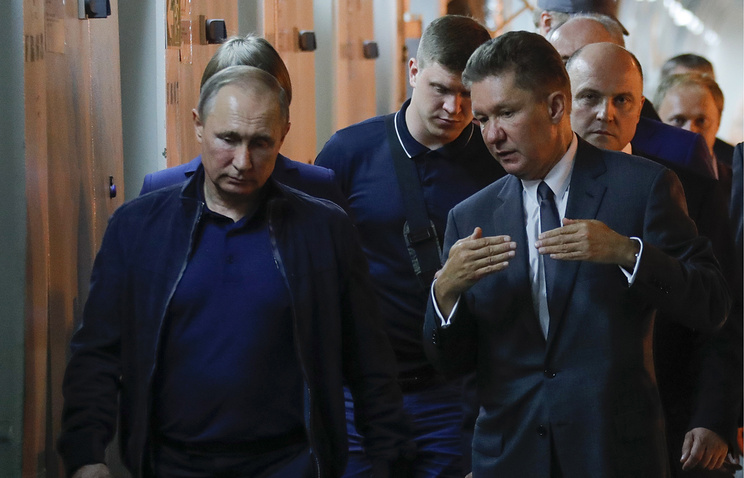 After meeting with Putin ship from the bridge and descended to the main welding shop, where at this time was carried out Assembly and welding work for connecting shallow and deep parts of the “Turkish stream.” It actually symbolizes the completion of the shallow part of the project and commencement of works on the depths of the Black sea.

The head of OAO “Gazprom” Alexey Miller informed the President about the parameters of parts of the pipeline. “All work on the construction and operation of the pipeline will be carried out in strict accordance with the latest international environmental regulations,” said Miller. According to him, the “Turkish stream” marketable”. “If we talk about the Turkish market, we see that demand for Russian gas is growing, even now, our deliveries account for 53% of the domestic market of Turkey. But from the beginning of 2017, the growth of shipments to the same period in 2016 will amount to 2 billion 630 million,” he said.

Miller noted that another gas market are the countries of southern and South-Eastern Europe. “In Europe, we also see very high growth rates for Russian gas. From the beginning of 2017 to mid-June over the same period last year growth of gas supplies to Europe amounted to plus 10.5 billion cubic meters of gas. In this region the growth rate is really impressive,” said the head of “Gazprom”.

According to the head of “Gazprom”, the supply of gas pipeline “will ensure reliable supply to our consumers.”

Then the Russian President pressed the button, launching the dock.

Features of the pipeline

As told, the pipe can be laid on coastal areas will have additional protective concrete coating. They are welded to the main pipeline on Board a specialized ship, each weld is checked automatically by ultrasonic system, and then on the weld seams is applied to a polypropylene coating to protect against corrosion. Gradually, truboprokat moving forward, placing new pipe sections to the seabed. According to experts, welding pipes on the ship are fully automated. Only six welding stations, the welding speed of one seam is approximately ten minutes. A two-kilometer pipe, which should slowly sink to the bottom, hold special device – tensioners. Then the pipe goes to the stinger, which sinks to the bottom.