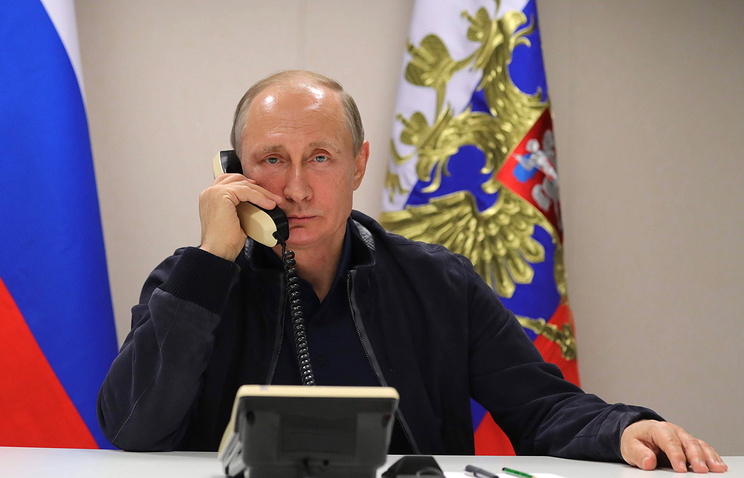 “If our partners want to – we will be ready to supply gas via Turkey to southern and South-Eastern Europe”, – he said during a telephone conversation with President of Turkey Recep Tayyip Erdogan from the vessel-pipelayer, which are involved in the construction of the gas pipeline “Turkish stream”.

“I assure you that we will adequately represent your interests, because our interests in this case coincide”, – he addressed to Erdogan.

The Construction Of “Akkuyu”

Putin believes that Russia and Turkey will be able to withstand the scheduled date of construction of NPP “Akkuyu”.

The Russian head of state thanked the Turkish counterpart for the fact that the Turkish regulator issued a license to operate a Russian operator. “If we keep moving at the same pace on other issues, we do not even according to the plans, in particular, we introduce the first unit nuclear power plant on schedule”, – said Putin.

“Akkuyu Nuclear” last week received a licence to generate electricity for 49 years. The company also reported that it expects by this summer to obtain a limited permit for the construction of the so-called non-nuclear parts, such as turbine island and auxiliary buildings and structures. Obtaining a base license is expected in 2018.

The high level of interaction

Putin noted higher than with other countries the level of interaction of Russia with Turkey.

“Turkey is developing projects as they do not develop with many other partners,” Putin said. “Where with others it takes us years to various administrative approvals, with Turkey we are doing this for several months and this happens of course as a result of your direct personal support”, – said the Russian President to his Turkish counterpart.

Putin recalled that in the autumn of 2016, an agreement was signed on the construction of “Turkish stream.” “And now, after seven months work has already begun,” – said Putin congratulated with this event Erdogan. The Russian President informed him that at present, work begins on the laying of deep-sea section of the “Turkish stream”.