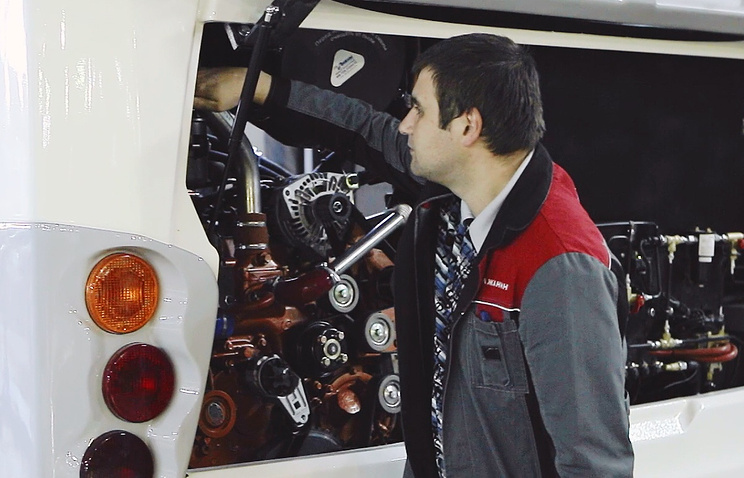 “The plant is ready to go for export. Until the end of the year, we hope, will be concluded first contracts. We are talking about the supply of at least 100 buses in the countries of the Middle East, and Africa,” he said.

According to him, domestic buses, “Volgabas” not inferior to the European and Asian direct competitors in its class. “And, importantly, they are cheaper,” said Bakulin.

After the “Russian Dolls” – the electric bus

“Volgabas” known for the development of unmanned bus “Matryoshka”. It was presented last year at the St. Petersburg international economic forum. “This year in St. Petersburg (“Matryoshka”) led the parade of vintage cars without a driver was 5 km away. This is the innovation. Now your drones are competitors. But we go further – developed 20-local “Matryoshka” – said Bakulin, noting that bus drone will be produced at other sites of the enterprise.

However by bus the nearest future the head of the enterprise said is not unmanned bus and electric bus. “It’s the perfect transport for the modern metropolis. By the way, the first electric bus “Volgabas” will be presented this year. And in 2018, will begin mass production of these machines,” – said the Agency interlocutor.

“If we talk about the domestic market, today we cover, without exaggeration, half of Russia. Buses operate in 40 regions, this year’s task is to increase that number to 50. The geography of deliveries to receive the Krasnodar, Rostov, Astrakhan, Arkhangelsk, Novosibirsk, Khabarovsk, Khanty-Mansiysk,” said Bakulin.

According to him, “Wagebase Volga” in 2017 it is planned to produce more than 600 buses – it is twice more than the year before. “How rapidly developing plant, the stats: for the third consecutive year the growth of production volume exceeds 50%, and not less than 40% per year increase productivity. Today the plant employs 800 people, two years ago it was 500,” said the CEO.

Currently, the Volgograd plant is the modernization of production total cost of about 1.5 billion rubles. Upon completion of the project in 2021, the annual volume of production of buses will increase to 1 thousand units. According to the CEO, this fall will complete the construction of the first phase will start production with an area of about 7 thousand square meters.

“It is planned to establish an Assembly, the chassis and buses of various classes. After entering the second stage will invite small and medium enterprises, who come together in a bus cluster,” said Bakulin.

He said that the company has done a great job on import substitution, if used for the plant was imported components from Germany and Turkey, now about 60% of the components purchased in Russia.

According to him, currently the plant manufactures modern buses, including for major sport events held in Russia. “Our machines “Volgabas” – the most popular in St. Petersburg. Put the plant in the Northern capital on the eve of the confederations Cup football 125 18-meter most modern “accordions”. Naturally, they will stay and serve the guests of the world Cup next year”, – shared his plans for the CEO.

Currently, the designers of the Volgograd enterprises are developing two new models of buses. “We are not in conjunction with their release in 2018, but they will appear before the tournament. There are already preliminary designs of future models, very soon you’ll see them,” said Bakulin.