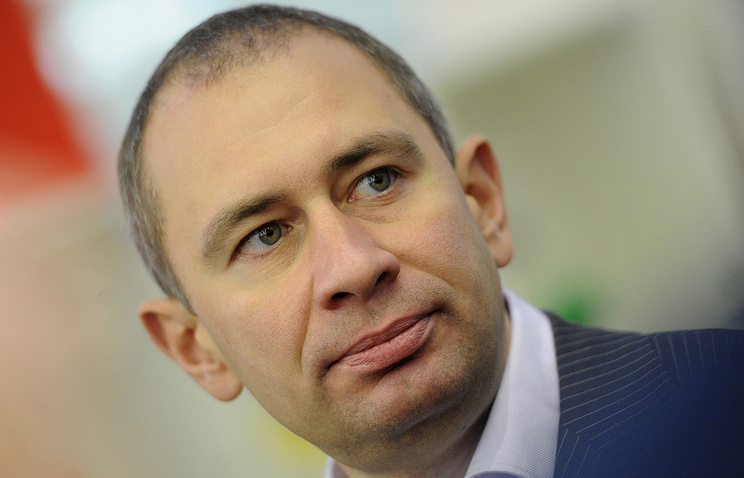 MOSCOW, June 24. /TASS/. Sistema sees no reason to pay money to settle a dispute with Rosneft, told reporters the President AFK Michael Shamolin on the sidelines of the annual General meeting of shareholders of the company.

“We don’t see this claim on the grounds that any pay. If we expect that we will come out with an offer to pay the money – it is unclear on what basis this proposal to do that,” he said.

Answering the questions of shareholders during the annual General meeting, Shamolin said that he hoped the dialogue with Rosneft under the settlement agreement. “We suggested in our understanding is a working and understandable mechanism of how a third party could dot the i in this dispute. Since the question of corporate relations is very specific, external expertise would be useful,” he said. According to semolina, three weeks since the first meeting of the court (on 6 June) no examinations had been made, and the AFC believes this is wrong.

While Mikhail Shamolin noted that in accordance with the positive scenario of “we need to return to the previous level (value of shares) and look forward to continued growth.” “Adverse (outcome with Rosneft) is not under consideration,” added the AFC President.

AFC offered to resolve the dispute out of court

On June 22, the day of the annual meeting of shareholders of “Rosneft”, JSFC “Sistema” announced the offer in an extrajudicial procedure to evaluate the results of reorganization of “Bashneft” (controlled by Rosneft), as well as the financial implications of this restructuring for the oil company.

The main beneficiary of AFK “Sistema” Vladimir Yevtushenkov then said TASS that the company is ready to consider any variants of settlement of a dispute with Rosneft.

The head of “Rosneft” Igor Sechin did not comment on the offer AFK “System”, but said they need to check its legitimacy because earlier the court had received “some of the settlement proposal (the petition for waiver of a claim alleged on behalf of Rosneft with obvious signs of fake – approx. ed)”.

A detailed justification for the position of AFC

AFC has previously submitted its detailed position on this matter. Shamolin as arguments for his position reminded a few moments. According to him, the repayment of shares of “Bashneft” is not against the law. “Did the same, the Agency that when redeemed shares. Why do we have to recognize it and pay for it some money?” he said.

Earlier in the AFC noted that the shares of “Bashneft” was transferred to the company in accordance with the separation balance sheet at their market value and in full compliance with a specific gravity of all assets that is the global corporate practice. In addition, according to the AFC, the shares of “Bashneft” has been bought out minority shareholders in strict accordance with the law “On joint stock companies” and this redemption is the responsibility of the companies. Also AFK “System” has stressed that the repayment of shares of “Bashneft” is not contrary to the interests of the company, which reduces dividend payments on redeemable shares and reserves the right to re-issue securities, which allows the company to attract funds from the award to increase the market value of the shares.

Initially, the amount of the claim of “Rosneft” in the case amounted to 106,6 billion roubles, but then it was increased to is 170.6 billion. “Rosneft” has justified it by the fact that “our business largely depends on the dollar”, so the amount of losses are translated into us dollars at the exchange rate at the date of determination of the amount of damages. AFC disagreed, calling such arguments “nonsense”, as initially amount to more than 63 billion rubles has not appeared in the lawsuit, although the requirements have not changed.

Shamolin said that AFK “System” should not be responsible for changes in the exchange rate. “We must recognize that we are responsible for the change rate of the ruble? But we can’t admit it. Then all the citizens of the Russian Federation should come to the Central Bank of the Russian Federation and to demand to compensate them for the devaluation of the national currency, but also no one does”, – said the President of the AFC.

According to Shamolin, all the facts in relation to the restructuring of “Bashneft” was known and did not cause any issues. “We owned the company, we conducted a restructuring, this restructuring was known to all: it was published in the media, voted for it shareholders. It is no secret, has not been opened action that was not previously known,” he concluded. According to him, in this case, the question shall be put “not any violations identified and the actions that have always been considered legitimate and normal,” – said Shamolin.

The lawsuit to recover from Sistema and ZAO “Sistema-invest” 106,6 billion roubles of the losses caused by “Bashneft” as a result of its reorganization in 2014, was submitted in early may. Later, the amount of claims increased to 170,6 billion. Consideration of the claim of “Rosneft” and affiliated “Bashneft”, later joined by the government of Bashkortostan, is scheduled for June 27.

Bashneft from 2005 to 2014 he was part of the AFK “System” Vladimir Yevtushenkov, after it was returned to public ownership. In 2016 50,1% of shares of “Bashneft” bought “Rosneft”, paying for a package of 329.7 billion. Later, after the offer to minority shareholders, “Rosneft” began to control 57.7% of the share capital of “Bashneft”. Bashkiria owns 25% plus one share in Bashneft.