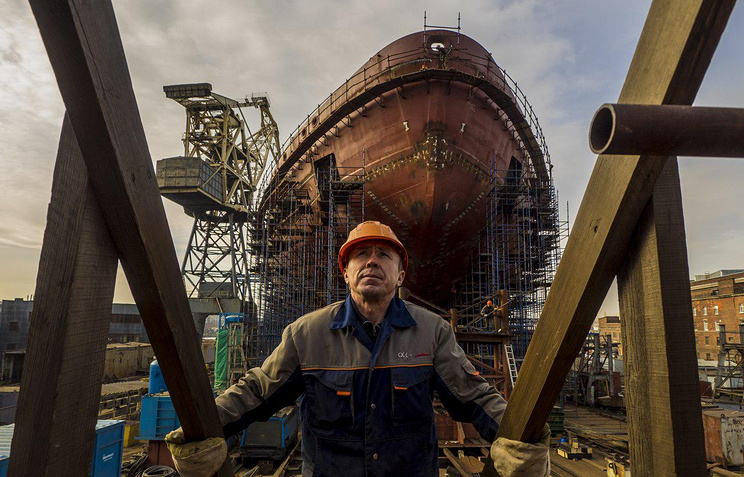 SAINT PETERSBURG, June 29. /TASS/. Russia has the resources to create a strong icebreaker fleet, which will be necessary in relation to the growth of freight traffic in the Arctic, but the construction of new vessels for the Arctic must be conducted not only at the expense of the state. This opinion was expressed to experts interviewed by TASS.

In their opinion, this area should develop with private investment. They also believe that it is necessary to consolidate the management of nuclear and non-nuclear icebreaking fleet and to increase the requirements for ice class cargo ships.

“Today the Arctic region is entering an era of industrial development directly associated with the development of the natural potential of the new territories and water areas, primarily oil and gas resources,” said TASS academician of RANS, member of the scientific Council at the RF security Council and working groups on “Socio-economic development and Ensuring environmental safety and rational use of natural resources” of the state Commission on development in the Arctic Mikhail Grigoriev.

At the same time, he noted that this work is not from scratch. “This revival of a systematic exploration started in the last century, the results of which are the Kola mining-industrial complex in the Norilsk industrial district, oil and gas complex of the Yamalo-Nenets and Nenets Autonomous districts, and many other objects from the Kola Peninsula in the West to Chukotka in the East. Currently, the Arctic region provides 85% gas, 11% oil, 95% of Nickel and cobalt, 100% of Apatite concentrate, and many other minerals,” – said the expert.

He pointed to the fact that the main traffic in the Arctic is linked to the export of products and we are talking about tens of millions of tons. “If we want to provide year-round navigation in the water area of the Northern sea route, we must build more icebreakers, but a sufficient number of cargo ships with a high ice class, preferably of the ice class Arc 7,” – said Grigoriev.

Vice-Chairman of the Kola science centre of RAS, doctor of technical Sciences, Vladimir Masloboev connects prospects for the development of transportation with the implementation of projects for liquefied natural gas.

He believes that a special role in the near future is going to play the “Eastern vector of development of the Northern sea route from Sabetta to plentywood and then to Asia.” According to Masloboev, “all this is due to LNG”. “In order to have development there, it is necessary to double the number of nuclear-powered icebreakers, the more that they [the current] approach to the end of the warranty period”, – said the expert of the Kola science centre.

He also considers it fair to impose part of the costs for the construction of icebreakers at companies operating in the Arctic region. “Nuclear fleet may not be private but public, everybody understands that. But we need our uglevodorodov the company is also involved”, – said Masloboev.

The development of year-round traffic volumes in the Western sector of the Northern sea route, according to Grigoriev, “requires the expansion of the group of ice-breakers due to additional [in addition to the three under construction] construction of two-sedimentary nuclear icebreakers type “Arktika” for maintaining the number of functioning courts at the level not less than six after 2022″. He noted that “it is necessary also to take into account the possibility of using diesel-electric icebreakers in the less difficult ice conditions”.

The three operating Russian nuclear submarines by 2020, over time of operation. They must be replaced with a three icebreaker: the lead ship “Arctic”, as well as two serial “Siberia” and “Ural”. They are built at the Baltic shipyard in St. Petersburg (Baltiysky Zavod – shipbuilding, enters in OSK) by order of Rosatomflot (part of Rosatom). The cost of this project is estimated at 122 billion rubles.

Nuclear icebreaker fleet has a wide range of functions. In addition to providing development projects of mineral resources, it support Northern delivery, cabotage and transit traffic, the solution of problems of national security.

Shipbuilding is ready to fulfill the order

Power of the icebreaker project 10510 “Leader” (120 MW) is almost twice will exceed the current generation of nuclear icebreakers (the capacity of the largest for today of the icebreaker, which is building the Baltic plant is 60 MW approx. TASS), on the physical parameters it will be three times as wide, allowing through the ice ships with a larger capacity. According to representatives of the Ministry of economic development, the creation of such an icebreaker could cost about 70 billion rubles.

As noted Rogozin at a meeting with Medvedev on June 19, the shipbuilders, the state Corporation “Rosatom” and providers are “optimistic about the atomic icebreaker “Leader” of 120 MW.” Vice Prime Minister noted that the establishment of the icebreaker “Leader” could provide the all-season and all-weather work in the Northern sea route as the West route and the East, for year-round export of hydrocarbons.

“Project “Leader” who will have a width of about 50 meters, can provide economic commercial speed in any ice that is in the Arctic. They will solve a problem year-round transit navigation along the entire Northern sea route and ensure the removal of gas and gas condensate to Southeast Asia, the Pacific region,” said TASS Director of shipping “Atomflot” Andrey Smirnov. However, he noted that “one icebreaker will not solve the problems – need series”. “According to specialists, such breakers must be at least three. But the question is where to find 240 billion to build them,” – said Smirnov.

Smirnov said that the creation of nuclear-powered icebreakers of the new generation “Leader” with a capacity of 120 MW are considered options for attracting private investment. “Investment option possible, probably, we will come to that. Still nuclear submarines were built by the state. But in the world practice of operating private companies is under the control of the state is quite real”, – says Director of shipping “Atomflot”.

He also did not exclude that in the future we can go on foreign participation in the construction of nuclear icebreakers. “Consumers of hydrocarbon products, which we will supply will be a developed country, and China, and Japan, and Korea”, – said Smirnov.

Can a business build nuclear submarines

According to Grigoriev, the development of new projects that involve a significant increase in cargo base and increase year-round traffic in the Arctic waters require that the business, when planning their investments in the development of projects on development of mineral resources of the Arctic zone of the Russian Federation to take into account all the complex and considered icebreaking support as an integral part of the future transportation system of the project.

“When planning its transportation system, the investor needs to think concerning the cargo ships, which should not require “maternity care” from the breakers” – said the expert.

He explained that the cargo ship highest ice class can easily rip on the move almost six-foot ice provided that it is smooth. He needs the help of icebreakers only in those cases when the Arctic by winds is in the grip of ice and the formation of hummocks with a capacity of up to 6-8 meters. This obstacle can pass only icebreaker, capable of going as smooth move, and “raids” by rolling over on the ice barrier and storming the congestion.

Now, according to Grigorieva, the Russian Arctic, few cargo ships with a high ice class, which are used for export of hydrocarbons and ore concentrate, and the court of a lower ice class icebreakers require constant maintenance.

For example, one of the companies is going to transport coal in the Kara sea on bulk carriers class Arc4, which need to be accompanied by two icebreakers.

“In our view, planning for the use of cargo vessels of low ice class Arc4, requires continuous icebreaker escort during the winter-spring navigation in the water area of the Northern sea route, for example, to export large amounts of coal Western Taimyr, can lead to unnecessary diversion of forces of the icebreaker fleet and the collapse of the Arctic transport system because it will require the colossal number of flights and can pull up all of the icebreaking forces in this area”, – said Grigoriev.

In addition to the construction of new icebreakers, government and business, according to Grigorieva, must work together to solve one more not less important task.

“Consolidation of the management of the icebreaker fleet, owned by the Russian Federation, in the same hands. There are problems that can not solve a heavy-duty icebreakers (nuclear) Rosatomflot and less powerful rosmorporta and so on. The problem is that it is necessary to consolidate the management planning of ice operations in the same hands. No one encroaches on the vessels belonging to the different structures, but we need unified management to effectively coordinate their work”.

Grigoriev believes that when planning icebreaker support in the waters of the Northern sea route and the Northern Maritime corridor as a whole should provide a single integrated approach to management, taking into account ice-breaking power Rosatomflot, Rosmorport, Marsaskala, transport and mining companies in Russia and the possibility of attracting foreign icebreakers, primarily within the required extension of the intergovernmental agreement of Russia and Finland “On cooperation and interaction in the provision of icebreaking posting of courts in the Baltic sea”.