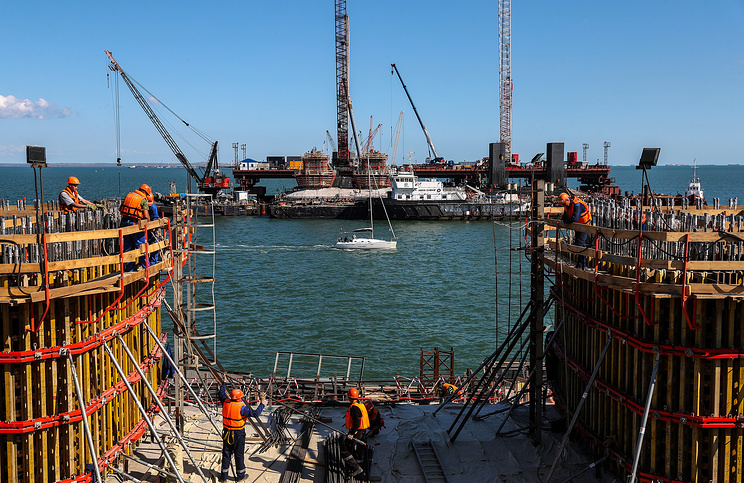 ALUSHTA, June 29. /TASS/. The construction of a road and rail bridge, which will connect Crimea with mainland Russia, has reached its peak capacity. On Thursday reported, Roman Novikov, head of Federal state institution “Management of Federal highways “Taman” (uprdor “Taman”), which acts as the customer of the project.

“The construction has reached its peak capacity. Involved about 1,5 thousand various means, including more than 100 cranes of different capacities. At the facility employs more than 8 thousand, and 1.5 thousand technical workers. Crimean bridge, by the way, building nearly 600 Crimean – one of the highest rates given the fact that the project involves residents from different regions of Russia,” – said Novikov, speaking on the Crimean transport forum, which opened in Alushta on Thursday.

He recalled that in General, today the construction of the bridge has stepped over its equator: made almost 55% of the total work. In particular, said Novikov, the basic design of the automobile part of the bridge ready at 70%. “If we talk about the road part, then the average implementation can be estimated at 70% Stress, 70% – it is the willingness of major structural elements (road parts – approx. TASS). Prior to the opening of traffic on the bridge in December 2018, work remains to be done,” said Novikov.

He also reported that the pile foundations of road poles are 98% ready. “Transient structures – about 60% of the project installed, the slab is almost 40%,” – said Novikov.

Now the builders are prepared to start work on forming the road surface. According to the head of roads administration “Taman” approved “recipes of asphalt mixtures”.

The construction of the bridge

Russia started work on the construction of the Kerch bridge in February 2016. The total cost of the project is 228 billion rubles. The Kerch bridge is being built at the expense of the Federal budget in the framework of the Federal target program “Socially-economic development of the Republic of Crimea and city of Sevastopol until 2020” without Fund-raising.

Novikov noted that the construction is in accordance with the approved schedule. Car traffic on the Crimean bridge is scheduled to open in December 2018-trains – in December 2019.