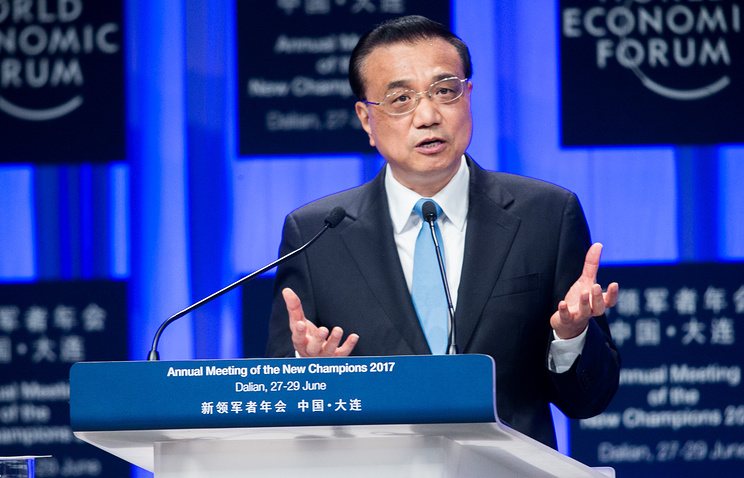 In the Chinese city of Dalian has completed its work the forum “Annual meeting of the new Champions”, which is often called the “Summer Davos”. This event, held since 2007, organizes the same team, and the world economic forum in Davos, Switzerland. The difference between the two events is that the Chinese are paying more attention to new technologies and fast growing sectors of the economy.

This year the main topic of the forum in Dalian was the Fourth industrial revolution and its impact on processes in industry, business and politics.

The Prime Minister of China Li Keqiang at the forum said that the government welcomes participation of foreign enterprises in the Chinese “Internet plus” and promised to expand the openness of this project. This concept involves the introduction of the industrial Internet (the ability of machines and devices to communicate without human intervention and analyze “big data”). According to the authors of the concept, “Internet plus” will provide additional impetus for the development of electronic Commerce, will help create a “smart” factory and increase the presence of Internet companies of China in the international market.

“Foreign investors there is a huge space for development in the Chinese sphere of “Internet plus”, including cloud platforms, telecommunications and cross-border e-Commerce,” quoted Li Keqiang edition of the “Xinhua”.

The Prime Minister noted that the government of China can provide “moderate” supervision and regulation to develop both Chinese and foreign companies with new technologies.

The credibility of artificial intelligence

One of the main themes of the “Summer Davos” — artificial intelligence. Experts said the new technology will significantly improve the economic situation in individual countries and around the world. Thanks to artificial intelligence, in 2030, world GDP will grow by 14%, or $15.7 trillion. This happens due to a substantial increase in labor productivity.

All this will be possible if humanity will cease to fear artificial intelligence. “It’s not something to be afraid of. This is our creation and something we should study and understand. To become the builders, not the victims,” he said at the forum the Director of the company Infosys Vishal Sikka. Agrees with him President of Chinese Internet giant Baidu Zhang Ya-Qin: “Artificial intelligence will complement us, not replace”.

At the same time, the development of artificial intelligence is not possible without a fundamentally new type of legal regulation.

Another topic about which much was said at the “Summer Davos,” the sharing economy. This is a business that allows people to effectively use the extra resources with the help of digital platforms. A vivid example is Airbnb, which allows you to take the spare room in the apartment to travelers.

Companies operating in this segment, even ten years ago were on the periphery and now actively affect the development of various industries — from tourism to transport. The forum noted the rapid growth of such companies. For example, it took Hilton 93 years to build 600 thousand hotel rooms. Airbnb was able to reach the level of just four years.

In China, the sharing economy is growing rapidly. In 2015, its volume amounted to $229 billion, and according to forecasts it will increase by 40% every year for the next five years. By 2020, the turnover share of the economy will account for 10% of China’s GDP. Increasing the number of clients: in 2015, the share of services companies have benefited 100 million Chinese and visitors to the country, and in 2016 — already 600 million.

A successful example is a service for finding travel companions Didi Chuxing. In 2015, it was used over a million times a day. For the year this resulted in a saving of 510 million liters of fuel and avoid emissions of 13.5 million tonnes of carbon dioxide. In August last year, the company acquired the Uber.

An example of rapid application of the sharing economy is the variety of services short-term lease. If in Russia they only appear while focused only on drivers (e.g., Moscow and St Petersburg the services of car sharing), in China you can rent bicycles, mopeds, umbrellas, basketballs, and even mixers. One of the most popular services is short-term hire of portable chargers for smartphones.

This type of economy many advantages both for customers and for business and government. For example, a research center of the world economic forum found that using Airbnb for the Olympics in Rio is so many fans that they would have to build 257 hotels. Thus, the application helped to save a lot of money for the construction of hotels.

However, the forum sounded and criticism of this type of activity — a number of experts believes that the sharing economy reduces a lot of jobs and pushes up rents.

To deal with the Forex with the help of Russia

The forum is the Chinese have not only shared their experience and showed interest to others. “The Chinese understand that they need to build experience in the field of industrial safety at the expense of cooperation with Russia. We have an understanding of how in this case to provide. Coming to us more and more delegations from China, with China is commercial cooperation, offers Chinese customers”, — told TASS the Vice-President “” Kaspersky Lab, Anton Shingarev.

He noted that cooperation between the two countries will help to fight viruses like Petya. He said that China is ready to invest heavily in cybersecurity. In turn, Russia has experience and valuable knowledge, allowing to successfully deal with the network criminals.