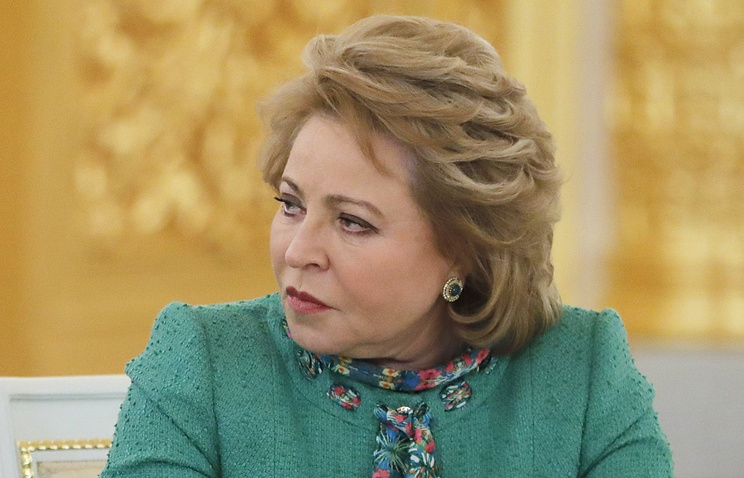 NOVOSIBIRSK, July 3. /TASS/. Russia counts on making adequate decisions regarding their powers in the parliamentary Assembly of the Council of Europe (PACE) and insists on changing the procedural rules of the Assembly, which would not be allowed to continue to deny the authority of the national delegation.

This was stated to journalists the Chairman of the Federation Council Valentina Matvienko.

She stressed that Russia’s decision to suspend the payment of Russia’s contribution to the Council of Europe (CE) in 2017 was “absolutely right”.

“It is a signal in General, the Council of Europe, not only the PACE that the situation in this organization continues to degrade. Persecuted members of national delegations, there is no free discussion areas, Russophobic lobby is trying to control the PACE, as evidenced by the attempt to release from his post of PACE President Mr. [Pedro] Agramunt” – said Matvienko.

However, she pointed out that the case was “not in the powers of the Russian delegation in principle that nobody has the right to limit the powers of any national delegation, because the deputies are elected by the citizens of their country, are delegated in PACE”. In this regard, said the speaker of the Federation Council, must be “mandatory regulation change of PACE, which did not allow anyone to restrict the rights of the national delegations”.

“While the regulations do not change, today will be one delegation to prosecute for political reasons, tomorrow – another, it is absolutely an abnormal condition,” she said.

Matvienko also noted that the PACE approves of the governing bodies of the Council of Europe Secretary-General, judges. “If one of the national delegations is not involved and does not vote, then strictly speaking, the legitimacy of these people, at least for Russia, it is doubtful the Council of Europe can’t work as an equal platform for all COE member countries”, – said the MP.

According to her, the current situation is “seriously concerned”, the Committee of Ministers of the Council of Europe.

“They understand the abnormality of this situation, and we hope that some adequate action will be taken”, – said the speaker of the Federation Council. She did not rule out, however, that can be taken new decisions on contribution of the Russian Federation with Council of Europe, if by 2018 will not be taken “adequate procedural decision” that would allow the Russian delegation to participate fully in the work of PACE.

“On what basis do we have to pay money? So for the money every day we watched Russophobic hysteria? No, this is wrong, incorrect,” – said Matvienko. “Therefore, we expect that will be taken adequate measures in this regard”, – concluded the Chairman of the upper house of the Russian Parliament.

She added that the question of the contribution of the Russian Federation in the Council of Europe in 2018 will depend on developments. “What will happen next year – let’s see how events will develop”, – said Matvienko.

Contribution to the Council of Europe

In early June, the speaker of the state Duma Vyacheslav Volodin has informed journalists that the Russian Federation has blocked in the current year the payment of one third of its contribution to the CE, which could go to Fund the PACE. According to him, it is about the amount of about €11 million.

The Russian delegation in PACE in April 2014 was deprived of powers due to the events in Ukraine and the reunification of the Crimea with Russia. In 2015, the PACE has twice considered the question of the restoration of the Russian delegation of its rights, but the sanctions remained in force: Russia deprived of voting rights and participation in decision-making bodies of the Assembly and its monitoring missions to observe elections in the space of the COE. In response, Russia said it would suspend its involvement in PACE activity until the end of 2015. In January 2016, the Russian delegation refused to apply for credentials for 2016.

Currently, the PACE discussed the issue of the resignation of its Chairman Pedro Agramunt after a joint with Russian parliamentarians trip to Syria, where, in particular, he met with President Bashar al-Assad. For it Agramunt was subjected to the sharpest criticism by a number of fellow parliamentarians, who demanded his resignation from the post of speaker. The deputies approved a resolution which aimed at creating in the regulation of the PACE mechanism for the removal of its leaders from office. Earlier also it became known that Agramunt was from the faction of the European people’s party.