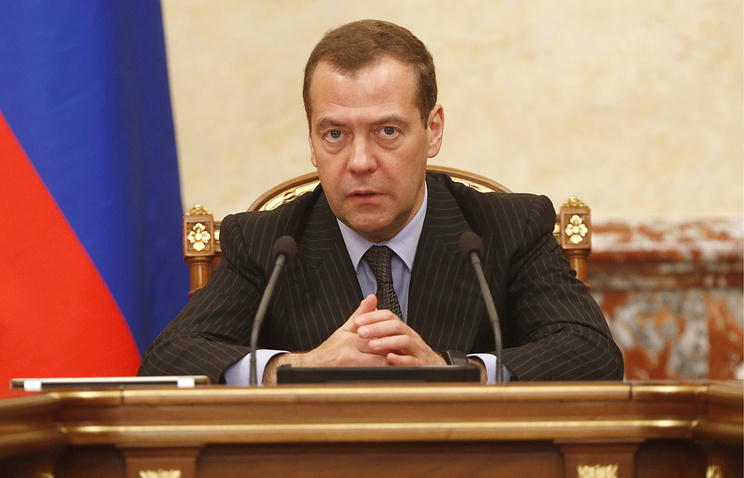 MOSCOW, July 4. /TASS/. The Chairman of the government of the Russian Federation, the Chairman of the party “United Russia” Dmitry Medvedev will meet on Tuesday, July 4, participation in the work of the party Committee for control over implementation of the election program of “United Russia” on the theme “the quality of the state: efficiency of power and people’s control”.

In the work of the Commission will be attended by the Minister of justice Alexander Konovalov, Minister of construction and housing and utilities Mikhail Men, Minister of Finance Anton Siluanov, Minister of labour and social protection Maxim Topilin, Minister for Open government Mikhail Abyzov, state Duma deputies, representatives of the Higher school of Economics.

In particular, we will focus on the availability and quality of public services, combating corruption and protection of public interests, as well as the development of entrepreneurship and transparency of public procurement.

As noted the Vice-speaker of the state Duma, Secretary of General Council of “United Russia” Sergei Neverov, quoted by the press service of United Russia, the party pays close attention to his campaign promises. He noted that besides the involvement of the expert community, which allows you to get an independent assessment, the party is “in constant communication with the citizens.”

“The admissions Chairman of the party, party forums, and most importantly – personal meetings and communication are the most effective feedback mechanism, which allows you to make the necessary current changes, and gives opportunity to understand how a particular decision will be implemented in the regions”, – said Neverov.

He added that the formation of the program through open discussion with voters during early voting, the results of which formed the list of candidates of the party, increases their performance and is a tool of direct democracy.

“It is people who determine who the party should nominate as candidates for election, and which program will be implemented. While only the “United Russia” introduced a mandatory requirement for candidates: the absence of any criminal record”, – underlined Neverov.

The execution of program commitments

For its part the Vice speaker of the state Duma Irina Yarovaya said that the first “reconciliation of hours” party held at the XVI Congress (held in late January 2017 approx. TASS), where “confirmed the fulfillment of some commitments and said the timing of any further decisions”.

“We are now at the level of Chairman of the party will be together with experts to discuss the quality of implementation of the programme of commitments on the subject, which directly affects the efficiency of the public administration and depends on the trust of citizens of Russia”, – said Yarovaya.

She noted that “the results achieved in less than a year, very convincing.”

“We are ready to offer new ideas and solutions”, – noted Vice-the speaker.

Preliminary results of implementation of the election program of “United Russia” in 2016 was announced at the party Congress on 21 and 22 January 2017 in Moscow. The previous meeting of the Commission for monitoring the implementation of the election program of the party on “Social policy: investment in each person is the basis of a common future” was held in the headquarters of the party on may 10.