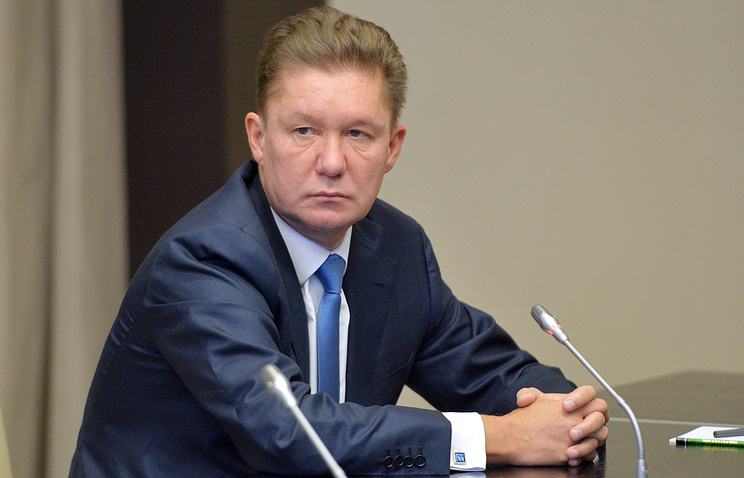 “The agreement between Gazprom and our Chinese partner CNPC on the date of commencement of gas supplies through the pipeline “Power of Siberia” is 20 Dec 2019″, – he said.

According to the head of “Gazprom”, “achieved a very important agreement, because in fact, the project “Power of Siberia” and the start of gas supplies to China moving into its final, crucial stage”. Gazprom and our Chinese partners, is implementing a project on schedule, even ahead of schedule, this concerns the construction and the linear part of the pipeline, and concerns about the development of the Chayanda field,” said Miller. “There is no doubt that, on 20 December 2019 will begin deliveries of Russian gas to China,” he said.
According to him, to 2019, respectively, will be completed the remaining part of the pipeline – 2 156 thousand km.

Currently, Gazprom is building the pipeline “Power of Siberia”, by which gas from Eastern Siberian fields (Chayandinskoye in Yakutia and the Kovykta in the Irkutsk region) will be transported in the domestic market and for export to China. The project of gas supplies to Eastern regions of China is also called “Eastern route”.

Miller added that Russia and China have determined the volumes and terms of realization of the project on Russian gas deliveries from the Far East to China.

According to the Miller, “the Chinese market is extremely capacious, 12 percent growth in the first four months of 2017, it is really a very impressive pace.” “Given the fact that gas consumption in 2016 has exceeded the psychologically important bar of 200 billion cubic meters, we can absolutely precisely say that over the next few years, the level of gas consumption in China will reach 300 billion cubic meters,” – said the head of “Gazprom”.

According to him, “then it goes and now comes to new contracts for the supply of Russian gas to China”.

Miller refused to call the volume of Russian gas supplies to China from the Far East, offering to wait for the signing of the basic conditions of supply. “Today it is absolutely specific figures identified in the framework of negotiations,” however, he assured. Miller added that the “Power of Siberia” will be a defining volume for gas supplies to China.

The head of “Gazprom” reported that at the moment, “completed construction of 800 kilometers of the pipeline “Power of Siberia”, welded into a thread of 1050 kilometers. “Until 2019, the remaining volume of 2156 miles build,” he said. Miller added that the project also includes construction of seven compressor stations is envisaged also for the development of Kovykta field.

According to the contract, signed 21 may 2014 between Gazprom and CNPC on Eastern route will be the supply of 38 billion cubic meters of gas a year for 30 years. The contract is worth 400 billion dollars. The terms of partnership in the design, construction and operation of the transboundary zones of the pipeline is defined by the intergovernmental agreement of October 13, 2014

In 2015, Gazprom and CNPC signed an agreement on the basic conditions of pipeline deliveries of gas from fields in Western Siberia to China via the Western route (gas pipeline “Power of Siberia – 2”).

Initially provides for the supply to China of 30 billion cubic meters of gas per year. Also, in 2015, Gazprom and CNPC signed a Memorandum of understanding on the project for pipeline gas supply to China from Russia’s Far East.