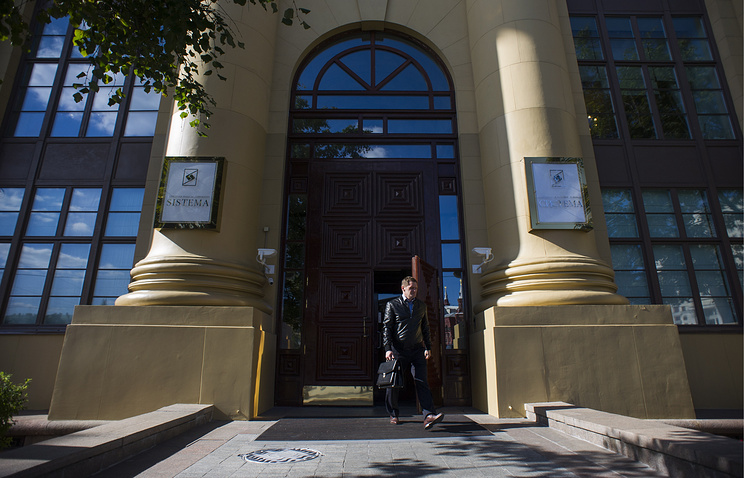 MOSCOW, July 4. /TASS/. AFK “System” asks the Prosecutor General to check the legality of the ban on the receipt of dividends of subsidiaries whose shares had been arrested in the case with Rosneft. This was reported by TASS, the official representative of AFK Sergey Kopytov.

At the request of “Rosneft” the court arrested the assets of AFK “System” – 31,76% of the telecommunications company MTS, 100% of the network of clinics “Medsi” and 90,47% of Bashkir power grid company (BESK).

“We appealed to the Prosecutor General, the Prosecutor of the city of Moscow, Russia’s Minister of justice and chief bailiff of Russia with the request to inspect legality of actions of a bailiff Olga Steel, which exceeded his powers, banning to the income of the court arrested shares. The bailiff self-imposed additional security measures not covered by the court,” he said.

In addition, the “System” asked to take control of the cancellation decision and the bailiff to bring the perpetrators to justice, said Kopytov.

According to the representative of the AFC, in this situation we are actually talking about “Frank lawlessness.” “This act is the quintessence of the events that accompany the claim of “Rosneft” from the first days,” he said.

Previously, the AFC has filed a petition for annulment of interim measures in respect of the shares of MTS, a network of clinics, “meds” and Bashkir power grid company (BESK). The assets seized under the claim “Rosneft” to recover from “System” and “System-invest” is 170.6 billion rubles of losses caused, in the opinion of the oil company “Bashneft” during the reorganization in 2014, the AFC considers unreasonable the arrest, because the value of the “System” more than 6.5 times the amount of the claim. “System” has filed an appeal against the seizure of assets.

The resolution bailiff also restricts the right of AFK and “System-invest” to receive income on the arrested securities. According to the AFC, this was done “contrary to the judicial act.”

Shareholders of MTS (the biggest asset of “the System”) at the annual General meeting on June 29 approved the dividend for 2016 in the amount of 31.2 billion rubles, of which the share of arrestees stake accounts for approximately 9.9 billion RUB.

Dispute “Rosneft” with the AFC

In early may, “Rosneft” and affiliated “Bashneft” has submitted to Arbitration court of Bashkortostan claim to recover from Sistema and its subsidiary “Sistema – invest” 106,6 billion rubles of losses caused by “Bashneft” as a result of its reorganization in 2014, Subsequently the amount of the claims of the plaintiffs increased to 170,6 billion rubles taking into account exchange rate differences. The lawsuit was also joined by Bashkortostan, which owns 25% plus one share in Bashneft. AFK “System” does not agree with these claims and considers them unfounded.

June 22 “the System” suggested “Rosneft” to settle the dispute out of court, however, in “Rosneft” considered that the specific proposals in the letter of the “System” no. The oil company intends to continue the trial.