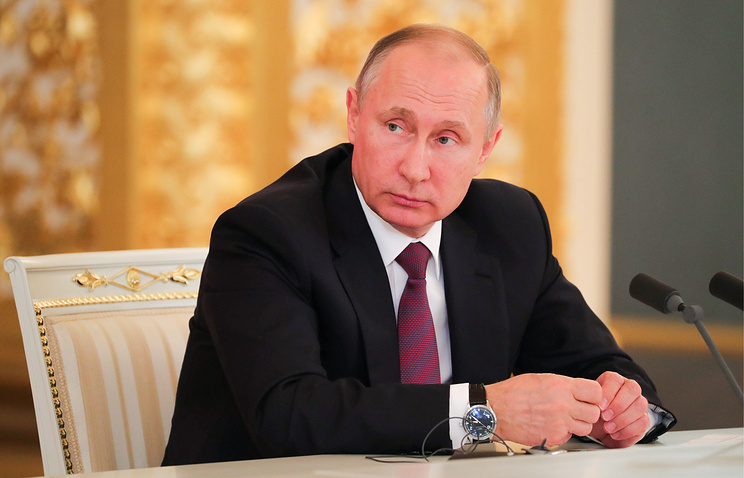 NOVO-OGARYOVO, July 5. /TASS/. The emergence of digital economy is a matter of national security of the Russian Federation.

The President of the Russian Federation Vladimir Putin said at a meeting of the Council for strategic development and priority projects.

“The digital economy is not a separate industry, in fact it is a way of life, a new basis for the development of the system of state management, economy, business, social sphere of society, he said. – Formation of a digital economy is a matter of national security and independence of Russia, the competition of domestic companies.”

The head of state reminded that in close contact with the business and expert community, the government has prepared a program for the development of the digital economy that will last for decades. Putin stressed that in recent years Russia has considerably advanced in many areas of digital development. According to him, the dynamics of the spread of broadband access and wireless networks of the Russian Federation is at the level of leading countries. He cited statistics of Rosstat, according to which from 2010 to 2016 the number of households with Internet access rose from 48.4% to 74.8%. While the average Internet speed in Russia in 2016 increased by 29%, which is comparable with France and Italy.

To determine the amount of funds

Putin compared the challenge of developing the digital economy of the Russian Federation with the electrification of the country in the XX century. In his opinion, the development of the digital economy – unprecedented in its scope and influence of the project. “It is really a breakthrough compared with those transformations at different historical stages allowed Russia to make a serious step forward to strengthen its position in the world. In the construction of Railways in the late nineteenth century or the electrification of the country the first half of the XX century”, – said Putin.

According to him, also need to “clearly define the sources, mechanisms and volumes of financing of programs of development of the digital economy”.

Putin also mentioned the creation of infrastructure for the implementation of innovative solutions, where Moscow is in second place in the world. To create new business models based on mass adoption of advanced technologies, the Russian capital in third place. “Sergei Semenovich (Sobyanin) will tell you how he achieved those results, but it does mean that we have competence, have the opportunity to develop other areas in the same way”, – Putin said, noting that everyone understands that Moscow, in comparison with other cities of the country, still has a number of advantages.

The President also noted that by early 2017 the Russian market of the commercial centers of data storage and processing have risen to 14.5 billion rubles. Due to the high level of competence of Russian IT-specialists of the Russian Federation offer a unique software solution that are used including the creation of the “smart cities”.

To use all the resources

Putin urged to use all existing Russian resources in order to make a breakthrough in the development of the digital economy.

“One of our colleagues in one of the Arab countries, the former oil Minister, once said: “the Stone age did not end because the stones ran out, but because there is a new technology.” They appear in the world and those who come late in this competition, instantly, anyway, very quickly, fall into complete dependence on the leaders of this process, the President said. – Russia can not in any case allow this to happen and, importantly, that we have all the chances, all the possibilities, using those factors that I mentioned. You need to use in order to provide this breakthrough, this breakthrough in the future”.

The Russian leader has noticed that, perhaps among the Russians there are those who asks the question: “Why do we need transition to a digital economy, because we have everything: we have oil, gas, coal, metals, and a variety, black and colored, and gold, platinum, and diamonds?”.

The President also added that in General, technological development is also good, has a good intellectual base, “but we need you leap, here’s what you need, and you need to provide it”, – concluded the head of state.
Putin proposed a plan for the development of the digital economy proposed by the government, with consideration made during the meeting of the Council for strategic development and priority projects proposals and amendments.