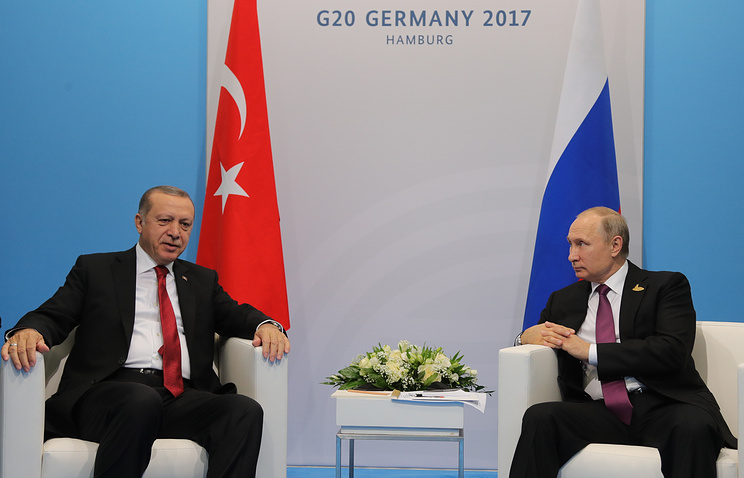 HAMBURG, July 8. /TASS/. Russian President Vladimir Putin said that the Syrian resolution in the struggle with terrorists in this country there is a serious promotion, including, thanks to the efforts of the Turkish leadership.

At the meeting with his Turkish counterpart Recep Tayyip Erdogan on the sidelines of the group of twenty summit, the Russian leader said that “in recent years, much has been done for full-scale development of bilateral relations and in addressing a number of issues that are of interest to us”. “Largely thanks to your position, Mr. President, managed to best change the situation in Syria: terrorist groups and the impact caused during this time and settlement progressed seriously” – appealed to Putin to Erdogan.

“We appreciate your position and the position of all your colleagues, our partners in the negotiation process”, – concluded the President of the Russian Federation.

Putin offered to speak at the meeting the entire range of Russian-Turkish relations.

The example of Moscow and Ankara

In turn, the President of Turkey expressed the view that the joint efforts of Moscow and Ankara “are a clear example for the peoples of the region and all countries in the world community.” “Expectations are really very high,” – said Erdogan.

He also noted that a very large contribution is made to the development of bilateral relations between Russia and Turkey.

The Turkish President expressed his confidence that their meeting with Putin at the summit of “twenty” is very important. “From myself personally and from the people I want to thank You for the role that You have shown (in the Syrian settlement),” asked Erdogan to Putin.

Meeting on “Russian territory” in Hamburg

A bilateral meeting was held in the premises of the exhibition centre reserved for the Russian delegation. The Russian President arrived in advance and about a 15 minute expected his Turkish counterpart.

From the Russian side in the talks attended by the Minister of foreign Affairs Sergey Lavrov, Deputy head of the Kremlin administration – press Secretary of the President Dmitry Peskov, the assistant to the President Yuri Ushakov, head of energy and the Ministry Alexander Novak and Maxim Oreshkin. In the composition of the Turkish delegation at the meeting, Deputy Prime Minister Mehmet Simsek, the Minister of foreign Affairs Mevlut Cavusoglu, a number of Ministers and other senior officials, including the head of National intelligence organization Hakan Fidan.