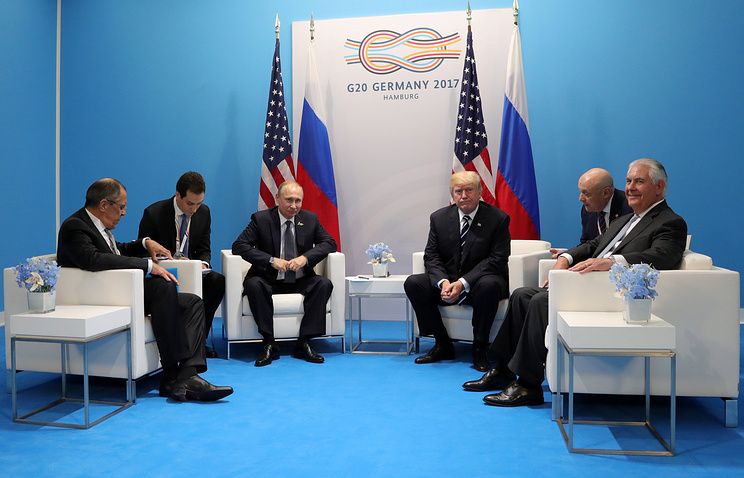 HAMBURG, July 7. /TASS/. The U.S. and Russia have agreed to cease fire in the South of Syria between 12:00 Damascus time on July 9. This was stated by Minister of foreign Affairs of Russia Sergey Lavrov following the meeting of presidents of Russia and USA Vladimir Putin and Donald trump.

“Agreed on some specific things. First – just today (July 7) in the Jordanian capital concluded the work of experts of Russia, USA and Jordan, they agreed on a Memorandum on the establishment of a zone of de-escalation in the South-West of Syria, areas, Deraa, Quneitra, and Suwayda, – said Lavrov. In the area to enforce the ceasefire from 12:00 Damascus time on 9 July.”

“The U.S. and Russia have pledged to enforce the cease fire by all factions that are there, to ensure humanitarian access and to establish contacts there are between the opposition and the monitoring center, which is created in the Jordanian capital, he continued. – At first, the security around this area will be provided with the use of forces and means of the Russian military police, in coordination with the United States and Jordan.”

According to the Minister, in the Memorandum, “clearly reaffirmed the commitment of Russia, the USA and Jordan to the sovereignty, territorial integrity of Syria and UN security Council resolutions, which laid the Foundation for the promotion of a political settlement”.

“In the Memorandum of may 4 (at the end of the international meeting in Astana – approx. TASS) in question from the four zones of de-escalation in Syria – the Northern region of Idlib, just North of HOMS, much of Eastern Guta and southwest Syria, Lavrov said. – It is clear that in the South-West without the Jordanians and Americans very hard about something to negotiate. In Astana it was about the three other zones.”

“There is an understanding of what will look like the area around HOMS and Eastern ghouta, – said the head of the foreign Ministry. For the Northern area (Idlib), the conversation continues.”