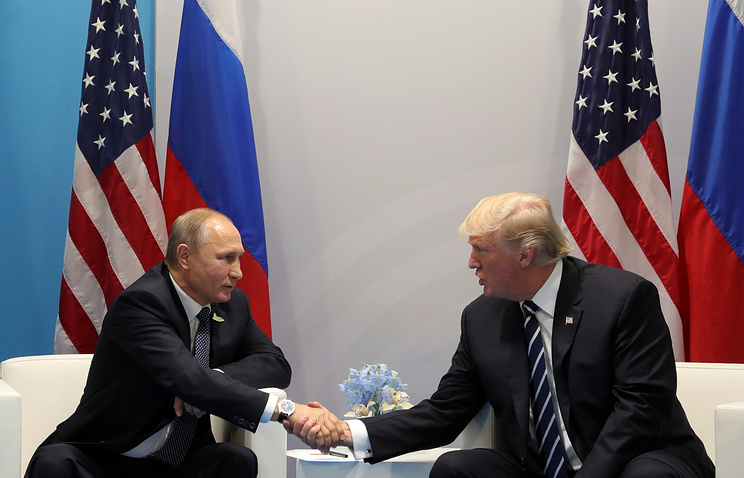 HAMBURG, July 8. /TASS/. On the first day of work at the G20 summit, Russian President Vladimir Putin participated in the opening session of the group of twenty, held on the sidelines of the meeting of BRICS leaders, and also held several bilateral meetings. The most expected was the meeting with the US President Donald trump, which lasted more than two hours.

The main meeting of the Russian and American leaders was preceded by a brief meeting “on his feet”. Trump first came to Putin before the informal meeting of the leaders at the summit of “twenty”. Video of the moment captured by the photographer of the German delegation, published in the social network, the official representative of the Cabinet of Germany Steffen Seibert.

The footage shows how the leaders in waiting will all gather for a meeting, talking in one of the halls of the Congress centre. Putin spoke with Japanese Prime Minister Shinzo Abe, when he was approached by trump. The President, turning to his American counterpart, shook his hand. The President of the USA second hand, as a friend, took Putin under his elbow.

As reported the press Secretary of the Russian President, Dmitry Peskov, during this brief communication Putin and trump confirmed that later today they will hold a separate meeting.

The main meeting of the presidents of Russia and the United States lasted much longer than planned: instead of the allotted thirty minutes to an hour, the leaders talked for 2 hours and 15 minutes.

Opening the talks, Putin stressed the importance of a personal meeting with the President of the United States. “Mr President, we spoke on the phone on very important issues on the bilateral agenda and the international agenda”, – he said to Trump. However, according to the Russian leader, “of course, this is not enough”. “If we want to solve the issues of bilateral relations and topical issues on the international agenda, of course, such meetings are necessary”, – said Putin.

Trump expressed confidence that his conversation with Putin “will be positive for both countries.” “We expect that will happen a lot of positive for Russia and for the United States, and for all concerned. I am honored to be here with You,” he said.

The meeting was attended by the Minister of foreign Affairs Sergey Lavrov and Secretary of state Rex Tillerson.

Later, at a meeting with Prime Minister Shinzo Abe Vladimir Putin said that he discussed with Donald trump the situation in Ukraine, Syria, combating terrorism, and cybersecurity.

“I had a very long conversation with the President of the United States. Have a lot of questions – there is Ukraine, Syria and other issues, some bilateral questions. We’re back to the fight against terrorism, cyber security,” Putin said.

The results of the talks between Putin and trump later in greater detail told to journalists the head of Russian foreign Ministry Sergei Lavrov. According to him, the meeting was very specific and showed interest in finding mutually beneficial agreements. “My feeling was confirmed that the presidents of Russia and the us – driven primarily by the interests of their countries and understand the interests, first and foremost is to seek mutually beneficial agreements, rather than trying to play a confrontational scenario, not trying to create problems out of the blue,” said the Minister.

As noted by Lavrov, the meeting of Putin and trump was constructive, was the focus of both presidents to promote national interests. “And it was also the understanding that each country could more effectively if we cooperate, to seek a balance of our interests and to achieve stabilization of the situation in various regions of the world,” – said the Minister of foreign Affairs of the Russian Federation.

“We are with [Secretary of state] Rex Tillerson is tasked to continue and intensify the cooperation of foreign ministries and directly, and in the UN security Council on all questions of the international agenda, including the Korean Peninsula”, said Lavrov.

In addition, the presidents agreed to create a bilateral working group on information security, Lavrov continued. “Agreed that all these issues holistically, including the fight against terrorism, organized crime, hacking in all its manifestations will be the subject of bilateral Russian-American cooperation,” he said, adding that the topic of cyber security was highlighted.

The head of Russian diplomacy also noted that the President of the United States heard statements from the Russian authorities on non-interference in elections, accepts them and believes that the campaign accused Russia of selling is a strange one. “President trump – I’m sure it will say either he or Rex Tillerson said that this campaign is already acquiring quite a strange character, because for many months, when these accusations are not presented a single fact that is recognized and those in Congress who led this movement at some stage, was called on the carpet”, – said Lavrov.

He also said that the meeting raised the topic of taken in US-Russian diplomatic property.

In turn, the U.S. Secretary of state in conversation with American journalists also spoke about the meeting between leaders of the two countries. He called the talks between Putin and trump very constructive. According to Tillerson, the two leaders quickly found common language and have reached a good understanding.

Trump and Putin discussed the issue of Syria, disputes over past problems the meeting was not long, said Tillerson. The US, according to him, based on the fact that the incumbent Syrian leader Bashar al-Assad has no long term future in the political life of their country, but how he would depart from the government is not yet defined. Tillerson also said that the details of the new agreement on security in Syria, is still produced by the United States, Russia and Jordan.

The meeting of the presidents of Russia and the United States was riveted General attention. So, German Chancellor Angela Merkel welcomed the establishment of personal contact between them. Answering the question as it relates to the fact that the American and Russian leaders held the first direct talks, Merkel said: “I welcome that trump and Putin met on the sidelines of the summit.”

As told journalists the Minister of foreign Affairs of the Russian Federation Sergey Lavrov following the meeting, Russia and the United States agreed to establish a zone of de-escalation in the South of Syria since July 9. The U.S. and Russia have pledged to enforce the cease fire by all factions that are there, to ensure humanitarian access and to establish contacts there are between the opposition and the monitoring center, which is created in the capital of Jordan. At first, the security around this area will be provided with the use of forces and means of the Russian military police, in coordination with the U.S. and Jordan, the Minister said.

Due to the fact that the interview with trump was delayed, the Russian President is planned later managed to start the meeting with the Prime Minister of Japan Shinzo Abe. Putin apologized to Abe for what he had to wait.

Japanese Prime Minister was sympathetic to the situation. “Really, I was looking forward to today’s meeting, but, on the other hand, I have repeatedly said that dealing with such issues as Ukraine, Syria, North Korea and other global issues require a meeting between the leaders of Russia and the United States,” said Abe at the meeting with Putin.

The Russian President expressed hope that intensive dialogue with Japan will help solve long-standing problems and will allow to develop bilateral relations. The Russian leader welcomed Abe call him “you”, and noticed that in the nearest future Vladivostok will host another meeting.

Abe stressed that Japan is ready to develop cooperation with Russia in the Kuril Islands to strengthen confidence between Moscow and Tokyo to sign a peace Treaty. He added that since the last meeting of the two leaders, the bilateral relations have been steadily developing in various fields, and today’s meeting will give an impetus to this development.

In addition to bilateral meetings Putin took part in the sessions of the summit. The result of one of them – on political issues – was a joint statement of leaders of “twenty” in the fight against terrorism. The document is not easy, consistent, however, in the end it managed to take, and as reported by Chancellor Merkel.

The leaders of the “twenty” also took part in a joint photo in the foyer of the Exhibition centre of Hamburg before the official opening of the summit. Putin and U.S. President took place in the first row. Trump is second from right in the centre of the mistress of the summit Merkel, on the left is from her Chinese President XI Jinping, Putin then left the Turkish President Recep Tayyip Erdogan.

As for the native “dvadcatogo”, that is the economic agenda, in this region the discussion was also fruitful. The G20 summit agreed in General with the need to abandon trade protectionism, said Sherpa of the Russian Federation in the G20 Svetlana Lukash. According to her, the task of the summit was to show that “this process can only be beneficial, it is still irreversible, the country will benefit from a joint cooperation.”

“Overall, it turned out. I think you’ll see it in the final communique,” – said the Russian G20 Sherpa. Assessment Lukash, in General, the summit in Hamburg is constructive without much confrontation.

“I did not notice that was a strong confrontation at the summit, she said. – The meeting was fairly constructive. I was even impressed by the speech of the President of the United States. He basically talked about the need to care about the environment and about clean energy”.

“At our level [of the countries] have much more detail and the difference is visible is much stronger,” she said.

At the G20 summit was held also the traditional meeting of the leaders of the BRICS countries [Brazil, Russia, India, China, South Africa]. According to the results of a communique to the press in which, in particular, contains an appeal to the international community to implement the Paris climate agreement. In addition, the BRICS leaders spoke against discrimination and protectionism in the world economy.

On Saturday the President of Russia will continue work in the framework of the summit of the group of 20. After its completion, Putin will leave Hamburg.