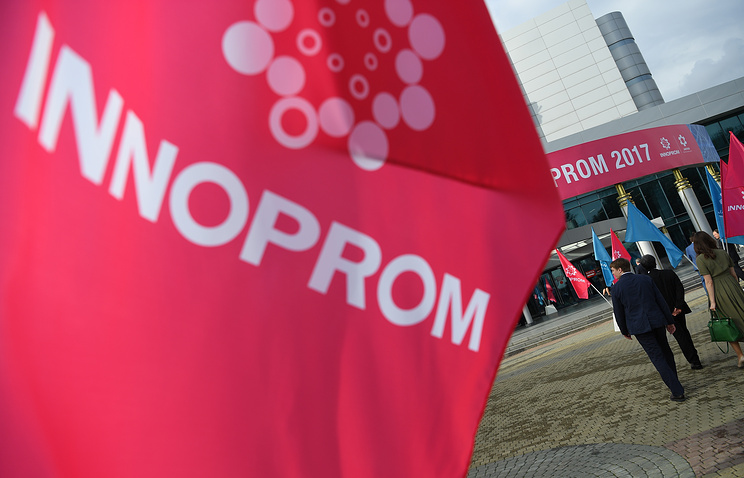 YEKATERINBURG, July 10. /TASS/. Industrial Internet innovations for industry, automation and robotics, mechanical engineering and production components will be the main topics of the business program of the international industrial exhibition “Innoprom-2017”, which opens in Yekaterinburg.

The exhibition “Innoprom” held in Yekaterinburg seven years ago, in recent years export has become the main showcase of Russian industry. Annually at the exhibition representatives of thousands of companies from around the world. This year the partner country of the exhibition was Japan.

One of the guests of the exhibition will be the President of Russia Vladimir Putin. The head of state arrived in Ekaterinburg on Sunday and took part in the opening ceremony of the event, where he said that digital technology is a “powerful resource” for the development of Russia. According to Putin, the exhibition this year Russian companies are actively introducing advanced digital technology.

“It is very important to see their actual effectiveness and practical results, such as improvement of working conditions, increase productivity, lower costs, modern management level and, ultimately, improving the competitiveness of domestic products, goods and services,” the President said.

The digital economy has also been one of the main themes of the summit of leaders of “twenty”, which ended in Hamburg on 8 July. According to the Minister of industry and trade Denis Manturov, the share of digital production and services in developed economies already accounts for more than 5%, experts predict its further increase.

“Today, we are direct participants in the biggest technological revolution,” said Manturov at the opening ceremony of “Innoprom”.

Business program of “Innoprom-2017” includes ten major international conferences and more than 100 specialized round table discussions, industry seminars and presentations. The exhibition will be attended by representatives of about 600 industrial companies from 95 countries. Only from Japan will be representatives of 168 firms.

The Russian government, in addition to Manturov, will be presented to Deputy Prime Minister Arkady Dvorkovich and Minister of economic development Maxim Oreshkin. The exhibition will be attended by the heads of the Russian largest industrial corporations.

In addition, 10 July will be the main strategic session on “Smart manufacturing: competition models VS competing technologies” in which in due time will be awarded the National industrial award “Industria”, which aims to promote the deployment of advanced technologies in industrial production of Russia.

In 2017 “Innoprom” will confirm its status as the main platform for industrial exports in Russia. In the framework of the business program 11 and 12 July will host an international forum for the development of industrial exports Forum IndEx (Industrial Export Forum) with the participation of the largest foreign buyers of Russian industrial products and domestic suppliers.

According to Deputy Minister of industry and trade of the Russian Federation Georgy Kalamanov, the special place in the business program and the exhibition will be given to the machine tool, Metalworking, robotics, and digital industry. “It is very important to support export development, we believe that the business program of Innoprom will bring Russian products on world markets,” said Kalamanov.

The Chairman of Vnesheconombank Sergey Gorkov will present the first pilot projects of the NGO “Conversion” – a joint venture between VEB and the state Corporation “rostec”, which should ensure the transition of technology from the enterprises of the military – industrial complex to the civilian sector and promotion of high-tech civilian products for the domestic market. The VEB believes the diversification of the military-industrial complex is one of the priorities of the Bank.

Japan in the status of the partner country will organize the exhibition in Yekaterinburg impressive national exhibition: stands of Japanese companies will occupy an area of 4 thousand square meters. Experts from Japan will show the technical achievements in the field of energy, virtual reality, artificial intelligence, space exploration, the environment and crop production.

“We would like people in Russia like you know more about Japan, so we plan to show not only the achievements of the industry, but also Japanese food,” – said the representative of the Ministry of economy trade and industry of Japan, Tsutomu Nakagawa.

According to him, the stand of the Ministry of agriculture of Japan, I will try some sake, green tea, sushi, and also attend the seminar. On the first day of the exhibition will be held a master class on cutting tuna raised in captivity on the technology developed in Japanese universities.

A special place in the exhibition business program is the cooperation with China. According to the Consulate General of this country in Ekaterinburg, almost 170 companies have confirmed their participation in the Russian-Chinese contacts exchange. It is planned that the sides will discuss the development of electronic Commerce, including in the framework of contracts signed in Yekaterinburg in the past year. Then managed to reach 28 agreements for a total amount of 53 billion rubles.

The experience of “Innoprom” will help with EXPO

As Putin said, the experience of the organization of “Innoprom” will help the Ekaterinburg world universal exhibition EXPO-2025 if the city wins the contest for it.

“Certainly, the experience of “Innoprom” will help to hold the EXPO at the highest level, if it is entrusted to our country,” Putin said at the opening ceremony. In addition to Yekaterinburg, to the right of the exhibition expect the Paris, Tokyo and Baku.

According to the Director of the direction “Young professionals” Agency for strategic initiatives (ASI), Dmitry Peskov, for the first time at “Innoprom” will be presented the logic of the organization of the digital world in the industry of the future. “Not of the digital industry, which is today, and one that is rapidly coming to us. We know that in different countries different answer to this challenge, which is changing the industry and the economy, and society, and social relations,” – said Peskov.

ASI in the framework of the National technology initiative, which has already connected nearly 500 Russian companies trying to develop a vision of changes in industry, society and the economy within the next 20-30 years. “We have presented the individual model projects in different Russian institutes and companies: “Rosnano”, “SKOLKOVO”, Russian venture company and many others. From each, maybe it will grow a new industry, which even today does not exist. We build a philosophy of how this industry should develop,” – said Peskov.

For the first time in eight years on “Innoprom” will discuss the development of the Arctic. In particular, in the framework of the exhibition will be an expanded meeting of the joint working group of the Ural and Siberian Federal districts to assist in the promotion of scientific and production potential of the regions and implementation of projects in the Arctic. In discussion will take part the authorities of the Arctic regions, and also representatives of the Plenipotentiary representation of the President in the Urals and in Siberia.

“Of course, we hope that the international innovation forum will bring our region to a new level of cooperation and development. This is evidenced by the experience of past exhibitions,” – said the acting Governor of Sverdlovsk region Evgeny Kuyvashev.

“Each show is like an exam, we expect success to pass it. “Innoprom-2017″ will give impetus to development of relations with Japan,” said Kuyvashev.