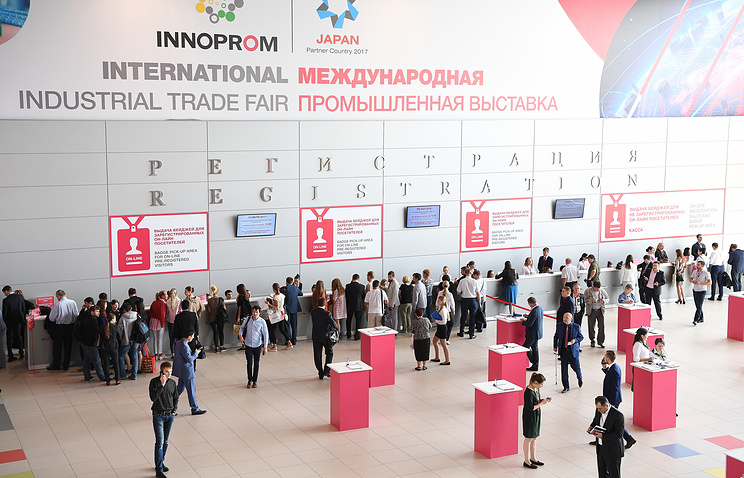 YEKATERINBURG, July 10. /TASS/. International exhibition “Innoprom”, which has become in recent years the main export showcase of Russian industry, demonstrated the latest samples of high-tech products of Russian enterprises during the first day of work.

President Vladimir Putin, who became one of the first visitors of “Innoprom”, praised the development, in particular the monitoring system of wakefulness of drivers, self-driving car “Shuttle” and a drone with a defibrillator.

“The correct thing,” – commented Putin is developing a system to control the “Slip alert”, created with the use of Neurotechnology in the National technology initiative. The system detects a state of fatigue, distraction, drowsiness and warns the driver falling asleep.

In the course of the exhibition the head of state got acquainted not only with the advanced developments of domestic companies, but with the inventions of the talented children, who gave him a designer develops “grandchildren”, and showed a robot Salamander.

A lot of time Putin held the presentation of the service 4.0.ru that allows you to provide digital simulation of parts, tools and complete production processes, and the ability of digital Assembly and testing.

The main discussion during the business program of the exhibition revolved around smart production and use of robots. The Minister of industry and trade Denis Manturov at the plenary session said that robots can help in the development of remote areas.

“We have a vast territory, but many of its parts are simply inaccessible to humans. It’s a great platform for robots,” he said. Minister urged not to fear of rising unemployment due to the development of robotics and recalled that the same fears existed in the beginning of the use of incandescent lamps.

Manturov proposed in 2019 to be held in the framework of the international industrial exhibition “Innoprom” in Ekaterinburg the second Global summit of production and industrialization – a new international platform for the discussion of industrial growth. The first such summit was held in March 2017 in the United Arab Emirates.

According to Deputy Chairman of the economic Council under the President, former Finance Minister Alexei Kudrin, companies that are not invested in the digitalization of six years will lose their production. “Those who do not work today with the “figure,” six years will lose their production. Everybody should understand. We have this understanding yet,” he said.

Kudrin stressed that Russia is far behind from the world of digitalization, so you need to solve the issue of stimulating these processes, it should help a government program of development of the digital economy.

Another topic of the business program of the exhibition was the production of high-tech products for civilian and dual-use at the enterprises of the military-industrial complex.

VEB and Russian technologies, which created the Agency “Conversion” for the promotion of such products on Russian and international markets, has announced the first eight projects worth about 10 billion rubles.

Delegations from several countries in the Middle East is interested in the presented at the exhibition of armored bulldozers, developed at the Chelyabinsk tractor plant, a part of Corporation “Uralvagonzavod”. The General Director of Corporation Alexander Potapov has compared this car with the “peacefully plowing tank”.

“Our bulldozer can operate in mountainous terrain, debris dismantling. Take any country where the agriculture is developed, but fighting is going to be planted, plowing is necessary, it is necessary to grow, so this “peacefully plowing tank”, unfortunately, in demand. If not for the armor, he certainly would have been easier, but life is different,” said Potapov TASS.

On the first day of the exhibition signed a number of major agreements. In particular, KAMAZ till the end of August this year, intends to supply the retailer X5 Retail Group 100 methane-diesel trucks, and the Japanese Isuzu will start joint assembling of buses in the Ulyanovsk region.

“Smart industry” and “the connected economy”

The partner country of Innoprom this year was Japan. The Japanese stand with a total area of 4 thousand sqm was massively introduced to miniature robots that are able to put small items in the box, and in 3D, complete immersion.

Those wishing to make a trip to virtual Japan lined up. While some visitors wore 3D glasses that look like the helmets of the space Rangers from a science fiction movie, others tried to master the management of Japanese robots.

On the sidelines of the exhibition Manturov and the Minister of economy, trade and industry of Japan, Hiroshige Seko discussed the possibility of cooperation between the two countries in the development of “smart industry” and “connected economy.” “I believe that our two countries can cooperate in this direction, in particular, to bring to the industry of our countries an even greater element of information technology,” said Seko.

International industrial exhibition “Innoprom” held in Yekaterinburg annually since 2010. This year the exhibition runs from 10 to 13 July, the main topic was “Intelligent production”.

The exhibition organizer is the Ministry of industry and trade of the Russian Federation. General media partner and the operator of the press centre of information Agency TASS.