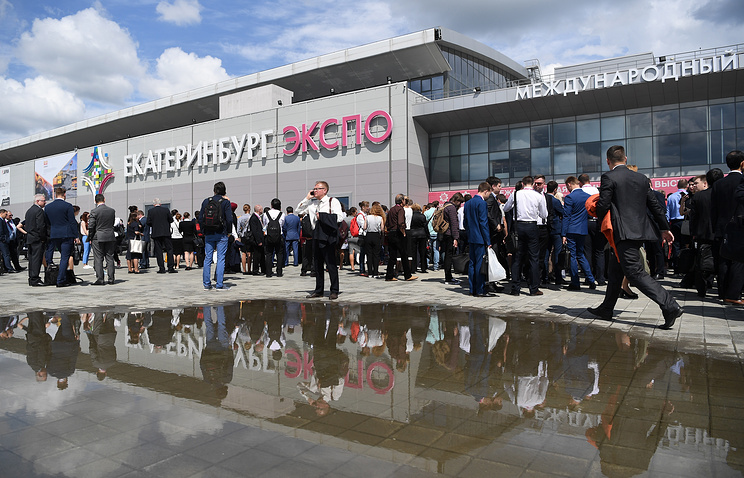 YEKATERINBURG, July 13. /TASS/. International exhibition “Innoprom-2017”, the main export showcase of Russian industry, completed its work in Ekaterinburg, where he demonstrated the potential of domestic enterprises, high quality products which has surprised many foreign and Russian participants.

The main topics of the business program of the exhibition were tsifrovizatsii industrial production, the transfer of enterprises of the military-industrial complex to civilian production, and the complexity of financing industrial enterprises and projects.

The main partner of “Innoprom” this year was Japan, where representatives from some 160 companies, including global giants Kawasaki, Mazda and Mitsubishi. A representative delegation Ministerial trade profit from a number of middle Eastern and African countries.

“We see great interest of foreign partners to the “Innoprom”. To us this year came a lot of Ministers responsible for industry. We hope that in future years this trend will continue,” – said the Minister of industry and trade Denis Manturov in an interview with TASS on the sidelines of the exhibition.

The quality was a surprise

A wide range of Russian industrial products, which in recent years has increased due to the policy of import substitution and also due to Western sanctions, banning the supply of many types of high-tech equipment to Russia, came as a surprise to many exhibitors.

The Central exhibit of the stand of the company “Uralvagonzavod”, known as a manufacturer of tanks was the armored bulldozer to work in the hot spots, developed in the framework of diversification of production. In most companies, the bulldozer called “plowing tank”.

Holding “Schwabe” presented about a hundred “smart” development, including a range of satellite instruments for surveying, interactive medical chamber and a portable incubator, which is still the only mobile incubator in domestic production.

Siemens, “Kaspersky Lab”, “Stan” and “Itelma” showed a joint project of the digital simulation of manufacturing processes “4.0.ru” that allows for the possibility of a digital Assembly and testing, and virtual control over them.

Research automobile Institute US for the first time revealed the engine lineup of limousines for the first persons of the project “Cortege” with power up to 850 HP, and a unique nine-transmission, the first automatic transmission, fully developed in Russia.

The largest machine building enterprise of Vladimir region, Kovrov Electromechanical plant (KEMZ), one of the leaders of the domestic machine tool industry this year for the first time presented its exposition at Innoprom.

A resident of Technopark of high technologies “University” in the Sverdlovsk region design Bureau “Balloon” showed a prototype of the gun for landing drones offenders “Barrier”. With this device you can put quadrocopter within a radius of half a kilometer.

In parallel, in Yekaterinburg have been dozens of exhibitions and concerts with participation of the Ural and Japanese musicians. Japanese pianist Momo Kodama gave a concert with the orchestra “Tchaikovsky”, musicians from ten countries who came to study in Ural summer orchestral Academy.

According to the Vice-Governor of the Sverdlovsk region Alexei Orlov, the total economic effect from the exhibition for the region will amount to 1.5 billion rubles.

Exhibitors also highlighted the problems of the industry. One of the most serious – high level of Bank interest rates, which reduces the competitiveness of Russian enterprises in foreign markets where foreign competitors can supply products without payment or credit at a zero rate.

Heads of the enterprises complained that the system of Bank lending of this field is “decorative”, venture capital financing is in its infancy, and companies are forced to spend most of his efforts on the production of industrial products, and in search of money.

“Meanwhile, with industrial companies from other countries will supply the global market, work with banks at a negative rate and occupy most of the market”, – said during the discussion, the co-Chairman of “Business Russia” and the head of the machine tool company “the Mill” Sergey Nedoroslev.

The executives also noted that Bank lending to the so-called pioneer projects, such as, for example, the production of Russian microprocessor “Baikal” is impossible because of the lack of company collateral in accordance with strict requirements of banks.

Manufacture of pots on rocket factories

Industrialists discussed how the diversification of production of defense enterprises to avoid repeating the bad experience of conversion in 1990-e years when to survive in the market conditions, the plants switched to the production of consumer goods, losing the unique competence.

According to the instructions of the President the share of civilian products in the defense industry is expected to grow to 30% by 2025, from 16% now. The necessity of transition of the enterprises of the military-industrial complex (MIC) on the production of civilian goods caused, in particular, the planned completion of the program of technical re-equipment of the armed forces.

The painful transformation of the defense industry in the 1990-ies, which led to unpaid wages, the use of plants as warehouses or shopping sites, the raids still makes many managers and employees of defense enterprises, the distrust of the plans of diversification of production.

“Previous experience of conversion compromised by the fact that all rushed to the production of simple consumer goods. Even missile plant called bucket, this was a joke,” – said in an interview with TASS Deputy Chairman of Vnesheconombank Petr Zolotarev, remembering often occurred in 1990-e years, the cases of the production of kitchen utensils and other household items in the defense plants.

He stressed that with today’s diversification we are talking about high-tech products, and named as examples of such products medical equipment and instruments to ensure the effectiveness of energy consumption or security.

“For people who have gained tremendous managerial and engineering experience, of course, sometimes it sounds like destruction. But I believe that it is not necessary to be treated, – said Zolotarev. – Those who will not be afraid to do it, get amazing results, as, for example, the concern “Kalashnikov”.