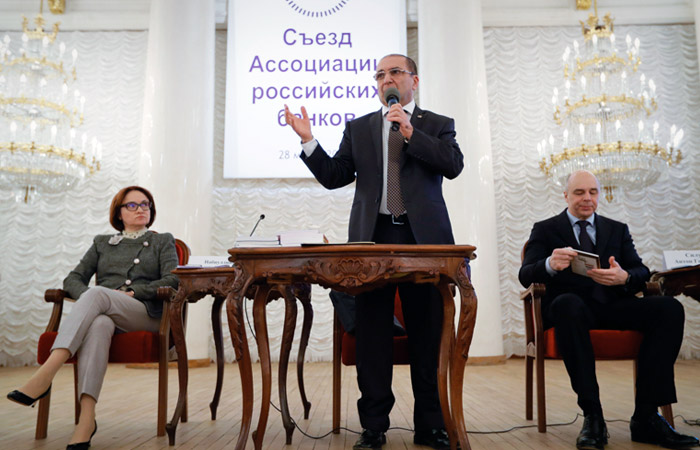 “Decisions are often made by the President of the Association single-handedly and are populist in nature, and the lack of calm, measured dialogue between him and credit institutions hindering the further development of the Association,” – said in a press release. It is noted that numerous proposals of members of the Association on personnel changes in the leadership of the ARB and the change of its principles were not heard.

“Given the above, we accept the decision to withdraw from the Association and we consider inadmissible all further actions carried out on our behalf,” – said in a press release.

“We have to admit that in recent years the effectiveness of the Association’s activities has been steadily declining. This is largely due to the poor performance of its leadership, which, in our view, when making decisions ceased to consider the interests of its members”, – stated in the statement of credit institutions.

It also States that banks will look for new forms of interaction with the Central Bank and government agencies. One type of interaction may be a new professional Association, said in a statement.

“We categorically reject the charges of some credit institutions that the report’s conclusions do not correspond to the opinion of the members of the Association. The big banks – members of the Association can (and always could) to take an active part in the formation positions of the ARB on the development of financial market”, – reads the statement of the President of ARB Tosunyan.

As reported, on the eve of the Congress of the ARB in late March, Alfa-Bank announced that it was suspending membership in the Association of Russian banks because of disagreement with the conclusions and assessments contained in the report to the annual Congress of the ARB. The claims of Alfa-Bank relate primarily recorded in the report of the thesis related to banking regulation and actions of the Central Bank of the Russian Federation.

According to information on the Association’s website, it has a population of 456 members, of which 282 – credit organizations. Membership fees in ARB depend on the quantity of capital of banks: the larger the credit, the more the amount of the contribution. Thus, banks with a capital of 100 billion roubles (into this category fall announced its release of the banks) pay to the Association a 1.5 million rubles.

“The Association really cares about each member, but the exit of individual banks (both large and small) from the Association should not globally affect the activities of ARB. The Association will work with those members who can see meaning in our corporate work,” – said “Interfax” in the ARB.

Decisions about changes in the leadership of the Association is exclusively within the competence of the Council and of the Congress of the ARB. The output of one or several banks, large or small, in any way with those not affiliated, said the Association.

Another President of the banking Association (Association “Russia”) Anatoly Aksakov, who heads the state Duma Committee on financial market, expressed regret in connection with the release of ARB of the largest banks.

“I regret to perceive this news, because after all it is a friendly Association that we interacted that much has been done for the development of norm-setting in the financial sector. Of course, out of these large banks who actually control 70% of the banking system, operate on 70% of the assets – the bad news for this organization,” – he said “Interfax”.

“With regard to the future of the banks – it is clear that many of the issues they had and without the Association, as they are very large and influential. And German Gref (head of Sberbank), and Kostin (head of VTB), and Akimov (Chairman of Gazprombank) meet regularly with the President and with the Prime Minister and head of the Central Bank. Many of the issues they can address in addition to Association, from this point of view it is the Association in principle is not needed. But there are issues of interest to all the banking community and bring together all the banking community. This is connected with the law and with the regulations, and generally create an atmosphere in the market. And here, of course, need strong associations and large banks, medium-sized and small,” – said Aksakov.