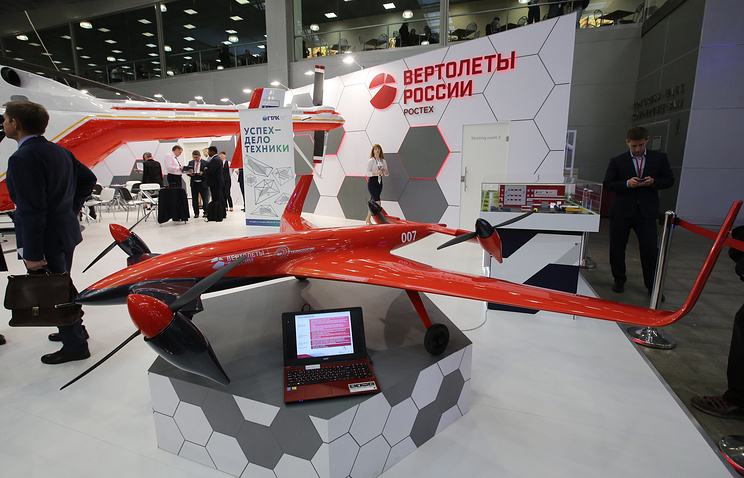 ZHUKOVSKY /Moscow region/, July 18. /TASS/. Holding “Helicopters of Russia” (included in rostec) at the International aviation and space salon MAKS-2017 for the first time will present the experimental prototype of an unmanned tiltrotor VRT30. About it on Tuesday have informed in a press-service of the holding.

“Currently, the drone passes the next stage of flight tests, the technical groundwork for this project will be used to create a unique character with a takeoff weight of up to 2 tons. On static display at “Helicopters of Russia” will be presented the experimental sample, which is now undergoing flight tests,” said holding.

The press service noted that the fourth quarter of 2017 convertiplane VRT30 will be released on the second phase of testing, during which it will be tested in various flight regimes, weather conditions and target elements of the payload.

The “indicative yield of the UAV in series production is scheduled for late 2018. To date, a fully perfected flight and hovering with the rejected screws go mining in automatic control systems on the stand for flying in airplane mode”, – reported in the holding.

As explained in the “Helicopters of Russia”, VRT30 is a flying laboratory on the basis of which a number of systems formed the technical groundwork for the creation of similar machines with a takeoff weight of up to 2 tons. In this promising tiltrotor plan to use the latest technology of superconductivity, developed by the company “Superox” that will reduce the mass of the power plant, components of power generating systems and power supply systems.

“Thus will increase the payload mass that will make the device commercially attractive to a wide range of customers,” – said General Director of holding Andrey Boginsky, whose words are resulted in a press-service.

International aviation and space salon is opened on Tuesday in Zhukovsky near Moscow and runs until July 23.

Its products within its framework, will introduce more than 650 Russian and foreign companies.