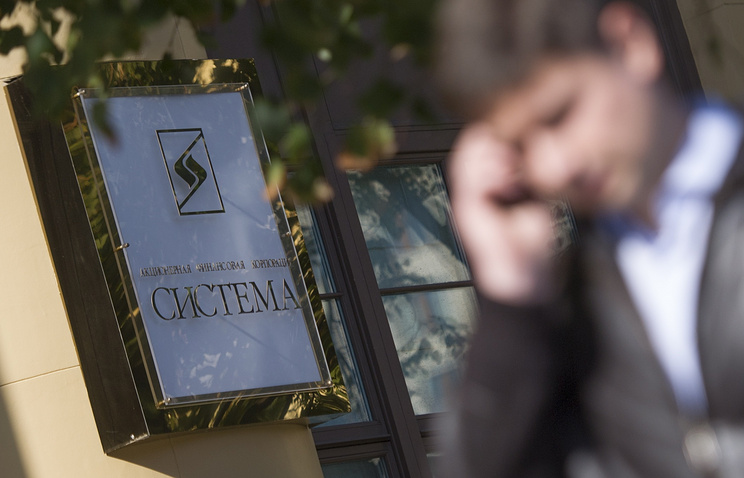 MOSCOW, July 17. /TASS/. AFK “System” on Monday announced a technical default on credit obligations in the amount of about RUR 3.9 bn due to seizure at the suit of Rosneft, explaining that the default is a mere formality. While experts also believe the situation is not critical, however, not exclude the occurrence of cross-default on other obligations.

“In this form it is not critical, it just means that technically there is a violation of certain obligations. Seizure of assets itself was written as a Covenant that allows you to demand early repayment of this debt. Technically the AFC was to ensure that she will not support the arrest,” – says the analyst “URALSIB capital” Konstantin Belov.

Earlier, the court on the petition of “Rosneft” and “Bashneft” seized belonging AFK “System” 31,76% of MTS shares, 100% of the network of clinics “Medsi” and 90,47% of shares of Bashkir power grid company (BESK). According to the rating of “Rosneft” presented to the court, the value of this property is 185 billion. However, according to Sistema, the aggregate cost of the shares for which it was seized, even without the BESK is about 250 billion roubles, the Press – Secretary of Rosneft Mikhail Leontyev said that this measure is aimed, in particular, to protect the rights of shareholders “Rosneft”.

The impact on creditors

The “System” assured that he does not expect the filing of creditors on early repayment of obligations due to announced on Monday solutions. “Since July 17, will be violated by the conditions of the seizure of assets worth more than $ 25 million. A particular transaction not comment, it’s a small volume agreement. We do not expect the presentation of creditors on early repayment of these obligations, since ROS serves and plans to serve all its obligations timely and in full volume”, – said the representative of “the System” Sergey Kopytov.

“Accordingly, the “System” says they don’t expect there will be some requirement for early repayment, but even if so, I don’t think this is critical, because it is a relatively small part of the debt. How it is solved? I think there will be negotiations with creditors, and if they suddenly they want redemption, then you will need to repay. But in principle, not necessarily that it will occur,” – says Belov.

The market has also not reacted to the event of sharp price movements. In early trading, shares of AFK “System” on Masuria decreased by 3.4%, and then reduced the drop to 1%. By the end of the day the company’s shares once again fell back to 2.5% down on closing of trading on July 14. However, this reduction was not as significant as in the spring. For comparison, may 3, after the first news about the lawsuit, the price has fallen by 37%.

Despite the modest effects of techdepot, the downside risks to the Outlook for the debt of AFK “System” are present, the analyst believes “Opening the Capital” Alexander Vengranovich. “We believe that the company may face the risk of additional technical defaults on its other lines of credit for a maximum amount of 34 billion rubles. We also note that the “System” has a potential default on its Eurobonds (as defined in Chapter 10 of the prospectus for the Eurobonds), and the company must enter into a formal agreement with the banks within 30 days to avoid a default on its Eurobonds,” writes Vengranovich in the report. On Monday, dollar-denominated Eurobonds of “the System” maturing in 2019 fell to 5,455 percentage points to 91,054% of par.

The situation with the AFK System is quite ambiguous, analyst UK “the alpha-the Capital” Alexey Gubin. “On the one hand, the Issuer will retain the ability to meet obligations even if unfavourable to them decisions of the court, and on the other it is obvious that the risks are outside of the financial condition of the company and poorly calculable”, the expert noted, Recalling that on 18 July there will be another court hearing.

The Zamoskvoretsky court of Moscow has appointed on 18 July, the consideration of the merits of the application, Sistema challenging the notarization of correspondence former managers “Bashneft”, attached to the materials of the case on recovery of the Corporation is 170.6 billion roubles under the claim “Rosneft”. Correspondence attached to the case by the Arbitration court of Bashkortostan on 6 June and, according to the oil company, testifies to deliberate infringement of the legislation and the damage of “Bashneft” in the reorganization of the company. AFK “System” on June 15 filed a petition in Zamoskvoretsky court of Moscow about a recognition illegal and cancellation of notarial actions by the assurance of the correspondence of managers. The AFC believes that this procedure was carried out with violations, and therefore the correspondence cannot serve as evidence in court.

“Rosneft” and affiliated “Bashneft” has submitted to Arbitration court of Bashkortostan claim to recover from Sistema and its subsidiary “Sistema-invest” 106,6 billion roubles of the losses caused, according to the plaintiffs, “Bashneft” as a result of its reorganization in 2014, Subsequently the amount of the claims of the plaintiffs increased to 170,6 billion rubles taking into account exchange rate differences. The lawsuit was also joined by Bashkortostan, which owns 25% plus one share in Bashneft. AFK “System” does not agree with these claims and considers them unfounded