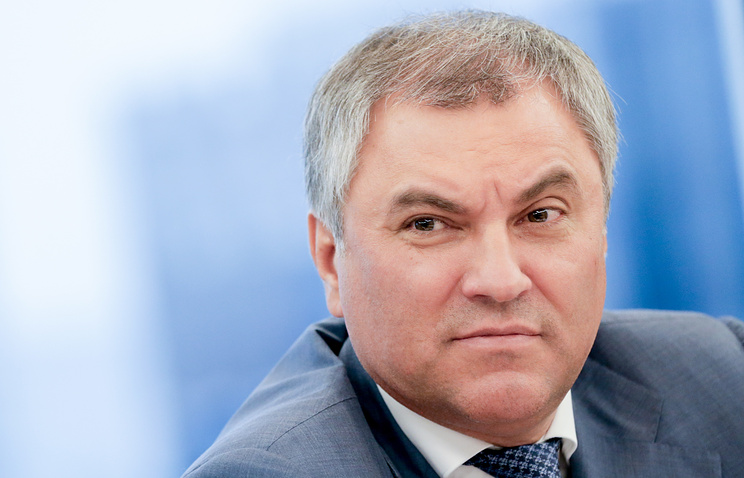 MOSCOW, July 17. /TASS/. Chairman of the state Duma Vyacheslav Volodin called a throwback to the deprivation of the Russian delegation’s voting rights in the parliamentary Assembly of the Council of Europe (PACE) and stressed that such decisions put an end to parliamentarianism.

“General deprivation of a speech and the lack of dialogue in any of the parliamentary and especially the inter-parliamentary structures is contrary to the very foundations and meaning of parliamentarism, because the Parliament is the place where there are discussions where I Express point of view and if you like, through adversarial and rationale point of view, produced the best solutions,” – said Volodin Monday at a meeting with Chairman of the National Assembly (Parliament) of Armenia Ara Babloyan the.

“And when one of the parties to take and are deprived of speech and voice, look, is this guy a throwback, which in principle puts an end to the parliamentary system”, – said the speaker. He noticed that this makes one of the oldest European parliamentary organizations. “And why does? Afraid, perhaps, that their colleagues can say and convince others”, – said the head of the lower chamber of the Russian Parliament.

“The other is no argument. Caulk thus the mouth and the deprivation of the word – assault on the fundamental rights not only of citizens but also the rights of countries that have delegated their deputies as representatives of the people, – said Volodin. – Take the whole nation, millions of people denied the right to Express their position”.

Chairman of the state Duma is convinced that it is unacceptable. “While such a regulation exists in the parliamentary Assembly of the Council of Europe, we are not participating in the part of PACE,” he warned.

The Russian delegation in PACE in April 2014 was deprived of powers due to the events in Ukraine and the reunification of the Crimea with Russia. In 2015, the PACE has twice considered the question of the restoration of the Russian delegation of its rights, but the sanctions remained in force: Russia deprived of voting rights and participation in the governing bodies of the Assembly and its observation missions for elections in the space of the COE.

In response, Russia said it would suspend its involvement in PACE activity until the end of 2015. In January 2016, the Russian delegation refused to apply for authorization for that year.

In early June, Vyacheslav Volodin told reporters that Russia blocked in the current year the payment of one third of its contribution to the CE, which could go to Fund the PACE. According to him, it is estimated about €11 million.