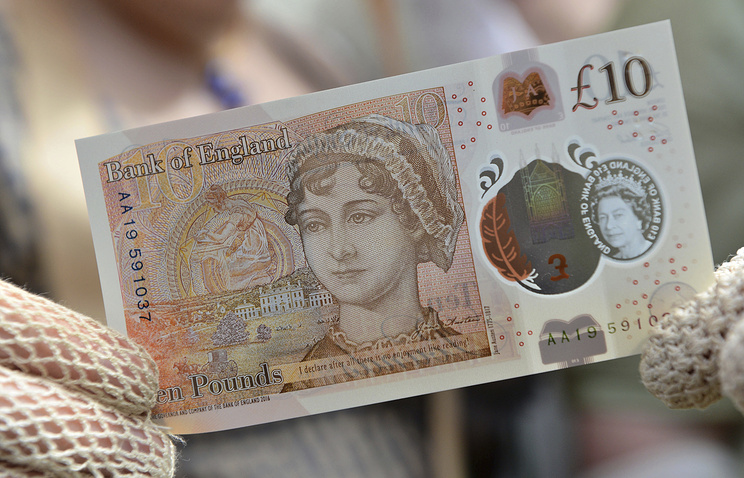 LONDON, July 18. /TASS/. The Bank of England, performing the functions of the British Central Bank, officially unveiled on Tuesday a new bill from synthetic polymers with a nominal value of £10, which depicts a portrait of the famous writer Jane Austen.

As reported by the Daily Telegraph newspaper, the presentation of the bills took place in the Cathedral city of Winchester, in which is buried the “first lady of English literature”, the 200th day of the dead which is celebrated this year.

“The new 10-pound banknote celebrates the works of Jane Austen. Her novels are loved by all and today produces an equally strong impression, as in the time when it was just printed,” – said at the ceremony the head of the Bank of England mark Carney.

A new bill in size is 15% less than that which is now in circulation and which depicts a portrait of Charles Darwin. In the upper left corner of the banknote are raised dots that allow the blind to easily distinguish the cards. On polymeric surfaces depicted Desk Austin and manor belonged to the brother of the writer of noble estates, Godmersham Park, which Jane repeatedly visited and which inspired her to write many works.

The bill also printed the phrase miss Bingley saw in 1813 the light of the novel “Pride and prejudice”: “frankly, I know no enjoyment like reading”. However, the fact that the choice of the Bank of England was stopped on this sentence, aroused strong criticism from the fans of Austin. They expressed surprise that next to the portrait of the writer is her own quote, and the statement of one of the characters works. Besides, according to them, miss Bingley is one of the most unpleasant characters in the novel, which actually does not like to read, but it says in order to impress.

After appeals were withdrawn before going 5-pound notes with a portrait of the reformer of the prison system of England, Elizabeth fry, portrait of Austin will be the only female image on the money in the UK after a portrait of Queen Elizabeth II.