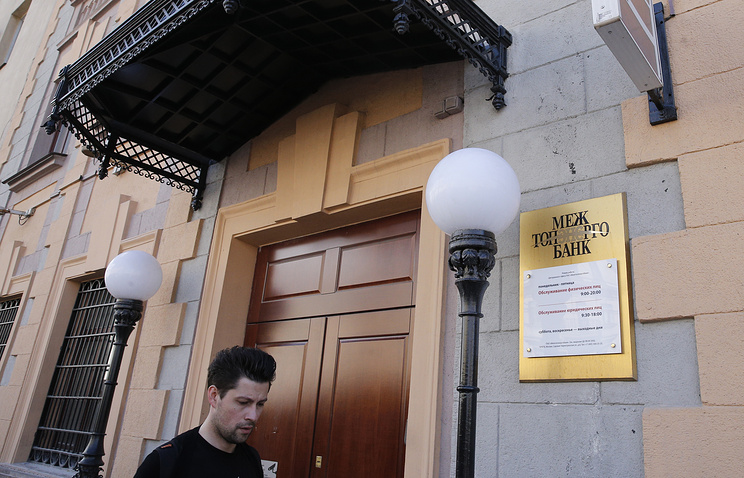 MOSCOW , July 20. /TASS/. The Bank of Russia has withdrawn since July 20, 2017 license for banking operations of the Moscow Mezhtopenergobank, the regulator reported. According to statements by total assets of a credit institution that is a participant of system of insurance of contributions, on July 1, 2017 it was ranked 108-th place in the Russian banking system.

According to the Bank, Mezhtopenergobank placed funds in low-quality assets, including in the construction and investment spheres, and failed to adequately assess credit risks. In addition, the credit institution does not comply with the requirements of the legislation and statutory acts of Bank of Russia in the field of combating the legalization (laundering) of incomes obtained in a criminal way and financing of terrorism in terms of identifying transactions subject to mandatory control, as well as the submission of the required information to the authorized body.

According to the report, the Bank of Russia repeatedly applied to the Mezhtopenergobank measures of Supervisory response, including twice introduced restrictions on attracting deposits of the population.

The management and owners of Bank didn’t take effective measures on normalization of its activity. Moreover, their actions showed signs of dishonest behavior, expressed in the withdrawal of assets to the detriment of the interests of creditors, underscores the regulator.

As a result, the Mezhtopenergobank due to the unsatisfactory quality of assets not generating sufficient cash flow, they have been unable to timely fulfill obligations to creditors.

By order of the Central Bank Mezhtopenergobank assigned temporary administration by period of validity till the moment of appointment of the liquidator or liquidator. The powers of the Executive bodies of the credit institution are suspended.

Payments will begin not later than August 3,

As reported by the Agency on insurance of contributions (ASV), payment of insurance compensation to depositors will start no later than 3 August.

For operational reception of statements of citizens and the fastest payments of compensation on deposits DIA intends to use the agent banks that will be selected on a competitive basis no later than July 26.

What preceded the revocation of the license

Mezhtopenergobank July 14 issued a press release in which it reported that it is preparing an appeal to the leadership of the Bank of Russia on assistance, including using the Foundation tools of consolidation of the banking sector. This decision was taken following the meeting of the Board of Directors, which discussed measures on financial rehabilitation of credit organizations.

In particular, the measures include the optimization of the organizational structure of the Bank to reduce administrative costs, the realization of assets and the refinancing of liabilities, which will provide additional liquidity in the amount of about RUB 5 billion, and also plans to provide financial assistance for founders and major creditors by depositing the funds in the authorized capital and deposits.

In addition, the Board of Directors decided to stop the payment of dividends on preferred shares in 2016, is scheduled after July 17.

At the end of June Mezhtopenergobank has suspended services to legal entities and individuals, and in early July temporarily closed some of their offices, while other offices continued to work in the consulting mode.

The Bank also reported difficulties when making payments in connection with the lack of available liquidity. The Bank then noted that the financial condition of credit organizations have become less stable under the influence of a number of factors, due to the negative market situation, in particular in the construction industry.