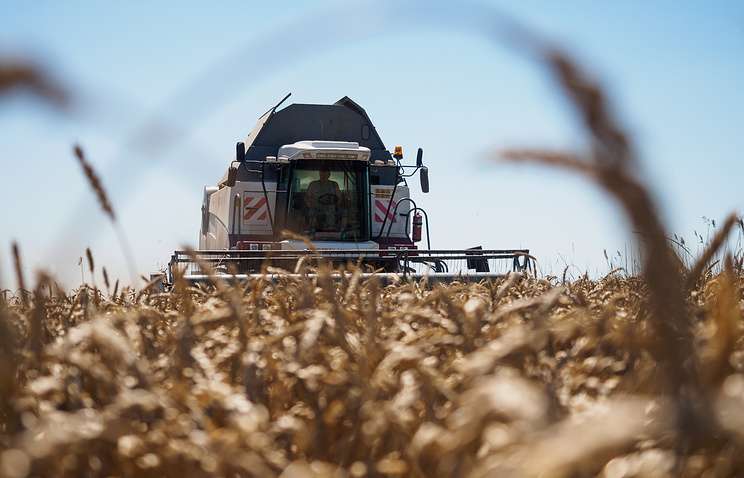 TASS, July 26. Indicators of harvest of grain in the southern regions above last year’s levels, despite the bad weather in the spring and early summer. Grain crops that are close to the records are expected in the Krasnodar region in the Crimea, said on Wednesday the authorities of these regions.

Earlier, the Minister of agriculture of the Russian Federation Alexander Tkachev noted that adverse weather conditions have shifted the timing of the harvest in two weeks, but the loss of crops is minimal. In mid-June, the USDA announced a possible decrease in yield of grain, potatoes and sugar beet in Russia in comparison with last year.

Kuban again going for the record

The gross grain harvest in the Kuban region has already exceeded 10 million tons to 183 thousand tons more than during the same date a year earlier. Including wheat have been collected 8.9 million tons. Cleaning will be completed this week, said Wednesday the head of the region Veniamin Kondratiev in his microblog on Twitter. “The yield is already higher than last year. And this in spite of a rainy June. Edge again goes on record,” wrote the Governor.

Cereal grains and legumes have been harvested on 99% of the acreage in the region, yield – above 63 kg/ha, 2.8 t/ha exceeds the performance of 2016. In the last year in Krasnodar Krai have collected 14.7 million tons of grain.

In the neighboring Rostov region grain production exceeded 8.8 million tons with an average yield of almost 40,9 dt/ ha. As told TASS in the regional Ministry of agriculture, in connection with private rainfall grain-harvesting campaign started later than usual, including later than last year, and was frequently interrupted by rains and downpours. This caused some lag in comparison with the previous year.

“However, in the last weeks, taking advantage of favorable weather conditions, don farmers accelerated the pace of harvesting, and today rates are already higher than last year. So, if last year on the same date the grain was threshed on an area of 1,989 thousand hectares (or 69.1 %), today processed 2,165 thousand hectares (or 73.1%)”, – said the Agency.

The head of the region Vasily Golubev said earlier that “step over the record 2016 is very difficult,” but it is hoped to show good results. Last year the harvest of grain harvested in the Rostov region amounted to more than 11.7 million tonnes is the absolute historical record of the region.

Farmers of the Stavropol territory are also nearing the completion of harvest, harvested 91% of the acreage. “At the moment, has already collected 8.1 million tons of grain. The average yield – 43,4 t/ha is above the level of the previous year (101%). The volume of the harvest – about the same as last year or even slightly more. In 2016, the same period, there were around 7.9 million tonnes of grain,” – said TASS in the press service of the Ministry of agriculture of the region.

The variation in yield

According to the authorities, in the Turkmen district of the province at different companies, there was great variation in the level of productivity among the reasons for the backlog of “outsiders” – low percentage use of elite seeds, inadequate amounts of applied mineral fertilizers, the shortage of machine and tractor fleet.

“It is necessary to promptly conduct monitoring of areas where there is a high difference in yield, and to carry out a qualified analysis of the situation, in the future to avoid big losses during harvest”, – the press service quoted Minister of agriculture Vladimir Sitnikov.

“Average” is not far behind

Agrarians of the Crimea, according to the speaker of the state Council of the Republic Vladimir Konstantinov, already harvested 1.5 million tons of early grain crops, the harvest, he said, promises to be good. As stated a week ago, Vice-Premier of the Crimean government Yuri Gocanux, according to preliminary data, this year will be collected 15% more grain than a year earlier. This is a record for the last 10 years the harvest on the Peninsula. In 2016, Crimea has collected 1.3 million tons of grain.

In Kalmykia already collected 463 thousand tons of grain, mainly wheat and barley. “Harvested area of 178,7 thousand hectares, just have to remove 224 thousand ha. In total, the projected to collect grain at the level of last year, that is not less than 500 thousand tons. Rainy weather in spring and early summer did not affect the harvest, now in Kalmykia to establish a favorable, Sunny and hot weather. Harvesting farmers are expected to be completed in late July – early August,” – said TASS in the local Ministry.

The company informed farmers of Kalmykia gathered a record grain harvest over the last few years – about 500 tons – more than 140 thousand tons more than in 2015. Due to the favorable weather.

A somewhat different situation is developing only in Adygea. As reported TASS the head of Department of plant growing of the Ministry of agriculture of the Republic of Abregov Emma, this year’s crop is planned to collect about 600 thousand tons of grain – about 400 thousand tons of winter crops plus 200 thousand tons of spring crops, that, in General, about 80 thousand tons less than last year. “The weather impact was flooding, hail was coming, so harvest is less than expected,” said Abramova.

According to her, currently in the Republic collected 95% of winter grain is 393,5 thousand tons. “The yield is 47.3 t/ha, an average of approximately 5 kg/ha less than last year, the reasons are the same – flooding and hail,” said Abramova, noting that “food security of the Republic of reduction in grain yield did not threaten, 600 thousand tons exceeds the internal needs of the region’s grain”.