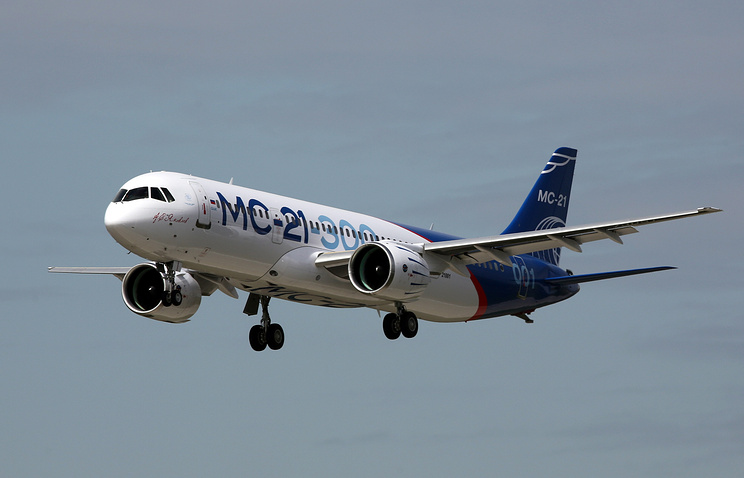 MOSCOW, July 26. /TASS/. Developer and manufacturer of advanced Russian aircraft MS-21 “Irkut Corporation plans to start serial production of MS-21 at the end of 2017. About TASS reported the press service of “Irkut”.

“At the end of 2017 will begin production of various parts for the next five production aircraft MS-21, – said TASS, the official representative of “Corporation “Irkut”. In 2018 it is planned to finish production of flight copies and to continue the production of serial aircraft.”

As explained TASS in the press service of the Corporation, now one aircraft is undergoing flight tests, the second is in TSAGI (Central Aerohydrodynamic Institute. Zhukovsky – approx. TASS) for the static tests. The glider is fully docked a third prototype aircraft is the Assembly of the fuselage of the fourth prototype aircraft and parts manufacturing for the fifth.

Despite the fact that the plane just getting ready for serial production, already seen the interest of Russian airlines to it. So, in 2010, the number of leasing companies had entered into firm contracts and framework agreements for the supply of aircraft “Ilyushin Finans” – 50 aircraft (the contract), “Asiacapital service” in interests “Aeroflot” – 50 aircraft (fixed contract), “Sberbank leasing” – 20 aircraft, VEB-leasing 30 aircraft.

Also at the recent MAKS-2017 it became known that out of 50 MS-21 aircraft “Ilyushin Finans” (IFK) has contracted for 37 aircraft. A firm contract for 16 aircraft was signed between “Ilyushin Finance” and the Russian airline Red Wings (delivery is planned for 2019-2022 years). The company also has 21 IFC signed a framework agreement: agreement on the conditions of transmission on operating lease 15 MS-21 aircraft of the airline “Vim-Avia” and agreement on the terms of transfer of operating lease six aircraft “Saratov airlines”.

It also became known that IFK can conclude with “Irkut Corporation” supplementary contract to buy another 15 aircraft MS-21. Earlier it became known that Azal Airlines plans to lease 10 aircraft MS-21 (to Finance the export will also IFK), to sign a firm contract, the parties may until the end of 2017. Also “Irkut” has recently signed an agreement on cooperation with the Irkutsk airline “Angara” for the purchase of three aircraft MS-21.

According to Slyusar, UAC’s plans for the first time to demonstrate MS-21 at the exhibition in Dubai in the fall of 2017.