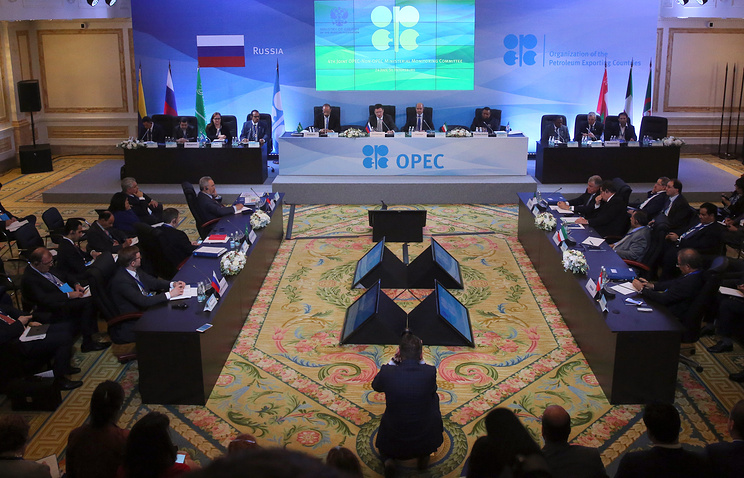 At the end in St.-Petersburg the meeting of the Ministerial monitoring Committee of OPEC decided to extend the current agreement on the reduction of oil production for the period after March 2018. Interviewed by TASS, the experts positively assess the outcome of agreement: restriction of production allows to maintain stable prices for raw materials and supports the economy as a whole.

At the end of 2016 11 OPEC and independent exporters of oil, including Russia, signed an agreement on production cuts. It was assumed that the participants in the first half of 2017 had to withdraw from the oil market of 1.8 million barrels per day compared to October 2016. The purpose of the agreement is to reduce global oil reserves to the averages for the five years levels.

“The country showed an unprecedented high level of discipline and level of compliance, which for six months is at a level close to 100%, and in some countries exceeds 100%”, — said the head of the Ministry of energy Alexander Novak at the meeting of the monitoring Committee. In the end, according to Novak, the deal is OPEC+ for the six months removed from the market of 350 million barrels of oil supply.

The agreement has led to the fact that for the first time in three years the world has witnessed the reduction of oil and petroleum products. Also reduced inventories in floating storage. For the first time in 2014, global investments in the sector have ceased to decline and has moved to growth.

Commercial oil stocks in developed countries fell by 90 million barrels, and currently exceeds the target of 250 million barrels instead of the 340 million in January of this year, said Saudi Minister of energy President of the OPEC conference, Khaled al-Faleh.

Libya and Nigeria are now exempt from commitments to reduce production. They assured the Ministers of the monitoring Committee that their production will not rise above the target levels. For Nigeria they make up 1.8 million barrels, and Libya — 1.25 million barrels per day.

Nigeria even promised not to go beyond this limit until the end of the agreement, i.e. until March 2018, told reporters OPEC Secretary General Mohammed Barkindo.

Exports will be limited

However, talking about the situation in Libya and Nigeria at the St. Petersburg meeting was not the most significant. Consolidated for the first time, the Ministers acknowledged that to achieve the objectives of OPEC+ reduction of surplus in the oil market will need to monitor not only production but also exports.

“We want to bring the stocks to a normal level, and for that you need to see what kind of supplies to replenish these stocks. The export must be one of the indicators (reported in the monitoring along with the extraction — approx. TASS),” said al-Faleh, answering the question TASS.

“We asked technomate to develop a mechanism for excluding exports to the monthly monitoring”, — he added.

A pioneer in the business of export restrictions is ready to be Saudi Arabia. According to al-Faleh, the country plans to limit in August 2017 oil exports by 6.6 million barrels, production in the country for six months was below 10 million barrels per day.

The Ministerial Committee recommended that the Alliance members to consider the extension of the deal after March, 2018, when existing arrangements expire. The reason — the growth of production in Nigeria and Libya and in the United States.

The benefit to Russia

“The decision of OPEC profitable for Russia, because Russia does not have many opportunities to increase oil production”, — explained TASS economist FK “URALSIB” Alexei Devyatov. Old Russian deposits are gradually depleted, and the new one is quite expensive: their development requires large investments. So in the coming years, production in Russia will not grow.

“On the one hand, we lose nothing, because you want to freeze production at maximum levels for us, — says the ninth. On the other hand, the number of countries that have opportunities to increase production, such as Saudi Arabia, restrict what supports the prices of raw materials and increase our revenue.” Prices are expected to remain at the level of 50-60 rubles per barrel “is also very good,” said the expert. “It supports our economy and contributes to the replenishment of the budget”, — he added.

“For the Russian economy what is important is not the level of prices and their stability, — said in an interview with TASS Director for analysis of financial markets and macroeconomics UK “Alfa-capital” Vladimir Bragin. We have a large margin of safety on reserves, a floating exchange rate and no problems with payment balance. Therefore, the agreement for the Russian Federation is more beneficial”.

The agreement allows OPEC to keep prices at a reasonable level. “To tighten restrictions makes no sense, says Bragin. This can lead to an increase in oil prices, if they rise sharply, other countries that are not included in this agreement, will be glad to fill in the dropped prey.” On the other hand, the rejection of this agreement, the additional supply of raw material on the market, which can lead to a drop in prices that is unprofitable.