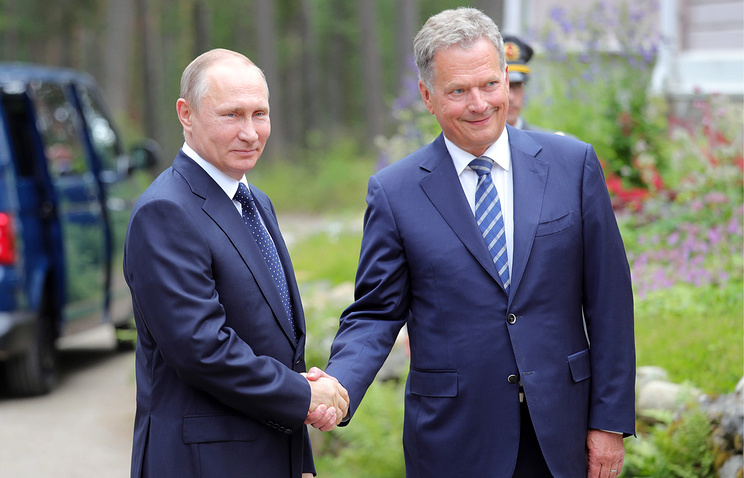 SAVONLINNA /Finland/, July 27. /TASS/. Russian President Vladimir Putin arrived in the Finnish town of Savonlinna, where he will hold talks with President of Finland Sauli Niinistö. The heads of state will discuss issues of cooperation in trade-economic, cultural, humanitarian and environmental spheres, and also will exchange opinions on urgent regional and international problems, reported the press service of the Kremlin.

“I want to thank you, Mr President, for the invitation. We are celebrating the centenary of the independence of Finland. In the framework of the centennial anniversary we have a whole set of actions of cultural-historical character,” Putin said before the talks.

The Russian President especially noted the opportunity along with Niinistö to attend on Thursday the Opera “Iolanta” at the Bolshoi theatre.

In turn, the Finnish President said that it is pleasure and honor to receive the Russian President. “Finland appreciates your visit, what you came here to celebrate the centenary. Do you have the great honor of your visit, welcome”, – said the President of Finland.

It is planned that after talks, the two leaders will hold a joint press conference.

After that, Putin and Niinisto on the Museum ship “Saimaa” will go to the Olavinlinna castle, where they will participate in the reception on behalf of the Chairman of the Board of commissioners of the city of Savonlinna.

Then the two leaders together to watch the Opera “Iolanta”. At the end of the day Putin and Niinistö is scheduled for informal conversation.

Putin visits Finland at the invitation of the President of Finland. The visit is timed to the celebration of the 100th anniversary of the state independence of the Republic.

The history of independence of Finland

6 December 1917 the Finnish Parliament adopted the decision to declare Suomi independent. The Council of people’s Commissars of the RSFSR recognized the independence of the country on 31 December of the same year. Finland, examined several plans of the new government, including the possibility of establishing their own monarchy, chose the Republican path of development and followed it until now. In 1809 the country was part of the Russian Empire as the Grand Duchy of Finland.

In the Republic on the occasion of the centenary of independence this year held many different activities. The motto and the main theme of the jubilee year, the word “Together”. According to a survey conducted by the national Center for statistics, 92% of Finns are confident that the joint work of all Finns will be one of the main factors of success of the Republic in the future.