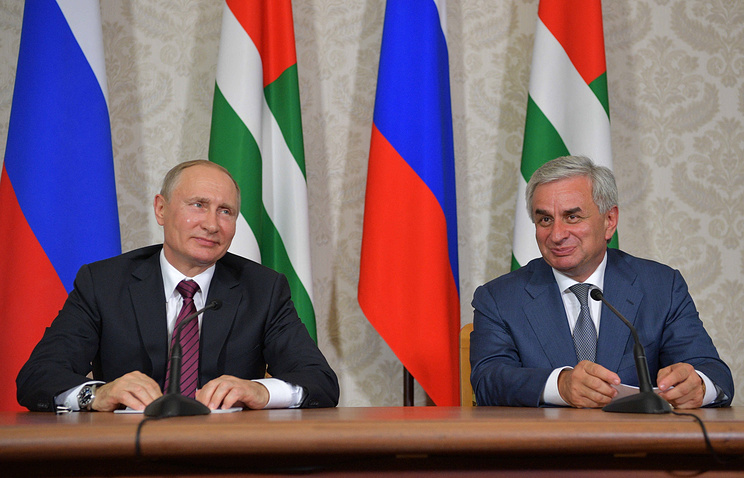 PITSUNDA, August 8. /TASS/. The President of Abkhazia Raul Khajimba at the end of the talks with Russian President Vladimir Putin said that Russia has a lot of financial assistance to Abkhazia, which enables you to implement important infrastructure projects and to develop the economy.

According to Khajimba, the current year funding in the framework of the investment program will exceed 2.5 billion rubles.

“The Abkhaz side to prepare quality project documentation that was reviewed, we received confirmation that gave the opportunity to begin concrete work on objects stipulated by the investment program. Programs are being implemented in the sphere of small and average business with attraction of credit resources of Russian banks. For this purpose line investment Agency granted 1.2 billion rubles”, – said Khajimba.

“Through this programme in Abkhazia began to develop a number of industries, primarily in the field of agriculture, which gives hope for the development of its own economy in the nearest future”, – said the President of Abkhazia.

According to him, in General, in the course of the talks, “noted the positive dynamics of implementation of the Abkhaz-Russian Agreement on Alliance and strategic partnership”.

“So, in anticipation of our meeting, the Abkhaz side ratified the Agreement on procedure of formation and activities of joint Information and coordination centre of the bodies of internal Affairs of Abkhazia and Russia. We hope that the new body will be a serious and effective tool to help resolve issues in the field of combating crime, improving the crime situation in the country”, – said the head of the Republic.

He added that work continues on the creation of a single contour of defence and security. “For this purpose provides for the formation of the joint group of the Armed forces of Abkhazia and Russia that are regulated by a separate agreement,” said the Abkhaz leader.

The export of agricultural products

Khajimba said that he had asked the Russian government to ease the conditions for the Abkhaz export of agricultural products in Russia. “The issues we previously discussed in our meetings with the President of the Russian Federation, find the solution for the benefit of our citizens. In particular, the issues of creation of more comfortable conditions of crossing the state border. We can say increasing the speed and efficiency of border and customs procedures, a significant reduction in waiting time of citizens at checkpoints. In this regard, we are interested and request them to the Russian leadership – in the maximum facilitation for the Abkhaz export of agricultural products to the Russian Federation”, – he said.

According to the Abkhazian leader, for faster and more efficient customs clearance and implementation of various types of state control, including phytosanitary control, “it is necessary to use already existing mechanisms, in particular under a number of agreements in customs sphere”.

“This will help the development of the agricultural sector of Abkhazia and will allow a larger volume to supply Russian consumers with quality, environmentally friendly products Abkhazian farmers,” – said Khajimba.

He thanked the Russian President for his “unwavering support of the Republic of Abkhazia, for sensitive and attentive” to her problems. “Our people are truly grateful for it. The Republic of Abkhazia was, is and will be a reliable ally and friend of Russia” , – he said. Khajimba sure that “fruitful Abkhaz-Russian cooperation, based on principles of Alliance and strategic partnership will continue to develop for the benefit of” the peoples of Russia and Abkhazia.

A friendly and constructive atmosphere

This meeting, according to the President of Abkhazia, traditionally held in a friendly and constructive atmosphere, was extremely useful from the point of view of the common interests of the two countries. “Our meetings are regular, which testifies to the privileged character of Russian – Abkhaz relations, strong relations of Alliance and strategic partnership,” – Khajimba said.

“We discussed all the most important issues on the bilateral agenda, primarily the issues of socio-economic development of Abkhazia”, – said the Abkhaz leader.