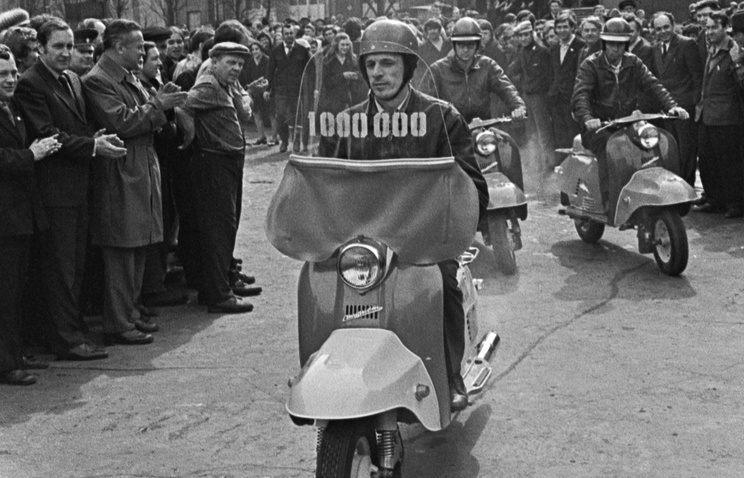 Bicycle, motorcycle, sewing machine, these products are considered attributes of the welfare of the Soviet people in the postwar years. In the late 1950-ies they became available to large part of the population. They can be bought on credit after the Council of Ministers of the USSR of 12 August 1959, signed resolution No. 915 “On the sale of the workers and employees on credit of durable goods”. This day is considered the beginning of the era of consumer lending.

Needs ahead of earnings

In the postwar period the standard of living of the Soviet people was annually increased.

“Actively practiced the sale of goods in installments, that too is actually a loan, — says Nikolaev. Not had somewhere to take the money, bring them to the store and pay for the goods. When buying processed installment, and then subtracted from your paycheck money.”

Paying money only a quarter of the cost, you could buy the product. The remaining amount can be paid trade organization gradually. Annual installments at a cost of 2% of the retail price of a product, half-yearly 1% of the overpayment, and if the person was planning to pay for 9 months, the value of the goods for him increased by 1.5%.

That could be bought in installments in 1959? Bike, radiogram and radio, scooter “Tula” and “Kirov”, motorcycles M-1M and K-58, outboard motor “Moscow”, sewing machine “Tula” wrist watch in a metal housing, clothes from wool and silk fabrics (e.g., suits, coats), the camera cost from 400 rubles, a hunting rifle is more expensive 700 rubles.

All of these products are expensive. For example, the cost of a hunting rifle comparable to the average wage, which, according to Rosstat, was then 693 rubles a month. A worker received an average of 893 of the ruble, the seller — 593 ruble, teacher — 724 ruble and researcher — 1106 roubles.

Use the installment plan could work, servants, military personnel, graduate students and retirees. They had to meet the minimum requirements, for example, to live in the community where the store, and prove that they have some income.

“The installments for a product to use when providing help with work, — says Sergey Smirnov. — In Soviet period people were tied to the place of work, and he had to look respectable — working, not alcoholic, positive”.

The new loan could take only paying off the same. The man could not be more than one loan simultaneously.

Statistics show that people actively used the installment plan. In 1961-1971 years in the USSR the volume of sales of goods to the population on credit has grown almost 3.4 times and amounted in 1971 to $ 3.8 billion.

“The demand for goods in installments was, although the loan for a long time it seemed unusual for the vast majority of the Soviet people, — confirms Sergey Smirnov. — Large demand for loans for housing, which the government offered in a very loyal environment.”

Indeed, in Soviet times, was the equivalent of a modern mortgage.

The loan was received only depositors of savings banks and only for up to two years. Maximum loan amount — 1,000 rubles, but it was not to exceed a four-month earnings of the borrower. Guarantee the repayment of the loan was the borrower’s account in a savings Bank, where he had to keep at least 25% of the loan amount. It is noteworthy that the borrower does not receive loan funds in his hands. The savings Bank gave the man a check for the estimated amount of the loan. That check could buy goods permitted for trade in credit.

A small amount you can take without letting the state know. “For microfinance existed mutual Fund, — said Sergey Smirnov. — They were created at the place of work of citizens. People agreed and contributed a certain amount to this Fund, and then could take the money there”. They returned without interest. “Mutual Fund was created with trade Union committees, trade unions are partly responsible for their activities, although no hovering over her, there was not, — said Smirnov. — The money was not surrendered to the Bank, and, as a rule, lay in the safe.”

In addition, to take out a small secured loan valuable property can be had in pawnshops and in some public organisations, for example, funds of the creative unions.

Strictly speaking, in 1920-30-e years, in the NEP period, Soviet citizens were also permitted to use consumer credit. But most of these were loans, not on durable goods and daily needs. For example, a cooperative organization of the workers gave melkosopochny credit for food and necessities. The term of such loan does not exceed one month, and the size — half the salary. The payment of the debt was deducted by the employer from the salary and transferred to the creditor. Loan size to one and a half monthly salaries could be obtained only shareholders of the cooperative for a period of up to six months.

These types of loans were in great demand. For example, in the spring of 1924 by a loan from the cooperatives for a period of 3-6 months used 8 million people.

In 1920-e years, the government actively issued loans at 1% per annum for the construction of housing and repair of houses. Was installed different loan period for houses of different materials. The mortgage on the home stone was given 60 years, and for buildings of wood — 45 years.

Consumer lending was curtailed in the early 1930-ies — immediately after the abandonment of the NEP. In 1940-e years the government preferred to grant loans to citizens only for the construction of housing.

Consumer credits are in demand

The Soviet system lasted until the beginning of 1990-ies. The country has changed — changed and the banking system. There are many commercial banks were willing to lend to the public for purchase of any goods. Having lived through a shortage, people began to actively consume, buying on credit the necessary items.

Loans are in demand now. So, in 2016, according to the Higher school of economy, loans were more than a third of Russian households. Half of them had paid the mortgage debt, and a quarter is calculated on consumer loans.

The number of consumer loans is growing, according to National Bureau of credit histories. In the first half of 2017 was issued patrissimo of 7.12 million, 28.9% more than in the same period last year. The volume of such loans amounted to 986,2 billion.

What kind of loans are interested in the Russians now? According to the search system “Yandex”, from August 8, 2016 August 6, 2017 users who type the words “loan” and “loans” most often searched for information on cash loans.