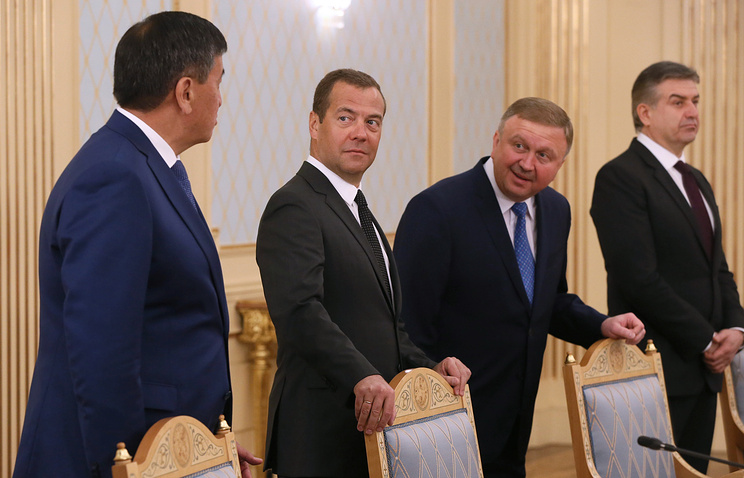 ASTANA, August 14. /TASS/. The priorities of the Russian Federation in the Eurasian economic community in 2018 will become the investment climate, support of export and international cooperation, said Prime Minister of Russia Dmitry Medvedev at the session of the Eurasian intergovernmental Council.

“During our presidency we plan to devote attention to both the current topics, including the notorious exceptions and limitations, and strategic objectives for the future in areas such as export support, investment climate, labor standards, innovation agenda, cooperation with international partners,” he said.

The head of the Cabinet reminded that the chairmanship of the Union will go to Russia in 2018. He stated that in recent years, the EurAsEC has already done considerable work in the legal field.

The Prime Minister added that he plans to visit held in Astana exhibition “EXPO-2017”. “Holding such a prestigious international event is a demonstration of great achievements and new opportunities of Kazakhstan, – said Medvedev. – I am sure that Astana will successfully cope with this mission.”

The growth of trade volume

Medvedev believes that the EurAsEC countries have managed to achieve good results in 2017. “The economic statistics that we have, talks about the specific results of our joint work, and these results are good,” he said.

According to him, the volume of internal and external trade of the countries of the Union for the first four months of 2017 have increased by more than a quarter, while export volume increased by about 10%. Also improves product structure: declining share of energy products. To build on this momentum Medvedev urged to improve the rules for business and to eliminate barriers to the movement of goods and services.

The Prime Minister added that the agenda includes issues related to the creation of a single digital space of the Union. He noted that in Russia programme for the development of the digital economy has already been approved, but similar processes should also be conducted in other countries of the Union. Medvedev also expressed hope for the completion of the domestic procedures for the agreement on the establishment of a mechanism of traceability of products.

According to Medvedev, the meeting discussed social issues, including those associated with guarantees and pensions. “Further work is needed in order to withdraw finally on the future agreement on pension provision”, – he said. The Prime Minister added that on 14 August it is planned to adopt the document, which will allow to equalize the rates for flying and maintenance of airports.

The Prime Minister noted the importance of the community’s cooperation with other unions, including the CIS. He also pointed to the need to build partnerships, including creating a free trade area with other countries.

Adjournment of the meeting

The Prime Minister also asked to postpone the next meeting of the Eurasian intergovernmental Council from the 30th of October 24 or October 25, 2017.

“We are, when in the narrow part discussed, another date agreed on. I just paid attention of colleagues that we – the Russian side is very tight on trips in all sorts of different places. Therefore, until this proposed date is October 24-25, so I would ask that you consider these dates,” he said.

“Because on 30 and 31 October this outside,” – said Medvedev on the proposal of the Prime Minister of the Kyrgyz Republic of Sooronbay Zheenbekov to hold a meeting of the intergovernmental Council of the EurAsEC on October 30 in Yerevan.