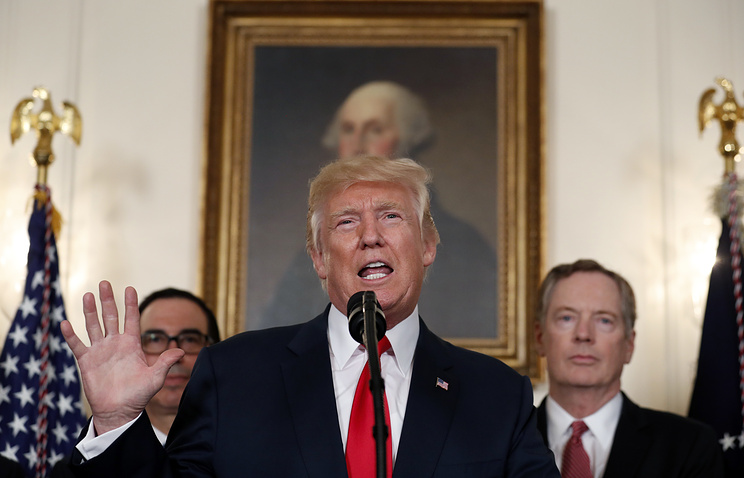 WASHINGTON, August 14. /TASS/. The President of the United States Donald trump signed a Memorandum which directs the United States representative for trade negotiations Robert Leitheiser to decide whether or not to initiate an investigation into alleged violations by China of intellectual property rights of U.S. companies. Trump signed a document at the White house in the presence of the trade Minister of Wilbur Ross, Minister of Finance Stephen Mnuchin and other members of the administration.

“I give you the authority to consider any possible options available at your disposal, – said the head of state to Leithauser. We will protect copyrights, patents, know-how and other intellectual property as important to our security and our prosperity.” “This is a very big step,” added trump.

On Saturday, the representative of the administration explained the essence of this step of the White house. If Leithauser deems necessary to conduct investigations concerning trade practices of China, it will be in a position to initiate such proceedings, which may last up to a year. The result may be the imposition of certain restrictions against China, discussion of possible compensation in the United States or the elimination of any trading or barrier practice.

“Unfair trade practices and industrial policies of China, including technology transfer and theft of intellectual property, causing damage to the American economy and labor force. American companies are required to establish joint ventures with Chinese companies if they want to work in China. It’s not fair,” – said the representative of the administration.

As of 1 August, the newspaper the New York Times, the administration of the tramp produced a number of trade measures against China for its violation of intellectual property rights and limit the activities of American companies on its territory. According to the publication, the President departs from the original course to strengthen cooperation with Beijing because of dissatisfaction with the passivity of the PRC nuclear program of the DPRK.