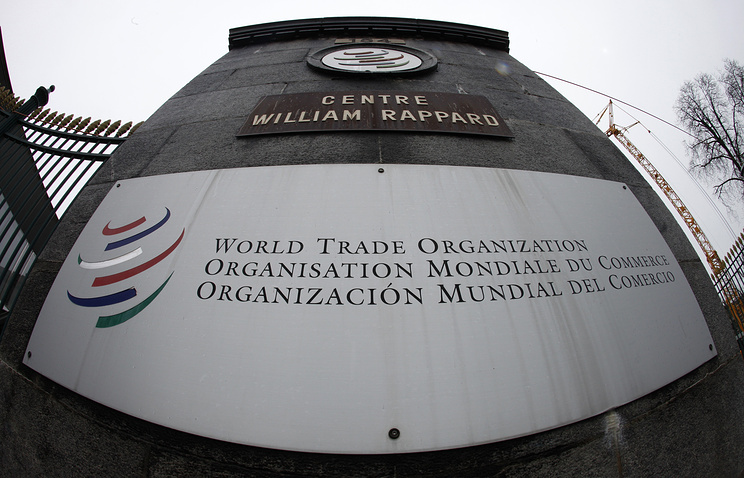 MOSCOW, August 22. /Offset. TASS Anna Dementieva/. Exactly five years ago, after 18 years of negotiations, Russia finally joined the world trade organization (WTO). Then it caused a lot of controversy and a barrage of criticism, but now we can say that the WTO is better than outside it, said the Director of the Department of trade negotiations Ministry of economic development Maxim Medvedkov, who for many years headed the Russian delegation at negotiations on accession to this international organization.

The WTO is a specialized Agency of the United Nations, the main objectives of which are the liberalization of world trade, ensuring fair conditions for competition, removal of trade barriers. It carries out the development and implementation of new agreements in the field of world trade, as well as supervision of their execution.

Country wishing to join the WTO, is obliged to bring its legislation into conformity with the requirements of the organization. The negotiations on the accession of the new member is conducted by the working group, which includes States with unresolved issues in trade with the candidate country. The process is conducted in four areas: market access of goods, on trade in agricultural products, market access services and on systemic issues. Now the organization includes 164 countries.

“Imagine if we woke up outside the WTO – and the first thing probably want to do is the fact that the WTO prohibits. For example, to raise tariffs to prohibitive levels or to distribute subsidies to all interested companies,” – said Medvedkov in an interview with the reporter. TASS. At present, Russia has no sufficient means to widespread subsidies, and duties will not lift, as the members of EurAsEC obligations under the duties in the WTO, retain and change their not going to, said Medvedkov.

Behave by the rules and want other countries, he said. “Many countries would be happy to impose additional restrictions on the importation of our products. We really want to give them the opportunity? There are many other arguments for why the WTO is better than without the WTO”, – said the Director of the Department of economic development.

Representatives of the Ministry of economic development has repeatedly stressed that the world trade organization is the only and so far the only regulator of world trade, and it continues to create rules of global trade, while remaining an important arm of protection against discrimination and other ways of infringement of trading rights.

Before joining the WTO, the Russian experts carefully studied all the rules and procedures, analyzed the direction of the fulfillment of the conditions of membership, the government adopted the action plan for the neutralization of negative consequences for individual industries. For this reason, no surprises, neither good nor bad for five years of membership in this organization did not happen.

“It was pretty predictable. According to tradition, prepared for the worst, but the worst did not happen”, – said Medvedkov.

So, in 2013 Russia signed an Agreement on information technology (Information Technology Agreement; adopted in 1996, entered into force in 1997 – approx. ed.). It provides for a gradual reduction and elimination of customs tariffs on the products from this sector. In April 2016, the Russian Federation ratified the Agreement on simplification of trade procedures (Trade Facilitation Agreement; adopted in December 2013, entered into force February 22, 2017 – approx. ed.), aimed at reducing administrative barriers in customs clearance of goods.

Criticism that have befallen the government, and pessimistic forecasts about the difficulties for Russian manufacturers fell silent after 1.5-2 years after Russia’s accession to the WTO. According to experts of Ministry of economic development in the unqualified winners are the agro-industrial complex (AIC). In the process of negotiations were able to maintain a sufficiently high level of protection, a positive role was played by the changing structure of state agriculture.

The government’s plan for the adaptation of other sectors of economy to the WTO membership, which began to be implemented before the official date of entry into the organization was also largely fulfilled. Plus depreciation of the ruble has dramatically increased the level of effective protection in the market. It was assumed that the results of Russia’s accession to the WTO will emerge by 2016, However, adequately assess them do not allow introduced in 2014, the anti-Russian sanctions and countermeasures Russia.

After the introduction of sanctions, the Russian authorities have repeatedly stated that he would use one of the benefits of WTO accession – opportunity for the country to defend its interests in the framework of the mechanism for dispute resolution, and will submit a claim against the United States and the EU. However, experts always skeptical of such measures, Recalling also that, even if sanctions contradict the WTO norms, a country can always refer to the exception to these rules: the country has the right to derogate from the WTO agreements, if their implementation threatens national security. In addition, cases in the WTO sometimes take years.

Nevertheless, Russia in may this year, sent to the dispute settlement body of the WTO request for consultations in connection with the continuous implementation by Ukraine of sanctions against Russia. In July, passed the first consultations of the countries on this claim. In accordance with WTO procedures should be conducted in consultation with the Ukrainian government to find a mutually acceptable solution of the situation. If consultations do not yield the expected result, Russia can start the second stage of the dispute – transfer of cases to the arbitration panel.

Despite the numerous advantages of the existence of the WTO in the international trading system, in recent times the organization is seen as inefficient. The decision-making process takes several years that the demands of the modern world, according to critics of the WTO.

The head of the Ministry Maxim Oreshkin also recognizes that the WTO is not perfect and in need of modernization, however, alternatives for it does not exist. “We can’t pretend that the WTO system is beautiful and needs no optimization. However, we have no alternatives to the WTO. WTO is a unique international organization with its global trade rules that guarantees a level playing field for all its participants,” he said earlier at the seventh meeting of trade Ministers of the BRICS, which called for the Alliance partners to jointly promote the interests of the organization.

The Minister stressed that the United States “strongly support” the General principles of the WTO as a multilateral organization that determines the shape of world trade, accompanied by the removal of restrictions and barriers, the movement to free trade.

According to Oreshkin, in the interests of the BRICS to support the Central role of the WTO in the world economy and international trade. The fact that the existing protectionist tendencies, which are applied by certain WTO members unilaterally, is not conducive to the stability of the multilateral trading system. Preparing for the G20 summit in Hamburg has shown that some countries departed from the international rules of the WTO and went on to approach “I do what I want,” said Oreshkin.