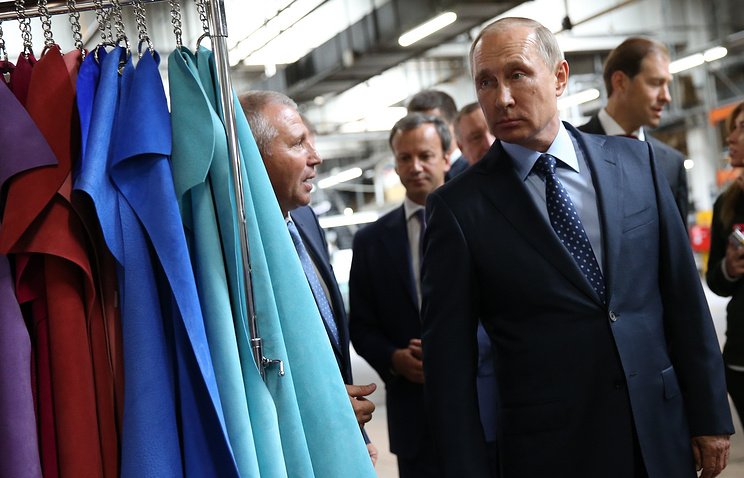 RYAZAN. August 24. /TASS/. Russian President Vladimir Putin during a visit to the Ryazan tannery belonging to the group of companies “Russkaya Kozha”, talked with staff and praised the quality of manufactured products.

“Good production, and, importantly, that the products are very good” – shared his opinion of the President after an inspection of the production facility. He noted that currently the Ryazan tannery became the largest company in the industry in Europe. “I hope that the wages will grow”, – he said.

Accompanying the head of state, Chairman of the Board of Directors of JSC “Russian leather” Igor Surin said that the salary of workers is regularly adjusted, in particular, at the end of the current year it is planned to increase by 9%. In addition, according to Surin, employees are provided with social package, which differ for different categories of workers.

Putin drew attention to the large number of young employees at the enterprise.

The President visited production departments of the factory and received the gift of a t-shirt with his own portrait. Plant inspection, Putin began with the dyeing Department, where he talked about raw materials, showed a cloth of leather to tanning, and painting. The President spoke about the production process of velour. Leather the canvas is divided in half, the upper outer layer serves for footwear, furniture, handbags, lower – process and get velour.

The President also showed the shop automotive and aviation leathers, where Putin visited the interior of the car UAZ “Patriot” and new chairs for the Superjet, covered by the plant skin.

After the tour, Putin visited the stand of the Ministry of industry and trade where the representatives of various companies showed the head of state their products – footwear for special forces, uniforms, sports kits, children’s shoes, school clothing. One of the entrepreneurs presented the President with a t-shirt, and promised “at least a hundred of these every day if required.” T-shirt print – portrait of the Russian President in sunglasses. Putin t-shirt took, but never unpacked.

The representative of the company making children’s school uniforms thanked the President and the Ministry of industry and trade. “And then what?” – jokingly asked Putin. A company representative said that the Agency has done much to ensure that producers were able to obtain Russian fabrics for sewing things.

Ryazan tannery was opened in 1916. Today, the company processes natural leather, which is used in a haberdashery, footwear, automotive, furniture and aviation industries. Ryazan plant – a major supplier of comaterials going for needs military-industrial complex, law enforcement agencies and for the production of PPE.

Over the past three years, according to the company, shipped for export about 60% of production with an average production of 8.6 million square metres per year. The plant operates with companies from many countries of Europe and also from China, India, Bangladesh and others. Among the clients of the tannery include manufacturers of footwear, furniture, haberdashery in Russia, CIS and far abroad.