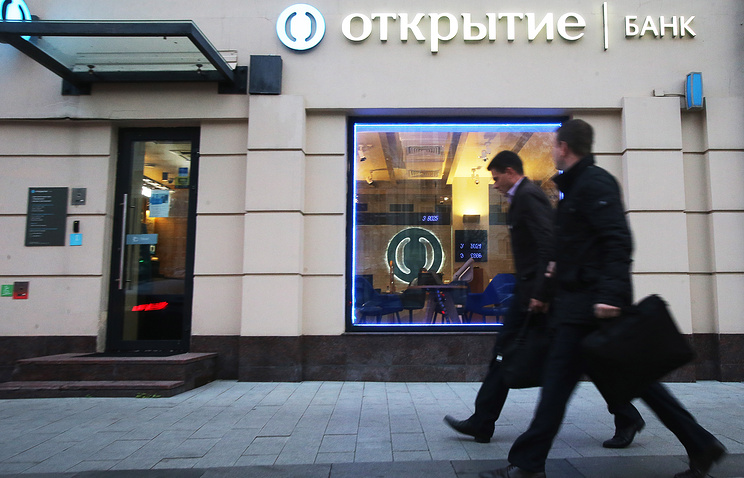 MOSCOW, August 29. /TASS/. The Bank of Russia on Tuesday announced the implementation of measures aimed at improving the financial stability of the Bank “FC Opening”, which occupies the 8th place in the Russian banking system by assets and is included in the list of systemically important credit institutions.

The first Deputy Chairman of the Central Bank Dmitry Tulin told reporters that the regulator has long been aware of the problems at the Bank, the main of which he called the financing an aggressive growth of the credit organization at the expense of borrowed funds.

As a result, according to Tulin, “the owners and management of the Bank are turned to the controller with a request to conduct concerning the Bank’s financial recovery through the Fund’s consolidation of the banking sector”. While the Central Bank assured that customers of the Bank will not feel any negative changes.

“The backbone of the workforce of the Bank, of course, will be saved, the Bank’s customers will be served in a familiar environment at a high quality level, which is characteristic of a competitive market environment,” said Tulin.

As said the first Deputy Chairman of the Central Bank, in recent years a group of “Opening” is very rapidly growing, including through mergers and acquisitions. “This process was financed by borrowed funds and the principal risks assumed by the Bank. The Bank’s capital was insufficient in comparison with the volume of transactions and risk. The capital of the Bank, published in the official reports, apparently, were significantly overstated in comparison with its real value,” said Tulin.

He noted that the activities of the Bank “FC Opening” has been associated with increased risks, the Bank knew long ago: “the fact that the Bank’s activity is connected with high risks and needs serious changes, including the possible application of measures for financial rehabilitation, employees and heads of banking supervision knew for quite a while, at least until my transfer to the Supervisory unit (Thulin moved to this position in the fall of 2016 – approx. ed.)”.

One of the risky investment Bank, he called the funding “Rosgosstrakh” – the largest player in an unprofitable market insurance.

“The owners of the group in December last year, made another large investment decided to purchase the Rosgosstrakh. The Bank, in fact, already before the transaction began funding the ongoing activities of the insurance company. The company at that time had some financial difficulties, so was an easy target for takeover. De facto, the Bank began to Finance its activities through loans,” said Tulin.

However, the actual costs of the Bank for the financing of this activity far exceeded initial expectations of the owners group, the Bank has spent for these purposes a fair amount of liquidity, although this was not for him a fatal step. “But the problem was that they solved the financial problems of “Rosgosstrakh”, but put yourself in a very vulnerable position,” – said the first Deputy Chairman of the Central Bank.

A plan to improve financial stability

According to the Bank, the implementation of measures to enhance financial stability of the Bank “FC Opening” with the use of the Fund the consolidation of the banking sector will last 6 to 8 months, after which the Bank will operate in compliance with all mandatory standards. In this case the regulator will be included in the Bank’s capital as a major shareholder and take over the management of the credit institution.

“The powers of the Executive bodies are suspended and transferred to the interim administration. The work of the Board of Directors and the General meeting of shareholders of the Bank continue, but their decision will enter into force after the agreement with temporary administration”, – stated in the materials of the Central Bank.

In this case the owners of the Bank “FC Opening” will be able to save 25%, if the Central Bank does not reveal a “hole” in the capital.

“By law, the fate of the property rights of existing owners will depend on the assessment of the capital value. The most that they can claim is 25% for all, and the Central Bank – at least 75%. If the capital will be considered equal to zero or take a negative value, then they are completely affected in their property rights to 1 ruble. The Fund consolidation becomes 100% shareholder of the Bank”, – said Tulin.

Positive for the market

The Bank of Russia regards this situation as a positive development for the market. “We see this event (increased financial stability of the Bank “FC Opening” – approx. ed.) as a whole is very positive. This is the first application of the new mechanism of financial recovery of credit institutions, which entered into force in June. The positive development not only for investors, creditors and the Bank itself, but also for the whole banking sector and financial market,” said Tulin.

He stressed that the Central Bank is the most reliable investor in the market.

“We are not talking about some kind of surgery, the cleansing of the financial group or Bank. We are talking in General about continuity in the management and development of the Bank and group with the new owner,” concluded Tulin.