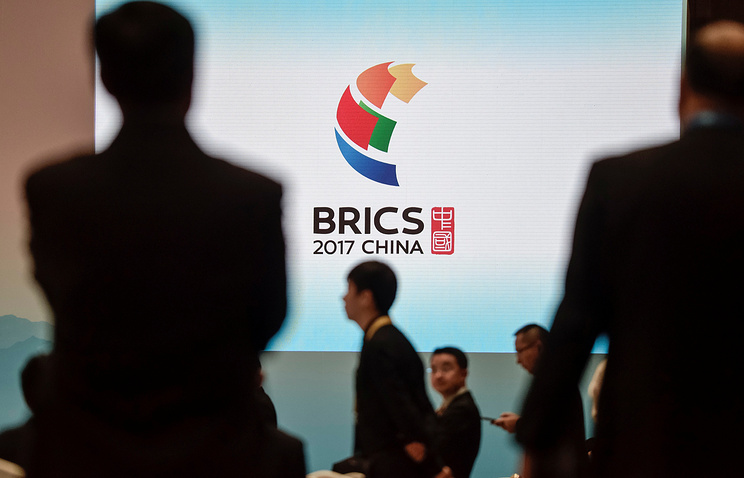 MOSCOW, September 3. /TASS/. The BRICS summit, which will take place on 4-5 September in Xiamen (China) will allow the leaders of Russia, Brazil, India, China and South Africa to discuss topical issues of cooperation on the issues of unification and acute global themes.

One of those is expected to be the situation on the Korean Peninsula. The leaders will pay attention to the security issues, including in the context of anti-terrorist operation in Syria.

However, each of the heads of delegation also hopes to raise issues that are important to his country.

The priority for the Russian delegation issues, Russian President Vladimir Putin wrote in an article for the leading media “BRICS – towards new horizons of strategic partnership”. According to him, “the fight against terrorists in Syria, other countries and regions should be continued.”

“Russia urges not in words but in deeds, to start forming a broad front against terrorism on a generally recognized international legal basis of the Central role of the UN. And in this respect we naturally value the support and assistance from its partners in the BRICS”, – wrote the President.

Putin intends to discuss the situation on the Korean Peninsula. “The expectation is that you can stop the nuclear missile program of the DPRK solely by the pressure on Pyongyang, incorrect and futile. It is necessary to solve the problems of the region through direct dialogue of all interested parties without preconditions. Provocations, pressure, aggressive and insulting rhetoric – a road to nowhere,” he wrote, Recalling developed together with China road map settlement on the Korean Peninsula.

It is assumed that the events of the summit will have a positive impact on the economy of each of the parties, which will be presented at the forum in Xiamen. In particular, as noted by the leading expert of the Center of international economic relations of China Zhang Anshan, China and India in the not so distant future will be able to overcome “the barrier of low income” in these countries will form a solid layer of a wealthy population. It will be an important factor for stimulating growth at the expense of the domestic consumer market, reduce dependence on exports. “The BRICS summit in Xiamen aimed at overcoming differences and convergence between its members for the solution of such a question as the elimination of poverty”, – said the expert.

A specialist from Institute of international trade and economic cooperation under the Ministry of Commerce of China Zhang Jianping believes that the primary task ahead of the BRICS members in the near future is to get rid of fractional imbalances of their combined GDP and trade on global indices.

“Ten years ago the total trade of the countries participating in this format of interaction accounted for 11% of the world total, to date, it increased to 16%. At the same time, their combined GDP has grown from 12 to 23% of the global, i.e. almost by half, – said the expert, citing statistics. – Thus, on the trade rate of equity growth was much lower. This means that at a later stage is extremely important to have a trading and investment factor.”

According to Chinese experts, one of the important topics for discussion at the summit will be increased cooperation between China and Russia in the field of energy and innovation in the implementation of projects in infrastructure and transport. “Thanks to the BRICS significantly increased the scale of energy trade among its members. Similar trends exist in the investment sector,” said Zhang Jianping. He reminded that apart from Russian energy cooperation China actively implements and Brazil.

As for political problems, the experts referred to the situation on the Korean Peninsula. “The main task in solving the problem of the Korean Peninsula is to achieve its ultimate denuclearization,” – said the official representative of Chinese foreign Ministry Hua Chunying. According to her, Moscow and Beijing take on this issue in similar positions, seeking to restore peaceful dialogue between Pyongyang and Seoul.

The Position Of India

For new Delhi, one of the main summit is the issue of relations with China. In recent months they deteriorated sharply because of the situation in the area Gokulam – disputed territory at the intersection of the borders of India, Chinese Tibet, and Bhutan. For the first time in recent years, military and politicians of the two States seriously discussed the possibility of an armed clash.

The decision of the parties to stop the confrontation and to dissolve the army, it was announced shortly before the summit BRICS. This, according to Indian scientists, would seem to indicate that neither new Delhi nor Beijing is not ready to jeopardize the work of the five. That is the upcoming BRICS summit prompted both parties to stop the confrontation and, as expected, the discussion on Gokulam between the leaders of India and China will be held during the summit.

Likely, new Delhi will try at the summit to engage with dispute with China and other participants of the meeting, including Russia. According to Times of India, the Indian side believes that Moscow could help resolve the territorial dispute with China. The newspaper’s sources close to the foreign Ministry noted that the government of India on the eve of the BRICS summit came into contact with the Russian side to discuss the problem. And although India does not count on open support of Russia, but is looking to Moscow with the expectation that she will help convince Beijing to reconsider its antagonistic approach towards India.

According to sources in the foreign Ministry, India also intends to use the meeting of the BRICS to discuss the other disturbing, in particular the development of China’s project “One belt, one road”, which involves the participation of Pakistan and also the problem of the reluctance of Beijing to allow the involvement of new Delhi in the nuclear suppliers Group.

According to the Indian side, the upcoming BRICS summit important for India because new Delhi is going to decide how to treat the BRICS in the future. “(The question is – approx. TASS) turn in the BRICS organization, which is dominated by China, or the voice of other countries will also be heard,” said in an interview with TASS former Ambassador to Russia Ajai Malhotra.

The President of Brazil, Michel Temer will participate in the BRICS summit after his state visit to China on 1-2 September. During this visit, the leader of the largest South American country met with the leadership of the PRC and local entrepreneurs in search of investment in the Brazilian economy. According to the report of the administration of Temer, trade-economic issues will play a significant role during his talks at the summit.

“Temer considers BRICS as a privileged space for economic cooperation, especially in the financial sector. In this respect, Brazil will confirm their commitment to the work of the New development Bank. In the context of BRICS, the President will support the engagement with the private sector of Brazil and other members of the group”, – noted in the press service of the Brazilian leader. The document also stated that the purpose of participation in the meeting is the development of trade relations and attraction of investments.

Attention of Brazil to economic issues caused by financial problems of the Republic. In August, the government of Temer faced with the need to seek new sources of income due to an increase in the budget deficit. Authorities have revised the ceiling for this indicator, and also announced the decision to transfer to private property, 57 state companies and infrastructure in the framework of the new stage of privatization, inviting foreign investors to participate in the project.

According to experts, Brazil in the short term will focus on economic issues, leaving aside the ambitious political projects. “One of the basic principles of Brazilian diplomacy is to not to leave any one unit or one organization, in which it is included. Therefore, we will not see the country out of the BRICS. However, Brazil’s actions in this block from now on, at least until the government is the current government will become less active and are concentrated mainly on commercial and economic subjects”, – says lecturer in international relations at the University of the state of Rio de Janeiro, Williams da Silva gonçalves.

“Brazil will now only be interested in the questions which the liberals called “pragmatic” – that is, those that are limited to the field of economic development. Political themes relating to changes in the world order and international institutions, not be mentioned”, – said the expert in conversation with the correspondent. TASS. According to him, during his stay in power, presidents Luiz inácio Lula da Silva and Dilma Rousseff, the country took a firm position on such global issues as the situation in Syria. “Now on such fundamental topics that opposed the point of view of Russia on the one hand and USA and Western Europe on the other, Brazil will not speak independently, she or abstain, or support the position of the West,” said Gonsalves.

In turn, the lecturer of political science Federal University Fluminense (Rio de Janeiro) Eduardo Rodriguez gómez believes that the summit will be topics that cause disagreements to focus on issues where it is easier to reach an understanding. “The BRICS countries during their talks try not to exacerbate the contradictions, they are in dialogue so that don’t highlight differences, but rather to find points of contact,” he said korr. TASS.

South Africa, which in 2018 is taking over chairmanship in BRICS, believes that this Association helps to develop the economy and expand the circle of foreign partners. This was stated by TASS ahead of the summit senior fellow in the economic diplomacy of the Institute of international relations of the Republic of South Africa Cyril Prinsloo.

“The BRICS group is very important for South Africa. It helps to diversify the economy and achieve its foreign policy goals, including more equitable global governance and the growing role of African countries in international institutions. It also helps to develop the infrastructure,” said he TASS.

From the upcoming China summit Prinsloo waiting for the implementation of previously signed mutually beneficial agreements in the strategic areas of cooperation. In particular, it concerns the idea of creation of a rating Agency group. Earlier this year two leading Western agencies downgraded the sovereign credit rating of South Africa to “junk” status. “The Agency BRICS will not cancel this downgrade, but it may offer a different perspective, based on the factors that adequately reflect the ability to pay the debts,” said Prinsloo.

The good news for South Africa was the decision of the New development Bank of BRICS to open in Johannesburg, the African regional center and to provide $ 1.5 billion investment in the next 18 months. “Significant investment in infrastructure will help to stimulate domestic demand, create jobs and production capacity. This will give a significant impetus to the South African economy”, – the expert believes.

“There are many challenges in relations with the world Bank and the African development Bank, including long-term loan approvals, a big bureaucracy and various conventions. The African regional centre will help the New development Bank to better understand the priorities of African countries,” said Prinsloo.