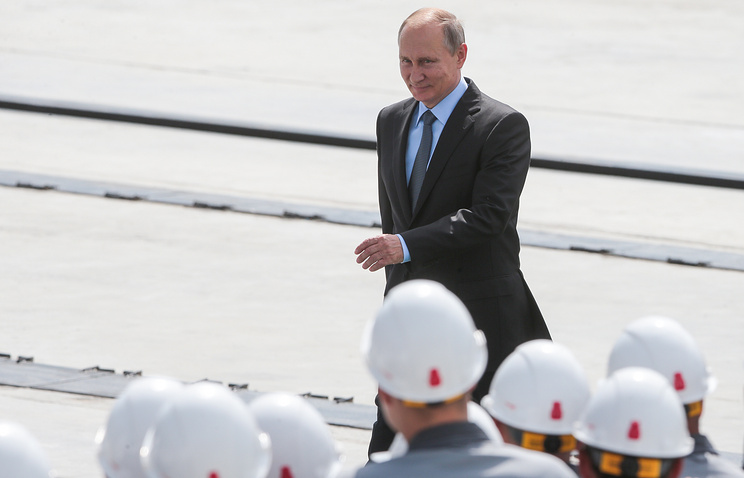 BIG STONE /Primorsky Krai/, September 8. /TASS/. Oil companies need to increase the number of orders for the far Eastern shipyard “Zvezda”, and its potential allows to take the orders. This was stated by the President of Russia Vladimir Putin at the ceremony of laying the multifunctional supply vessels with ice class in the enterprise.

“Now it is crucial to solve the main strategic task – to start producing a full line of medium and large vessels and marine equipment. Already approved perspective plan of the enterprise’s production until 2035. I hope that it will be done, will keep at this because this is one of the key conditions for the successful operation of the enterprise. Not only “Rosneft” and “Gazprom” and “NOVATEK”, our company should implement this plan and advance the time to make these applications and maybe even large applications, because the potential of an overfulfillment of the plan the “Stars” do exist”, – Putin said.

The head of state noted that the shipyard “Star”, “this large-scale project important for the whole country, develops steadily, going forward.” “Almost all works at the enterprise are performed on schedule, the construction of ships and marine equipment”, – he said.

The President stressed that the main customers needs in a timely manner to convey the technical requirements for the production of the required products.

Putin congratulated the employees tab of multifunctional supply vessels with ice class that would be “custom-made “Rosneft” and will strengthen the capacity of the company and all domestic fuel and Energy sector, will contribute to the development of the Northern sea route”. Speaking of the Northern sea route, the President noted that it was “an extremely important project for the whole country and not only – almost all countries in the region are showing interest in him”.

“I am confident that the company team is well aware of the scale and importance of the challenges ahead, will do everything necessary to create a competitive shipbuilding centre, ready to produce the most advanced and popular products. “Star” will surely go down as one of the leading shipyards of Russia and the world”, – concluded Putin.

On the basis of Zvezda shipyard in Bolshoi Kamen 2009 created Russia’s first large-scale shipbuilding shipyard with a refining capacity of 330 thousand tons of steel per year, based on the project launched the priority development areas of the “Big Stone”. In the coming years, there should be Russia’s largest shipyard civil shipbuilding, is able to produce a whole range of medium and large vessels and marine equipment, including tankers, gas carriers, elements of drilling platforms, supply vessels and seismic exploration.

On Friday, Putin took part in the groundbreaking ceremony for the four multipurpose supply vessels. They will be built at a shipbuilding complex “Star” for the company “Rosneft”. Together with the General Director “Stars” Yuri Filchenko and head of “Rosneft” Igor Sechin, Putin has risen on a special platform and fixed a plaque on the base section of one of the vessels. Participants of the ceremony to symbolically tighten the bolts securing the plate. On it is engraved the name – multipurpose supply vessel with ice class “Vladimir Monomakh”, the date and place of Foundation, and serial number and project number.

The remaining three vessels laid down during the ceremony and were named “Alexander Nevsky”, “Catherine the Great” and “Holy Mary”