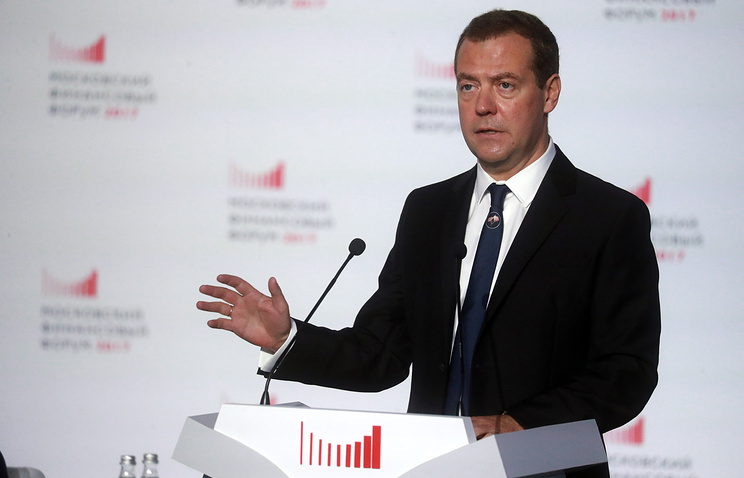 “The goal is to get on the pace of growth, not just comparable with the global average, but higher than average growth rates. And the mechanisms to achieve this goal we have,” he said, speaking at the plenary session “the Financial system of a competitive economy of the XXI century: challenges and solutions”, II Moscow financial forum.

According to him, one of such mechanisms is the maintenance of favorable macroeconomic conditions. It is primarily a record low inflation for Russia of, as well as moderate and gradually decreasing the budget deficit. The basic principle of fiscal policy is to improve the cost structure and implementation of priority projects. All that Medvedev called “fundamental units”.

The head of government noted that the draft budget for the coming three years is almost ready. He promised that he will improve his balance, increasing the resilience will decrease spending reserves. In addition, the government is trying to reduce its dependence on fluctuations in world oil prices. This legislated the new design of budget rules. The Prime Minister also thanked the staff of the Ministry of Finance responsible for the work on the draft budget. “It’s always a very difficult job in any country and in any situation”, – said Medvedev.

The Prime Minister also said that GDP growth in the second quarter accelerated to 2.5%, investments to 6.3%.

“According to preliminary estimates from Rosstat, GDP growth in the II quarter of this year accelerated to 2.5%, when compared to the same period last year, investment has warmed up to 6.3%”, – he said.

Medvedev also stated that recovers and economic dynamics: turnover of foreign trade of Russia, which is not associated with oil and gas, in the first half of 2017 have increased by more than 25%. “These are all obvious signs of a sustained recovery of the Russian economy”, – concluded the Prime Minister.