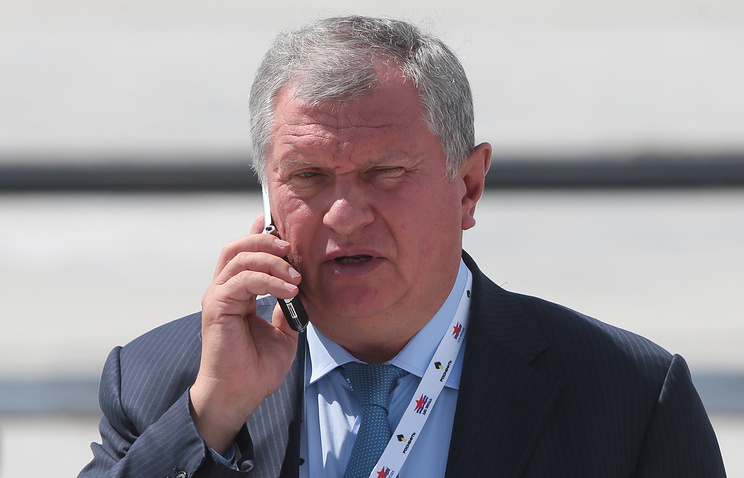 MOSCOW, September 8. /TASS/. Chinese CEFC will buy from the consortium QIA and Glencore 14,16% of shares of “Rosneft”, and also will participate in a number of projects “Rosneft” in Russia, as a minority shareholder, said on Friday the TV channel “Russia 24” the head of the Russian oil company Igor Sechin.

“The basis for negotiations and signing of documents that we made at the BRICS summit, was the acquisition of private power Corporation of China “Huaxin” part of the package of shares of “Rosneft” at the QIA consortium and Glencore,” said he.

According to him, the contract of sale was held by the new shareholder in the amount of 14.2% of shares of “Rosneft” will be the CEFC. For this, companies need to complete the relevant procedures. Shares of “Rosneft” on the news about the impending deal has increased by 3.04% as of 15:35 Moscow time, to 315,3 ruble per share.

According to Sechin, the decision to sell the stake was taken after there was a serious devaluation of the dollar against the Euro. “14.2% of stake was acquired on credit resources provided by the European Bank, – he explained. – The cost of servicing this loan has become quite serious.”

The head of Rosneft noted that the company welcomed a new shareholder in the Chinese company. “For us this is a serious event, which generally forms the final shareholding structure of our company”, – he said.

Sechin said that the deal with the Chinese company was signed documents about their participation in projects in Russia are implemented by the company “Rosneft” as minority shareholders. “First of all we are talking about a series of mining projects in Eastern Siberia. Also addresses the issue of participation in petrochemical projects and others,” he said, noting that it will also continue the cooperation with the traditional partners of “Rosneft” from China.

Rosneft also signed with the CEFC long-term contract for the supply of oil, the volume of future supply were not disclosed.

The Sale Of “Rosneft”

The process of privatization of 19.5% of “Rosneft” in the autumn of 2016, took place in strict secrecy and ended on 7 December visit of the chief Executive officer Igor Sechin to the Kremlin. At a meeting with Russian President Vladimir Putin, the head of the company said that the purchaser of 19.5% of shares of “Rosneft” became the consortium of oil trader Glencore and the Qatari sovereign Fund, contrary to expectations of analysts, which until recently predicted a purchase “Rosneft” the Rosneft. None of the analysts about the configuration of the transaction were not justified: the share of the company bought by foreign investors, the money in the budget was transferred on time and in full – 710,8 billion.

The share in “Rosneft” was sold for €10.2 billion (692 billion), although the government initially set the threshold to the sale of shares in 710,8 billion. Another 18 billion rubles in Rosneftegaz listed as additional dividends. To do this, in preparation for the privatization has changed the dividend policy of Rosneft, have established the norm to pay at least 35% of IFRS net income. In consequence, the dividend policy of Rosneft was again changed, now the target level for the dividend payout is 50% of net profit according to IFRS with the payment of two times per year.