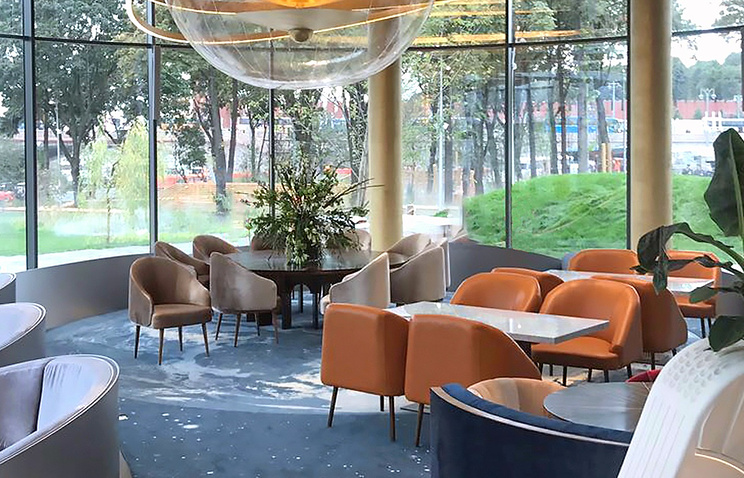 MOSCOW, September 20. /TASS/. A panoramic restaurant overlooking the Moscow river, which will open in Park “Zaryadye” in late September of this year, will be included in the United “Restaurants Rappoport”, owned by capital entrepreneur Alexander Rappaport.

Earlier, the representative of the only restaurant operator Zaryadye Park – the company “Kiev area” (belongs to owners of hotel “Ukraine”, shopping center “European” Year Nisanov and Zarah Iliev) reported by TASS, a panoramic restaurant will be called “Sunrise”, will open on 25 September 2017, and its kitchen will deal with Alexander Rappoport.

“The restaurant is preparing to open, we independently created a concept of interior decoration of the restaurant. The interior embodies the thoughts of a man 60 years of our day – a bit of nostalgia and utopian idyll,” said Rappoport.

According to him, the hotel “Russia” that existed on the site of the Park “Zaryadye”, will resemble a dark blue molded ceiling portion of the interior of the historic restaurant of this hotel.

“The brightest part of the restaurant, perhaps, become spherical chandelier weighing more than 700 kilograms,” said the restaurateur, adding that the menu of the restaurant will be based on the culinary traditions of the unified space of the USSR – “borscht and dumplings, satsivi and pilaf, potato pancakes, and kurnik, beshbarmak and muzhuzhi”.

As reported earlier, the chief architect of Moscow Sergey Kuznetsov, the restaurant will open in the South-Western part of the “Zaryadye”, near the Moskvoretskaya embankment. The building’s unusual facade: the upper part, the roof is a natural walking area of the Park, terrace with a green lawn. And its walls of stained glass Windows from four to six meters.

The Zaryadye Park was opened on September 11, 870th anniversary of Moscow in place of the demolished in 2006, the hotel “Russia”. The Park is named in honor of one of the oldest districts in the centre of Moscow, to the East of the Kremlin, in the southern part of China-town. Property area is 130 thousand square meters.

“Charge” was the first large Park created in the capital over the last 50 years. To the Park postponed four typical Russian landscape zones: forest, tundra, steppe and meadows. They are terraced down from the street to the Varvarka street to the Moscow river. The Park was occupied by the Philharmonic hall, a soaring bridge, the scientific-educational center “Protected the Embassy” topic centre “Ice cave”, an exhibition and cultural complex of the city.