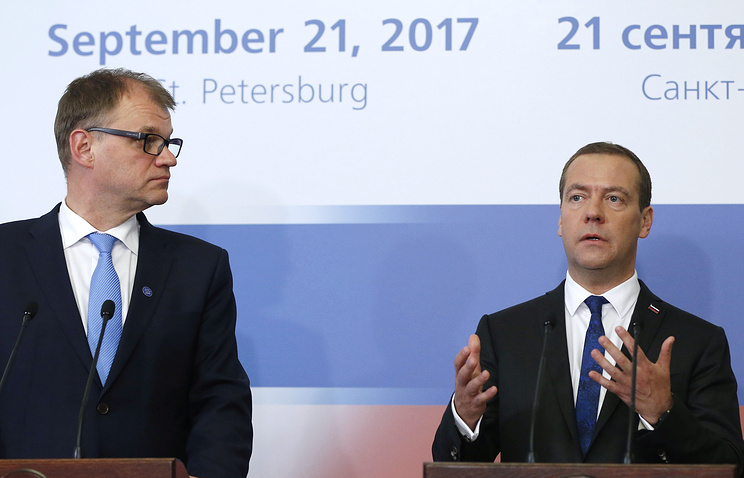 “The most pragmatic is the position of the United States of America, who want to bury this project [“Nord stream – 2″] with all kinds of legal solutions, tools, sanctions, exerting a clear impact on the European Union”, – said the Prime Minister at a press conference after talks with Finnish counterpart Juha Sipilä.

“And, pragmatism is of the highest level, because just the American administration, especially the Congress that such decisions are made, trying to promote their providers and to replace the Russian Federation in this market”, – said the Russian Prime Minister.

“But the decision, of course, accepted by our colleagues from the European Union, the European Commission and individual governments of countries”, – noted the head of government.

The position of the EU project “Northern stream – 2” is unacceptable from the point of view of equal treatment of all investors, Medvedev said.

“Regarding the position of the European Commission, this position is only formulated, but it probably is not as pragmatic as the position of Finland. It is how to really offer Russia to sign a separate agreement on Nord Stream – 2. In our opinion this is unacceptable from the point of view of equal treatment of all investors as the similar projects implemented without agreements on the basis of bilateral agreements,” Medvedev said at a press conference. He noted that negotiations with the European Commission continue.

According to the head of the government of the Russian Federation, Finland is in relation to the project “Northern stream – 2” “a constructive position”.

Medvedev believes that Finland is a very constructive position in relation to the project “Northern stream – 2”, not politicizing it.

“Our partners from the Republic of Finland take a very constructive attitude about the project “Nord stream – 2″. Constructivism this position is that this project related both to normal commercial project,” – said the Prime Minister at a press conference after talks with Finnish counterpart Juha Sipilä. He added that Finland pays special attention to compliance with ecological principles.

“This is exactly what you need in order for this project to take place. Not the politicization of the project, the ideas, and the attitude to it as a commercial project, it’s a business project,” – said Medvedev.