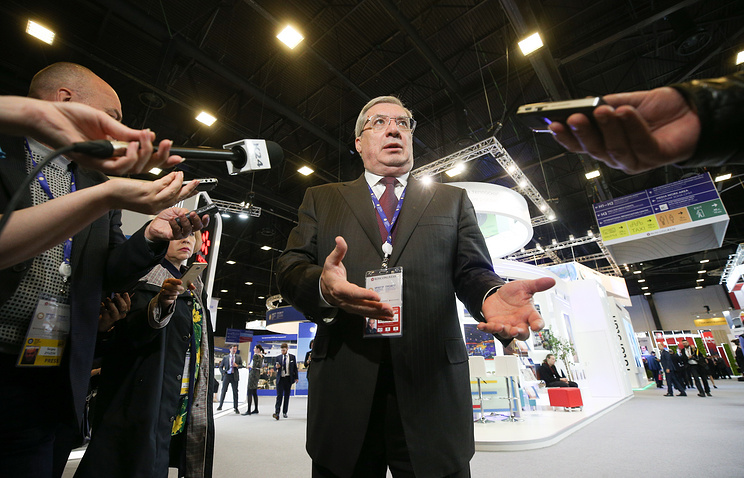 Political career of the 64-year-old Victor Tolokonsky was primarily associated with the Novosibirsk region. Since 1993 he spent seven years headed the administration of Novosibirsk, then moved to the regional government: twice elected to the post of Governor, and after the abolition of direct elections was appointed by presidential decree. At the head of the region Tolokonsky worked for 10 years, and his unexpected transition in 2010 to the post of the Plenipotentiary representative of RF President in the Siberian Federal district, many analysts perceived as a demotion.

Tolokonsky to the post of head of the Novosibirsk region was replaced by Vasily Yurchenko, who stayed in the Governor’s chair not long — in March 2014 he was dismissed with the formulation “in connection with loss of trust of the President.” Experts attribute the failure Yurchenko opposition Tolokonsky, who soon also left his post in may 2014 he became acting Governor of the Krasnoyarsk region.

“It was a coincidence. On the one hand, left the Governor Lev Kuznetsov, it was clear that he will leave Krasnoyarsk. But at the same time, in Novosibirsk there was a conflict between the Ambassador and the Governor. Probably all played to the appointment Tolokonsky,” said TASS political analyst Sergei Komaritsyn.

Tolokonsky won the gubernatorial election in September 2014, gaining 63% of the vote. His closest rival — the Chairman of Committee on Affairs of village and the agroindustrial policy of Legislative Assembly of edge Valery Sergienko then received only 14%.

Novosibirsk politician led the region in crisis 2014. “The region can and should develop at the expense of its own economy”, — he said then, I set the objective to increase the revenues of the consolidated budget of 100 billion rubles for six years. For 2015-2016, this figure rose to 40 billion rubles to 200 billion rubles.

“Credit can safely put the growth of budget revenues of the region — including at the expense of a competent and careful work with major taxpayers. I think the task of increasing the revenue side of the budget 100 billion rubles for six years will not be canceled,” — said TASS Deputy of the state Duma Victor Zubarev.

According to him, in the economic sphere, the edge is softer many regions passed the crisis stage associated with a change in the system of international relations, the sanctions policy. “We were able not only to maintain exports, but also to enter the Asian and European markets of coal, grain. Finally, we have a long-term planning document — Strategy for the period up to 2030. Of course, her project was criticized, but managed to lay the basic position development of the land for three five-year plan,” said Zubarev.

The parameters of the regional budget is largely dependent on world prices for ferrous metals and to a lesser extent, oil. He Tolokonsky has closely followed the prices. “I’m in Novosibirsk, and he has never looked at the quotes. Here I am all the time in these quotes: see the green triangle — happy: go profit. Red triangle down — profits lose”, — he admitted to journalists.

Partly budget revenues managed to increase thanks to the sale of regional property. In 2015, the region over 4 billion sold to Oleg Deripaska’s structures 51% stake in Yemelyanovo airport. The second wave of privatization in 2017 failed: Tolokonsky met resistance from local elites when talking about the sale belonging to the edge of the “Krasnoyarsknefteprodukt” and the remaining stake in the airport. “Of these enterprises “nothing to anyone”, — said one of the most influential politicians of the region, the speaker of regional Parliament Alexander USS.

It was a rare case of open confrontation with the local “Vikings” Tolokonsky.

“It was not his, despite the fact that there was an attempt to replace the concept of “Krasnoyarsk” to “Siberian”. Although external discussion extrude it from the region was not due to the inability of the political elite. However, the problem was, and it was felt even in academic and artistic environment”, — says Sergey Komaritsyn.

A loud outcry caused by the decision of Krasnoyarsk legislators to increase his salary in June 2017. The deputies adopted the law was signed by the Governor and has drawn sharp criticism in the press, after which he had to cancel. According to Krasnoyarsk political scientist Alexander Chernyavsky, if that was the reason, then the resignation Tolokonsky has taken place in the summer.

Reason for leaving the head of the region from his post, according to Cherniavsky, could be the dissatisfaction of the center of preparation to the Universiade 2019. World winter student games will be held in Krasnoyarsk from 2nd to 12th of March. The city will build or rekonstruiruet 34 sports and medical facilities, upgrade urban transport infrastructure. Investments in the preparations for the Universiade are estimated at 60 billion rubles.

During the March visit to Krasnoyarsk, Russian President Vladimir Putin said that 12 of the 34 venues is behind schedule construction. And urged local authorities to prevent this. Then the representatives of the region explained that construction deadlines were moved due to the state examination, and promised to eliminate the backlog.

Between the two cities

Tolokonsky remembered the region for its mobility. He often traveled to areas, could for a couple of days to visit different parts of the region. Such visits by the Governor held in shape by the local authorities. Repeatedly he had been affected by the may fires of the settlements and promised that the victims will get new housing until September 15. However, to enter the shelter in the large village of Strelka in the specified time could not — the building is still.

The head of the region willingly and had a long talk in public and even sang songs. All “Krasnoyarsk” years, he never lost interest in his native Novosibirsk and even participated in local events. For example, in September 2017 at the celebration of the 80th anniversary of the Novosibirsk region, he has performed for the residents song “the Waltz Boston”. Earlier, the Governor struck the team at the library Congress, singing the song “Kiss me good luck.”

According to Victor Zubarev, whoever headed the Krasnoyarsk Krai in the transitional period until new elections, he will be a very difficult task. “This is the completion of the main objects of the region for the Universiade 2019, the 400th anniversary of Yeniseisk, elections of the head of Krasnoyarsk for the next five years,” he said.

On Wednesday, Viktor Tolokonsky announced his resignation from the post of Governor of Krasnoyarsk Krai. It happened at a meeting with government members, deputies and heads of organs of state power in the region. According to the Vice-speaker of the regional Parliament Alexey Kleshko, Tolokonsky said, “I’m leaving. And even leaving.” It was obvious that he was worried. The Governor said that usually says goodbye to his colleagues when had thoughts of a new job, but this time the situation is different. “I did not throw the begun business. Now there is regret that not all projects are implemented to the end. But I was always for updating”, — said Victor Tolokonsky.