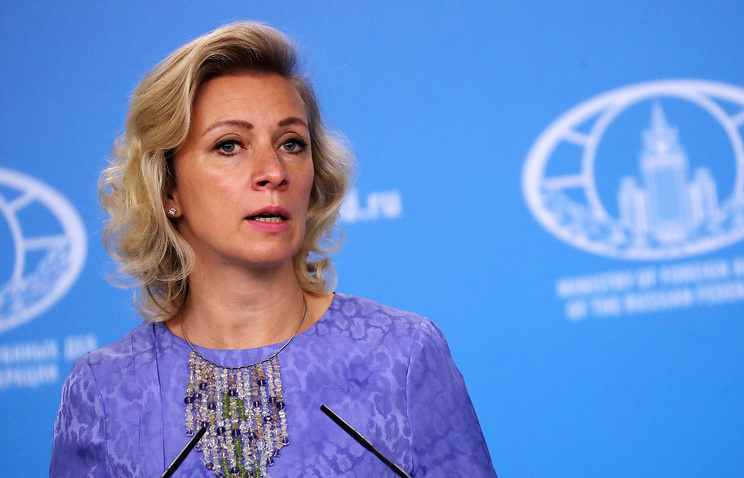 MOSCOW, September 28. /TASS/. Russia urges all governments to take measures for the abolition of amendments to the Ukrainian law on education. This was stated on Thursday at a briefing Director of information and press of the Russian foreign Ministry Maria Zakharova.

“The Ukrainian law on education, signed by the President September 25, violates the fundamental principles enshrined in the UN documents, the OSCE and the Council of Europe and, of course, contradicts Ukraine’s obligations in these international organizations, she said. – We urge all governments to take effective measures with the aim [of the law] cancellation. We believe that the Council on human rights of the UN Advisory Committee on the framework Convention of the Council of Europe Convention on the protection of national minorities, the Committee of experts of the European Charter for regional or minority languages and/or languages of minorities and other relevant international institutions will immediately give an objective evaluation of this legislature, if I may so call it, of the act.”

The official representative of the Russian foreign Ministry drew attention to the fact that the new Ukrainian law violates, in particular, the provisions of Protocol number 1 to the European Convention for the protection of human rights and fundamental freedoms (Article 2), the CE framework Convention on the protection of national minorities (Article 14), European Charter of regional languages and/or languages of minorities (Article 8).

The recommendations of the same structure for the integration of diverse communities from 1992, continued the diplomat, noted that “States must respect the right of persons belonging to minorities to learn their language and/or to receive education in this language”. The right of national minorities to education in their native language was also enshrined in the document of the Copenhagen meeting of the Conference on the human dimension of the CSCE in 1990, and the report of the Geneva CSCE meeting of experts on national minorities 1991. On the international level the importance of the recommendations concerning education, public involvement and issues of language were recognized in the document of the 11th meeting of the Council of foreign Ministers of the OSCE in Maastricht in 2003.

In order not to forget the consequences of total disregard of the rights to cultural identity of their own people, Zakharov advised Kiev officials view the new feature film “Crimea” Director Alexei Pimanova. “The film art, but I think it will be a good help for including of sobering up people who prefer to adopt similar laws, she said. – History has something to teach”.