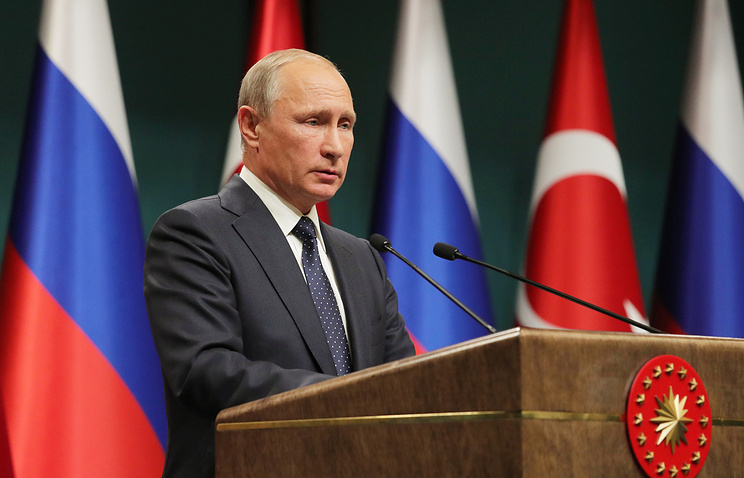 ANKARA, September 28. /TASS/. Russian President Vladimir Putin believes that the creation of zones of de-escalation in Syria was the prelude to the end of the war in this country.

“In fact, the necessary conditions for termination of the fratricidal war in Syria, the final destruction of the terrorists and the Syrians return to civilian life, to their homes”, – told reporters the Russian President following the Russian-Turkish negotiations. Thus Putin has estimated work on creation of zones of de-escalation in Syria.

Putin said that the meeting with Turkish counterpart Recep Tayyip Erdogan, the leaders reaffirmed their readiness to continue work on areas of de-escalation in Syria. “Confirmed its readiness to follow with regard to the middle of September in Astana at the sixth international meeting on Syria final arrangements for four zones of de-escalation, including the biggest one of them in Idlib province,” – said the Russian leader.

He reminded that the initiative on creation of zones of de-escalation in Syria was nominated at a meeting with Erdogan in may in Sochi. “I must admit that the work on realization of this idea was very difficult for involved in the Syrian conflict parties and to the guarantor countries of the process of the Astana – Russia, Turkey, Iran,” – said Putin. However, according to him, “despite the difficulties, we still managed to achieve a positive result.” “I believe these agreements to our common, critical success, success, and our friend, Mr. Erdogan, because he is one of the initiators of this process”, – said the President of the Russian Federation.

According to him, the results of the creation of zones of de-escalation – “absolutely fundamental thing that is important, not only for the Syrian people, not only for the region but for the whole world.” “We create the conditions for return of refugees, return them home, it is essential to enhance the search process for a durable political settlement in Geneva under the auspices of the UN,” – said Putin.

According to Putin, the parties “agreed to continue close contacts between the ministries of foreign Affairs, military and special services to enhance the coordination of joint actions to settle the crisis in Syria, other regional issues”

Putin added that during the talks, discussed with Erdogan and held in the Iraqi Kurdistan independence referendum. “Russia’s principled position is known, it is stated in the statement of the MFA of Russia. Today, we in detail about this with the President, said,” the Russian leader said.