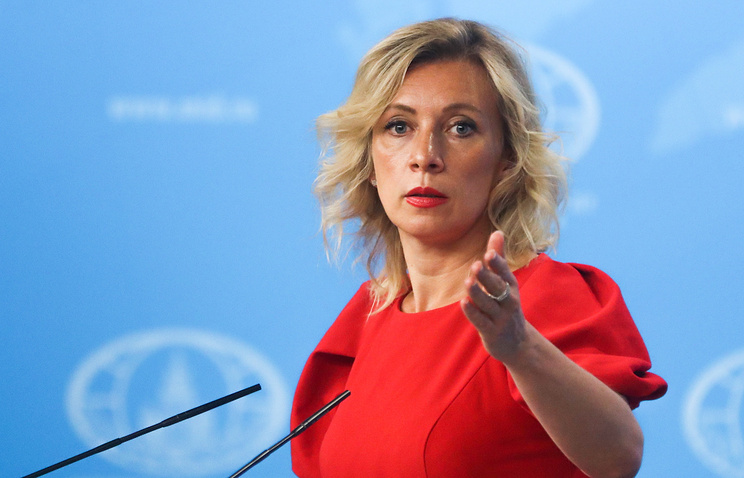 MOSCOW, October 12. /TASS/. The removal of flags from the buildings of the Russian Consulate in San Francisco and the Russian trade mission in Washington is a desecration of the national symbol.

This was stated on Thursday by the official representative of Russian foreign Ministry Maria Zakharova.

“Yesterday it became known about new – I can officially declare – hostile acts of the U.S. government against our diplomatic missions. Regard the incident as a desecration of the national symbol of Russia. Already stated in the USA strong protest”, she said.

“Of course no agreement on the withdrawal of Russian flags not allowed”, – noted Zakharov.

“It was made by people who previously uninvited had invaded Russian territory, broke down the gates, doors, and since then hosted there, not even as raiders, but as occupiers”, – continued the diplomat.

According to her, the statements of the us state Department that the rights of ownership of these buildings Russia had not been deprived of – “it’s blatant hypocrisy”. “Russian employees were not allowed there. In recent months, was fully closed the access of Russian representatives to the five facilities of the Russian departmenet in the United States. This history of Russian-American relations had never been,” – said Zakharov.

“In addition to the open attacks on the flags, the Americans do not hide that they also rummaged through the documents that were left in the Consulate General [in San Francisco], said the diplomat. And this despite the fact that under the bilateral Consular Convention, consular archives shall be inviolable. Always and everywhere inviolable, even after the termination of the consular post”.

Moscow reminds Washington of the principle of reciprocity in connection with the U.S. actions against the Russian diplomatic facilities, said Zakharov.

“Russian people, of course, are patient, but not indefinitely, especially when he sees such “cowboy” manner, she said. – We are repeatedly reminded that the principle of reciprocity has always been and remains the cornerstone for diplomacy.”